NAM says new EPA regs will harm industry.
Here’s where they will harm it the most. 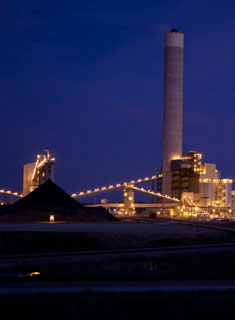 Located in Washington County, Ill., Prairie State Energy Campus includes a coal-fired generating plant and adjacent coal mine. The facility generates 1,600 MW of power, with 95 percent of the output already dedicated to eight Midwestern-based public power utilities. New and proposed EPA regulations are putting the squeeze on both coal-fired power plants and the industries that depend on them.
T

The projections, says the EIA, take into account the extension of the National Emissions Standards for Hazardous Air Pollutants to industrial boilers and process heaters, which addresses the maximum degree of emission reduction possible using the maximum achievable control technology (Boiler MACT). It says the policy, along with California’s AB 32 regulation of greenhouse gas emissions “have minimal effects on industrial energy consumption.” The National Association of Manufacturers begs to differ.

A Critical Review of the Benefits and Costs of EPA Regulations on the U.S. Economy delivers numbers sure to alarm certain states. The study, conducted by ndp|consulting, examines the cumulative impact of the EPA’s final Utility MACT and Boiler MACT rules, its still-pending Coal Combustion Residuals and Cooling Water Intake Structures regulations, and its expected Cross-State Air Pollution Rule and National Ambient Air Quality Standards for Ozone on the U.S. economy. Key findings of the report include the following:

“In the past 30 years, more than 2,000 regulations have been imposed on manufacturers,” said NAM President and CEO Jay Timmons. “It is already 20 percent more expensive to manufacture in the United States compared to our largest trading partners, and more regulations from Washington are only digging the hole deeper. As policymakers make critical decisions on the fiscal cliff and the challenges facing manufacturers, it’s important they understand the enormous impact of existing and pending regulations on manufacturers’ ability to grow and create jobs.”

The official names of the regulations are:

Cost projections vary widely between the EPA and NAM. NAM reports that industry estimates for compliance will be more than $22 billion a year, 70 percent higher than the EPA’s estimate of $13 billion a year. By disaggregating the EPA’s figures based on known capacities of “major source” boilers as well as the country’s 577 coal- and oil-fired power plants, the report offers figures by state. Crunching those numbers produces the following Top 10 lists that few would wish to make:

The NAM report says the difference between industry and EPA cost estimates “appears relatively small compared to the disagreements over the EPA’s proposed benefit estimates. Derived primarily from the projected lifetime economic contributions of people who would have died prematurely or would have been in poorer health if not for the regulations, the EPA’s estimates range from $182 billion to $531 billion.

NAM disputes those figures, citing other studies that do the same. And it insists on one “incontrovertible” fact: Electric power costs would increase, thereby causing a ripple effect on other aspects of those still-living citizens’ well-being.

“Utilities would incur costs of up to $142 billion in the short run to comply with only three of the dozens of EPA rules and would likely pass most of these costs through to their customers in the form of higher prices,” says the report. While residential consumers would be affected, so would companies. “As consumers of more than 28 percent of electricity production, manufacturers in the United States would see production costs rise,” the report continues. “That would lead to higher prices of manufactured goods and services, resulting in lost sales at home and abroad, which, subsequently, would encourage layoffs and discourage new hiring and investment, render exports less competitive and ultimately suppress U.S. GDP.”

The new rules are not keeping new clean-coal efforts from moving forward, with some trying to turn lemons into lemonade by touting the jobs created by the compliance work.

In November, Unit 2 of Prairie State Energy Campus's 1,600-megawatt power plant in Marissa, Ill., went live. Owned by eight Midwestern public power agencies and rural electric cooperatives and Peabody Energy, the plant is on its way to being the largest coal-fired power plant built in the U.S. in the last 30 years, as well as one of the cleanest. Designed as “the new face of coal,” PSEC is a coal mine and a power plant built on the same campus. Located in Washington County, Ill., an hour south of St. Louis, PSEC invested more than $1 billion in environmental emissions control equipment, allowing it to meet and exceed the newest U.S. EPA and state regulations. During peak construction, the PSEC employed over 4,000 union tradesman and woman paying over $1 billion in wages, and will employ over 550 permanent employees.

In late November, Louisville-based utilities LG&E and KU announced that $940 million in upgrades are about to begin at their Mill Creek Generating Station in southwestern Jefferson County, and that hiring by Zachry Industrial Inc. would open Dec. 3. “This is a large leap forward for LG&E and for our city, as it will help improve our air while also using the latest technology — and creating 700 jobs in the process,” said Louisville Mayor Greg Fischer. “Clean coal technology investments such as these help secure jobs for the miners in Kentucky, and create economic development opportunities for the commonwealth,” added Len Peters, Kentucky’s secretary of energy and environment.

The Kentucky Public Service Commission requires state utilities such as LG&E and KU to produce energy at the lowest-cost for customers. Coal has historically been the least-cost method to generate electricity. However, that is not always the case because of stricter EPA regulations, LG&E and KU said.