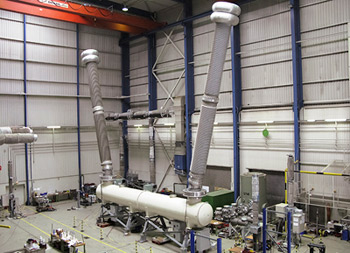 Siemens’ record-breaking circuit breaker will be deployed in India.
Photo courtesy of Siemens

n Jan. 1 Siemens announced it had developed the world's first circuit breaker capable of operating at 1.2 million volts. Ultra-high voltages (UHV) increase the capacity of power cables, thereby making it possible to transport large amounts of electricity with a relatively small number of overhead lines. The new circuit breaker is destined for a test installation in Bina, India. The Indian government is turning to UHV technology in order to supply its metropolitan areas with electricity generated in the country's mountainous regions. The 1.2-megavolt test transmission line is capable of carrying 8,000 megawatts of power. It therefore has more than twice the capacity of the 800-kilovolt lines currently in use.

The Minnesota Leadership and Investment in renewable energy legislation of 2007 set a goal of 25 percent of the total energy use in the state being derived from renewable energy resources by 2025. In 2010, Anoka-Ramsey Community College joined forces with biodiesel firms McGyan Biodiesel, SarTec and Ever Cat Fuels to produce a 10-acre energy crop demonstration site at the college's Cambridge Campus to grow crops for biodiesel fuel. Now, SarTec is seeking area farmers to expand that initiative. In 2006, SarTec developed an oil-to-biofuel process that converts triglycerides and free fatty acids into biodiesel fuel while occupying a small footprint, and producing no hazardous waste products. The college is also developing a work force curriculum for the industry, including new courses in mechanical foundations and biodiesel fundamentals. 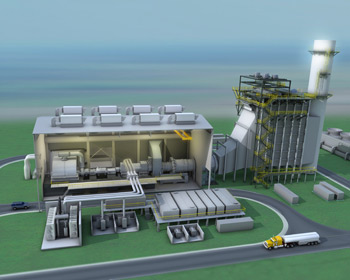 GE and EDF are co-developing the FlexEfficiency* 50 combined-cycle plant (illustrated here), which will be the most flexible and efficient gas-fired power plant in France.

In December Electricite de France (EDF), one of the world's largest utilities, and GE announced plans to jointly develop and showcase the first FlexEfficiency 50 plant to be connected to a national grid. The plant will showcase an unprecedented combination of flexibility and efficiency with low emissions, says GE. The new combined-cycle plant will be located at Bouchain, an existing EDF power plant site in northern France, and will produce 510 megawatts, enough electricity for 600,000 French households. The plant is expected to achieve greater than 61 percent efficiency at base load, which will conserve natural gas and reduce the production of greenhouse gases. Its operating flexibility will enable the plant to respond quickly to fluctuations in grid demand, paving the way for greater use of renewable resources such as wind and solar. Both EDF and GE will invest in the plant, which is scheduled to be brought into service in late 2015.

In June GE announced that Turkish project developer MetCap had selected the FlexEfficiency technology for the world's first integrated renewables combined-cycle power plant, to be built in Karaman, Turkey. In addition, GE commercial partners Harbin Electric in China and Toshiba Electric in Japan also have announced plans to introduce the product. 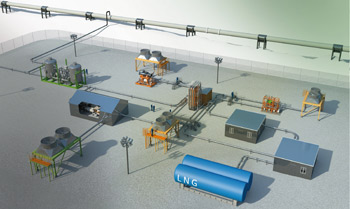 Micro LNG is a natural gas liquefaction plant designed for small-scale deployments, including as a substitute for diesel or fuel oil for powering remote locations both for industrial and residential use.
Image courtesy of GE

Another GE innovation, "Micro LNG," was unveiled in January at a conference in Florence, Italy. An integrated Micro LNG plant produces in the range of 50,000 to 150,000 tons per year of LNG. The biggest difference between traditional large plants, which produce in excess of 1 million tons per year, and Micro LNG is the end user the product is destined for. For the large LNG plant, the product is produced for international export, where plant economy of scale is among the most important factors. In Micro LNG, the distributed production is primarily aimed at local markets, where it is re-gasified and fed as pipeline natural gas or used for local power generation. Besides being a more environment-friendly alternative to diesel in heavy duty vehicle freight transportation and extra heavy duty off-road vehicles, LNG also is a suitable substitute for diesel or fuel oil for powering remote locations and can be used to capture methane fugitive emissions typically related to mining or upstream oil operations eligible for World Bank financing and emissions allowances. Using LNG as a substitute for diesel or fuel oil can reduce combustion emissions up to 25 percent.

An early February update from the California Manufacturers & Technology Association (CMTA) noted that Senate President Pro Tempore, Darrell Steinberg (D-Sacramento) has introduced SB 52, Environmental Quality: Jobs and Economic Improvement, as clean-up legislation to his SB 900 passed last year. SB 900 provided a method for fast tracking specific projects through California Environmental Quality Act (CEQA) requirements that have an investment of at least $100 million. SB 900 was pushed through the Legislature in the closing days of session last September. At that time, Senator Steinberg promised to address fixes in 2012 on a number of contentious issues. CMTA is calling for Steinberg's measure to be modified to include more green building certification programs — including the state's own CALGreen building code — than just the LEED system created by the U.S. Green Building Council.

A typically compelling piece in the Jan. 12 issue of The New Yorker chronicles the warts-and-all stories of both sides in a major environmental lawsuit filed on behalf of indigenous tribes in Ecuador against Chevron. This blog by the reporter provides the latest legal update, and what it may mean for Chevron assets beyond the Ecuadoran border.

A new entry for your must-read list is Washington Post reporter Juliet Eilperin's piece "Why the Clean Tech Boom Went Bust," published Jan. 20 in Wired magazine. Not in the mood for more reading? Listen to NPR's Terry Gross interview Eilperin.

In the latest in a series of statements at odds with federal policy, the American Council for an Energy-Efficient Economy on Feb. 2 lambasted the the Department of Energy's proposed new energy efficiency standards for distribution transformers because "they deprive consumers of billions of dollars in potential energy savings and millions of tons of harmful pollution reductions by favoring old transformer designs over innovative U.S.-made energy efficient technologies.

"According to DOE's analysis, the proposed weak standards for utility transformers will save about 50 terawatt hours (TWh) and net consumers about $3.7 billion over thirty years," said the ACEEE. "But the largest manufacturers of utility transformers suggested significantly stronger standards in DOE-sponsored public negotiations last year that would have quadrupled savings to nearly 200 terawatt hours and $14 billion net savings for consumers over thirty years. Some manufacturers of building transformers also proposed higher efficiency standards, which would have significantly increased savings from these products as well.

"What's most surprising is that DOE's proposal falls short of efficiency levels proposed by some of the largest transformer manufacturers," said Andrew deLaski, executive director of the Appliance Standards Awareness Project, a coalition of consumer, environmental and efficiency groups.

You may recall our visit to North Dakota oil shale country in "When the Land is Loud." Well, it's getting louder, say numerous recent reports on CNBC and elsewhere. Back in August, Halliburton said it expected to hire 11,000 workers in North America by the end of 2011, most of them in the Peace Garden State.

One window on the windfall comes via this report from Minnesota Public Radio.