Germany’s star global financial institution shines bright when it comes to renewable energy and sustainability. But will the German government’s cutback on solar incentives dim the solar industry’s outlook back home? 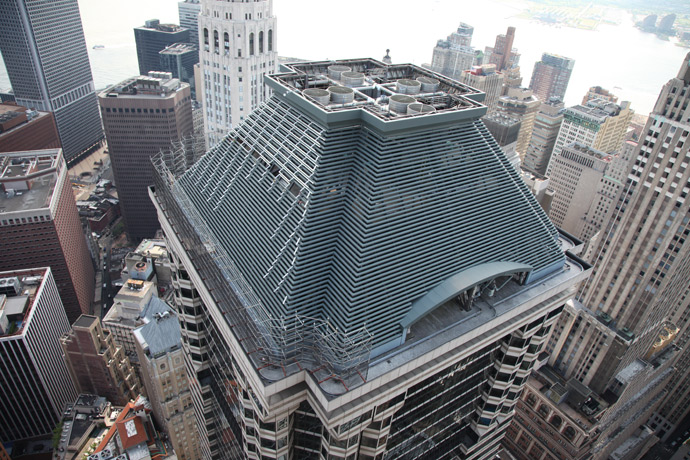 At an elevation of 737 ft. (225 m.), the Deutsche Bank Americas headquarters on Wall Street in Manhattan is the world’s tallest building with a solar photovoltaic array on top of it.
Photos courtesy of Deutsche Bank
I 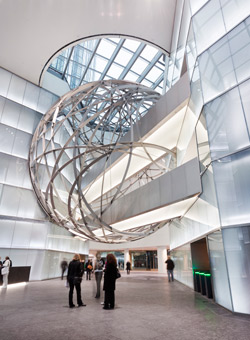 Deutsche Bank carried out an environmentally-aware and employee-friendly retrofit of its global headquarters complex in Frankfurt from 2007 to 2010.

t was no accident that Kevin Parker, global head of Deutsche Asset Management, delivered keynote remarks on climate change at the United Nations' Investor Summit on Climate Risk and Energy Solutions in New York in January.

Simply put, Deutsche Bank is a sustainability and renewable energy pioneer, whether you're examining its investment guidance or its own corporate behavior.

One recent manifestation of that focus was unveiled later in January, when Deutsche Bank announced the completion and operation of a 122.4-kW solar photovoltaic (PV) system at its 50-story Americas headquarters in New York, located at 60 Wall Street. The roof-mounted array will reduce the bank's electricity consumption from the grid and will decrease carbon emissions by 100 metric tons per year.

The PV system, located on the inclined south and east portions of the roof, is the largest solar PV array in Manhattan and is currently the highest elevated solar PV flat panel array in the world, topping off at 737 ft. (225 m.) above the ground. The installation was designed and constructed by Vanguard Energy Partners, of Branchburg, N.J., and features modules made by Mage Solar. Mage, citing client confidentiality, would not confirm whether the modules were made at the company's new plant in Dublin, Ga.

"We are firmly committed to being a leader in sustainability and innovation," said Seth Waugh, CEO of Deutsche Bank Americas. "This project is one part of a comprehensive global program to reduce the bank's consumption of fossil fuels and shift to more renewable sources of energy. Our goal is to neutralize the bank's global CO2 emissions by 2013."

The Wall Street project is the third solar project in North America completed by Deutsche Bank, including the two-phase installation of a 1.3-MW solar PV system at its Piscataway, N.J., office. That system, completed in 2011, has delivered a net-zero electric building. The bank is also now installing a 1.5-MW at its facility in Parsippany, N.J. Vanguard has been the bank's partner on all the projects.

The New Jersey projects benefited from federal tax breaks, as well as state incentives for renewable energy. On Wall Street, the company benefited from a city tax abatement (part of the PlaNYC program) and a federal business energy investment tax credit (ITC) equal to 30 percent of the value of the installation. That program continues to be in effect through 2016, while a separate 30-percent grant program known as the 1603 Treasury Grant expired on Dec. 31, 2011.

Deutsche Bank has increased its use of clean electricity from seven percent to 65 percent globally over the last four years. In the U.S. and Canada, 100 percent of its purchased electricity is generated from wind power. The Bank was recognized as a corporate pioneer and founder of the WindMade label, the first global consumer label that identifies products made with wind energy. It's also associated itself with such bleeding-edge projects as the French solar-powered aircraft Solar Impulse, which carried out a successful test flight last summer.

"Deutsche Bank is taking a holistic approach in its commitment to sustainability," says spokesman Klaus Thoma by email from Germany, "with a group-wide climate strategy, based on the three pillars as a financial intermediary, an eco-efficiency manager and a climate ambassador."

Parker's company, among others based in Germany, continues to back up its bets in its own house.

From 2007 to 2010, Deutsche Bank, with the architectural design guidance of MBA Mario Bellini Architects and technical architecture by gmp architekten, von Gerkan, Marg und Partner, carried out a complete refurbishment of its two-building headquarters in Frankfurt. The project has reduced overall energy consumption by 55 percent and water usage by 74 percent. CO2 emissions from building operations have been reduced by 55 percent and the use of power from renewable sources reduces the building's carbon footprint by another 34 percent.

Now certified in the rarefied air of LEED-Platinum and DGNB-Gold, the complex, originally constructed between 1979 and 1984, is using 67 percent less energy for heating and cooling. It was formally reopened in February 2011.

The company's priority on renewable energy solutions springs from the priorities of its home nation — even as Germany reconsiders the structure of its feed-in tariff system, its energy leadership is both a cluster builder and one of its leading exports in terms of expertise.

A study released in fall 2011 found that Germany is one of the world's top five countries in terms of renewable energy capacity and growth. That includes Deutsche Bank's corporate home state of Hessen, where the central region alone is home to 250 green technology companies that employ 7,400 people and represent approximately 10 percent of the region's manufacturing. Nearly half those companies were founded for the renewable energy marketplace within the past 20 years, and have built up a robust supply chain across different energy types and different areas of specialty expertise such as components, planning, engineering, facilities and systems.

Not to be outdone, the Berlin-Brandenburg region also is an acknowledged leader at home and abroad. The city itself aims to generate 40 percent less CO2 as emitted in 1990 by 2020. Roughly half the city's power comes from power plants with district heating and decentralized cogeneration, and roughly 3,200 PV facilities are currently producing one third of the solar energy that Berlin has as its goal for 2020. Berlin claims to have the highest concentration of solar energy R&D in Europe.Meanwhile Brandenburg has continued to live up to its desired nickname as the "wind energy state," by installing more than 4,000 MW of capacity.

According to Germany's Federal Ministry of Economics and Technology, in 2010 the installed generation capacity of photovoltaics in Germany increased by about 76 percent over the previous year. By the end of 2010, grid-connected PV systems were producing approximately 17,200 MW in Germany, and the PV industry's turnover was approximately €10 billion.

"The industry also plays an important role in Germany's job market, employing around 133,000 people in the industry, related trades and wholesaling at the end of 2009," said the Ministry. "German research institutions are setting internationally-recognized quality standards. State-of-the-art photovoltaic factories all over the world are equipped with German systems and machines, and planned and built by German companies."

But German Chancellor Angela Merkel recently has applied ure to alter the formula of the country's feed-in tariff, citing budgetary constraints. The country spends €7 billion (more than US$9.3 billion) a year on PV subsidies, out of a total 2010 spend of more than €13.1 billion (US$17.5 billion) in 2010. Similar incentives cuts are either being enacted or considered in Spain, the U.K. and Switzerland.

As if to head her off at the pass, the Paris-based International Energy Agency bumped up its scheduled study of the renewable energy sector, including an announcement on Feb. 23 that it will publish for the first time an annual medium-term report which analyzes that market.

"This publication on renewable energy — which is now the fastest growing sector of the energy mix and accounts for almost a fifth of all electricity produced worldwide — will join annual medium-term reports on oil, gas and coal, which the IEA already produces," said the agency.

"A portfolio of renewable energy technologies is becoming competitive in an increasing range of circumstances and countries," IEA Executive Director Maria van der Hoeven said in Berlin where she was presenting the recent IEA publication, "Deploying Renewables 2011: Best and Future Policy Practice," to German policy makers. She stressed that "significant policy effort, combined with continued economic incentives, is still needed to push a large portfolio of these technologies toward full competitiveness."

The nation's 2011 "Report on the Environmental Economy" stated that between 1990 and 2010 the country's energy productivity rose by 38.6 percent and raw material productivity by 46.8 percent. Last summer, meanwhile, the nation's share of electricity produced by renewables surpassed the milestone 20-percent mark.

But as recently as this week, Germany's federal government bumped up its own schedule, saying that scale-backs of the solar feed-in tariff originally scheduled for this summer now will begin March 9. Projects larger than 10 MW will receive no support. The German solar industry group BSW-Solar, as well as such companies as the globally successful SolarWorld, have exed dismay at the accelerated cuts.

The premier of Saxony-Anhalt Dr. Reiner Haseloff, among others, has stated that such cuts threaten solar company clusters in his state and others, and also strike at the heart of the country's overall sustainable energy policy.

A Deutsche Bank "Talking Point" memo from December analyzed the latest debates surrounding Germany's Renewable Energy Sources Act, first introduced 12 years ago, and modified more recently to account for a more rapid shuttering of all nuclear plants. Its conclusions were, like any good energy portfolio, mixed, but suggested that the principles behind the country's incentives program (if not its generous levels of remuneration) needed to be maintained.

"In 2011, the solar industry demonstrated a high level of innovative capability and cost degression," said a company statement. "Grid parity at household electricity prices was achieved in 2012, and it is anticipated that grid parity at the industrial electricity price of around 15 Eurocents will be reached in 2014. However, with the planned cutbacks, the Federal German government is completely choking the German market, which is viewed as a highly regarded global role model for renewable power generation. It is thus jeopardizing the agreed upon energy turnaround and jobs in Germany."

"It is completely incomprehensible to us how the Federal government can argue [for] these drastic reductions", said Dr. Karl Kuhlmann, the company's CEO. "The share of costs of photovoltaics in the Renewable Energy Act (EEG) levy of consumers continues to decline, but is used again and again by the energy corporations as a welcome justification for some quite significant increases in electricity prices. This is complete nonsense. The Renewable Energy Act levy has increased from 3.53 Eurocents in 2011 to 3.59 Eurocents in 2012, yet the suppliers in Germany increased the electricity prices by 3.4% on average at the start of 2012, many even higher. The high portion of renewable energy even had a considerable cost-cutting impact on the electricity exchanges. Photovoltaics is being made a scapegoat by the energy corporations in order to expand their own profit margin without any risks."

"The German market will lose its global significance with this decision", said Kuhlmann. "It is a sad state of affairs for Germany as a business location that the Federal government wants to turn the statutory framework conditions for our industry completely upside down within one year ... The industry is already in the middle of a transitional phase towards a competitive market. It is correct to arrange subsidies on a declining basis. However, this must be carried out in a controlled manner for the companies."

Some are saying the incentives contraction in Europe could lead to more focus on the U.S. solar marketplace — provided U.S. incentives don't run for cover as well. 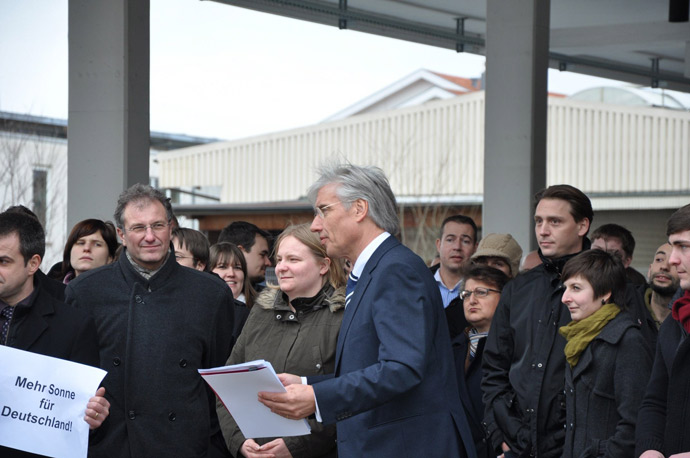