The New Year brings with it a slew of resolutions and reports calling for improved building performance. 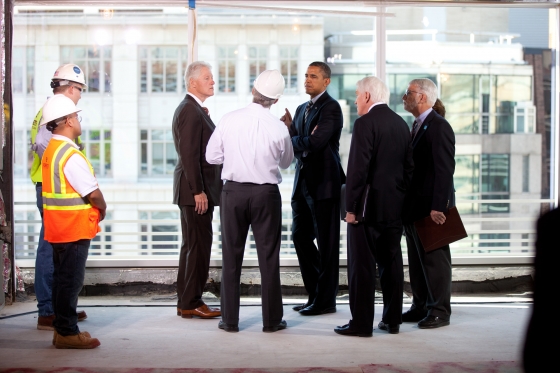 resident Barack Obama on Dec. 2 stood in a Transwestern property in the nation's capital to announce nearly $4 billion in combined federal and private sector energy upgrades to buildings over the next two years. It was the launch of the Better Buildings Challenge, aiming to make commercial buildings 20 percent more energy efficient by 2020. But it was by no means news to the commercial building sector.

The Better Buildings announcement builds on 14 private sector commitments announced at the Clinton Global Initiative America in June to make energy upgrades across 300 million sq. ft., and to invest $500 million in private sector financing in energy efficiency projects. The administration is also committing to performance-based contracting within the halls of government itself.

Transwestern, along with development partner DRI, Inc., is currently working on a significant renovation and modernization project at the very building Heard was able to show Presidents Obama and Clinton. The project will replace the exterior facade, primary mechanical, ventilation and control systems in order to reduce utility expenses and improve indoor environmental quality. To date, the energy efficiency measures that have been completed are saving almost $200,000 per year, or over $0.99 per sq. ft.

Johnson Controls, Inc., wasted no time jumping on the Better Buildings bandwagon, announcing the same day that it has installed and guaranteed the savings for more than 2,500 energy efficiency projects globally. The company said it has saved more than $19 billion in energy costs for public- and private-sector customers since 2000. Among the showcases is JCI's work with Oak Ridge National Laboratory (ORNL) in Oak Ridge, Tenn., on an $89-million energy savings performance contract with a guaranteed annual savings of $8.2 million. The company's performance-based contract with the Empire State Building is on target to save $4.4 million annually and reduce energy use by more than 38 percent.

Results of Johnson Controls' 5th annual Energy Efficiency Indicator Survey, a global survey of nearly 4,000 private and public sector building owners, reinforces the importance of access to financing to enable energy efficiency improvements. More than a third (38 percent) of the respondents reported that access to capital remains the top barrier to improving energy efficiency in their buildings.

In Cincinnati on that same day, a study was released by the Greater Cincinnati Energy Alliance showing that energy efficiency upgrades to the four-county bi-state area's homes and non-profit buildings alone can save area residents $60 million in lower energy bills and create more than 300 local jobs.

It Takes Energy to Procure Data

At the same time it seems more data is coming forward to support energy efficiency programs, the energy is being drained from data collection.

"The lack of updated energy data from the CBECS has left a void that the building industry will need to fill in order to have the metrics to achieve the numerous high-performance building goals set before us," said Institute President Henry L. Green. "We at the Institute are pleased to be able to facilitate the bringing together of industry stakeholders to streamline the collection, correlation and dissemination of data to achieve these goals."

The Institute established the High-Performance Building Data Collection Initiative on May 3, 2011, following the EIA announcements on future availability of commercial building energy use data through the CBECS. The Initiative focuses on identifying a path forward for collecting and disseminating data on all high-performance building attributes, not just energy use. Over the past several years, the building industry has increasingly expressed a need for additional building benchmark data on other high-performance building attributes, including safety and security, accessibility, cost effectiveness, water use and indoor environmental quality.

Non-residential green building activity is expected to triple between 2010 and 2015, according to McGraw-Hill Construction's "Green Outlook 2011: Green Trends Driving Growth."

Earlier this month, the Urban Land Institute announced the transfer of the activities and assets of the Greenprint Foundation into the newly formed ULI Greenprint Center for Building Performance.

With this action, said ULI, the organization "is continuing the operation of a unique industry-to-industry initiative through which leading real estate professionals exchange information and measure individual building and portfolio performance on the basis of energy use and carbon emissions."

The flagship product of the Greenprint Foundation is its Greenprint Performance Report™, which includes the Greenprint Carbon Index™ (GCX), a tool used by Greenprint Foundation members to gauge relative progress in reducing greenhouse gas emissions over time. The first volume of the report, issued in 2010, contained results obtained from performance during 2009 as a baseline measurement. The second volume, issued in 2011, had results for 2010 that included 1,623 properties in the Americas, Europe and Asia, and which covered a total of 31 million sq. m. (333.7 million sq. ft.) of commercial space. It showed a 0.6 percent reduction in greenhouse gas emissions from the previous year on the like-for-like portfolio of submitted properties.

On Jan. 10, the ACEEE reported that energy behavior programs aimed at reducing building energy use through change in employees' attitudes and behaviors can help build an energy-efficient office culture. Its report examined five energy behavior case studies, including the "Green the Capitol" initiative at the U.S. House of Representatives, the "Tenant Energy Management Program" in the Empire State Building; "Conservation Action!" at BC Hydro, Canada; an energy behavior campaign undertaken at a provincial governmental building in Canada; and the "TLC-Care to Conserve" program at the University Health Network of the University of Toronto.

Four common intervention approaches were shared by the five energy behavior programs: (1) setting the tone with the support of upper management and its public pledge; (2) building a team with a project committee and peer champions on board; (3) utilizing communication tools such as e-mails, prompts, websites, public meetings, and posters to reach target audiences; and (4) engaging building occupants by means of feedback, benign peer ure, and competition, as well as through performance-linked rewards.

A separate report released earlier this month by ACEEE is called "National Review of Natural Gas Energy Efficiency Programs," and documents the rapid growth of these types of programs across the U.S. Nationwide the budgets for these programs reached $942 million in 2010, saving 529 million therms — enough natural gas to take care of the needs of 695,000 average American homes. These programs have experienced rapid growth. In 2005 total budgets were $125 million nationwide. Most states now have natural gas efficiency programs available; ACEEE found that 40 states have such programs in place.

Liberty placed in the top 19 percent among the 340 real estate companies surveyed globally, to qualify for the top honor of being recognized as a GRESB "Green Star."

"The GRESB report is important not only because it helps us understand how our current sustainable practices measure up, but it also provides a tool that helps us identify the areas where we can make additional improvements," said Marla Thalheimer, Liberty's manager of sustainability, in a Dec. 12 release.

Liberty began developing its first project, a LEED-Gold certified office building in Allentown, Pa. (now known as The Plaza at PPL) in 2001. Since then Liberty has invested more than $1.5 billion in 43 USGBC LEED registered and/or certified sustainable office and industrial buildings, including Comcast Center, one of the tallest green buildings in the United States, and the Philadelphia Navy Yard, the only commercial park to include seven LEED registered and certified buildings.

In the last two years the developer has also received 79 Energy Star certifications for buildings in 14 states.

Among the tools Liberty uses is its BWAN (building wide area network) monitoring system, which allows property managers to view energy consumption in real time. To date, Liberty's energy reduction efforts have saved more than 30 million kilowatt hours over its 2008 baseline, which is approximately $3.3 million in cost savings passed through to tenants, and a greenhouse gas savings of the equivalent of removing 4,084 cars from the road.

As of Nov. 30, 2011, the following chart exhibits the Liberty portfolio's improvements by region:

A Nov. 2011 paper from AltaTerra Research called "Emerging IT Tools Reshape Building Energy Management" chronicles what it calls the "emergence of new application software, control systems, and IT-enabled devices, evolving Facility Resource Management (FRM) to a new level. Building upon the BMS, facilities professionals now have access to a range of add-on solutions for continuous commissioning, automated demand response, tenant engagement, and other advanced capabilities. And while ROI varies widely by implementation, such solutions are demonstrating attractive efficiency gains of 10-30+ percent."

The report is only available for purchase, at $2,295 for non-AltaTerra members. But an executive summary shares the following findings:

ALL HANDS ON DECK: The inaugural SelectUSA Investment Summit featured some compelling discussion and even some news amid the cheerleading. (Nov 7, 2013)