Brownsville is the latest location to experience the
satisfaction that comes from liquefaction. 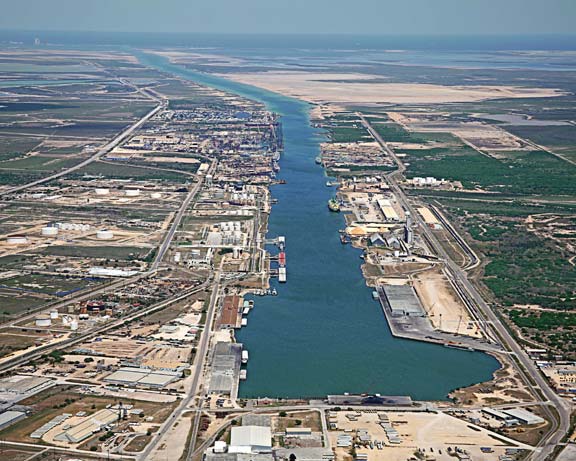 decade ago all the buzz was about the need for more liquefied natural gas terminals in the United States to import all that LNG the rest of the world was going to send.

The past two years have seen a literal reversal, as it's become apparent the rest of the world is interested in U.S. natural gas converted to liquid form. Examples abound, including Cheniere in Louisiana and Freeport LNG in Port Freeport, Texas, south of Houston.

Now the Port of Brownsville is getting in on the act. Yesterday the port's Board of Commissioners approved a lease option agreement with liquefied natural gas company Gulf Coast LNG Export, LLC for 500 acres (202 hectares) of Port property, following the Jan. 10 filing of Gulf Coast LNG's application with the United States Department of Energy seeking authorization to export liquefied natural gas out of a proposed facility on port property.

"While authorization has not been granted by the U.S. Department of Energy yet, Gulf Coast LNG Exports and Port officials are highly optimistic due to the significant demand for U.S. LNG and Gulf Coast's sound business model," said the release.

"The partnership between the Port of Brownsville and Gulf Coast LNG will include a multi-billion dollar direct investment by Gulf Coast LNG Export," said the port, "of which the majority will go towards the development of a natural gas liquefaction facility and LNG export terminal located on Port property, in addition to infrastructure improvements necessary to support this business."

"The huge amount of natural gas reserves developed in the United States in recent years," said Michael Smith, principal owner and CEO of Gulf Coast LNG Export, LLC, "and the significant international demand for LNG, will allow for the development of multiple LNG export terminals in the U.S. The United States is now believed to have more natural gas than it can use in a century."

"We believe the Port of Brownsville is in a strategic geographic location to assure the success of this project, and we envision this to be a long-term relationship with the Port," said Smith, who is also CEO and founder of Freeport LNG Development, L.P., which owns and operates a 2-billion-cubic-feet-per-day LNG receiving and regasification facility near Freeport, Texas.

Reached by phone, Smith says there is no demand for imported LNG, so the Freeport facility has not been sending out any gas. The only ship activity involves some temporary storage of LNG for re-export, keeping it always in liquid form. The Freeport facility is adding its own liquefaction and export capability.

Regarding the Brownsville decision, he says, "There was a site selection process, but the reality is that there is only a very limited number of ports with a deep enough channel that had all the necessary requirements to be an excellent site for an LNG export facility."

The scope of the site search extended from Brownsville to the Mississippi Gulf Coast. Smith says natural gas supply was the second most important criterion after good marine facilities. Then came a supportive port organization.

"It's critical for this siting to be near large amounts of natural gas production, so once you get east of Louisiana, it becomes less and less attractive," says Smith. "So our focus was Texas and Louisiana, even though we did go all the way into Mississippi. Brownsville is closest to the Eagle Ford [shale] production in southwestern Texas, and rose above the rest that aren't already planning an export facility."

Smith says the investment in Brownsville will be "north of $6 billion." Some tax abatements will probably kick in as they have done in Freeport, he says, but adds they were not a factor in the site decision. As for partners, he says, "I and my daughters own 100 percent of Gulf Coast LNG. We are not looking at any partners at this time."

Once the D.O.E. approves the application Gulf Coast LNG will initiate the review process with the Federal Energy Regulatory Commission to receive authorization to site, construct, and operate the terminal at the Port. The project is expected to be operational in 2018 and is forecasted to bring thousands of jobs during the construction phase and hundreds of jobs once the facility is operational. "This project falls in line with our mission of bringing more quality jobs to the region, and it also allows us to continue to diversify the type of cargo handled at the Port, while opening up a new industry for us," said Port Director and CEO Eduardo A. Campirano.

One hundred years ago the Brazosport/Quintana Island area where the Freeport facility is located was little more than a ghost town, due to hurricanes. Now the place is buzzing.

The plan to pursue liquefaction capability in Freeport was announced in November 2010, in partnership with Macquarie Energy, the North American energy marketing and trading arm of Australia's Macquarie Group. The facility will be capable of liquefying up to 1.8 billion cubic feet per day (Bcf/d) of natural gas. Each of the three proposed liquefaction trains will utilize a proprietary propane precooled mixed refrigerant process developed by Air Products and Chemicals, Inc.

The Freeport LNG site is located approximately six miles from open water off a ship channel that is maintained at a depth of 45 feet. This six-mile approach is one of the shortest of any LNG terminal in North America ("the distance of 5.5 miles from Port Freeport's sea buoy to FLNG berth compares more than favorably with that of 23.5 miles at Sabine Pass and 50 miles at Lake Charles," explains the company.) Freeport LNG has fully executed a 30-year site lease, which provides for extensions, with Port Freeport.

"Developers of LNG terminals are usually challenged to find an appropriate industrial site in a port with a sufficiently deep channel that is situated in close proximity to a pipeline system," explains the Freeport LNG website. "Freeport provides all of these characteristics; it is located near two large natural gas trading hubs (Katy and the Houston Ship Channel) and is connected to a vast network of intrastate and interstate natural gas pipelines." Now those pipelines will feed instead of being fed.

Even with the lack of imported LNG, the company's impact already is being felt: In 2010, Freeport LNG paid approximately $5,971,000 in taxes or other payments to city, county and state agencies, including more than $1.1 million to the Town of Quintana, nearly $2.7 million to Brazoria County entities including the local school district, and $2 million to the State of Texas.

The company intends to file its formal application pursuant to Section 3 of the Natural Gas Act (NGA) no later than the first quarter of 2012 and will request that FERC issue an order authorizing the siting, construction and operation of the Freeport liquefaction project no later than November 2012. "Freeport LNG plans to file its initial Project Implementation Plan no later than December 2012 and request authorization to commence construction by January 2013," says the website. "Freeport LNG anticipates a construction schedule of approximately 32 months to completion and start-up of the liquefaction project, which is currently envisaged to occur in January 2016."

Even without the Brownsville project, the Freeport LNG liquefaction and export facility will result in total economic benefits to the American economy estimated to be between $4.3 and $6.2 billion per year, according to the company, which cites Energy Information Administration figures estimating a minimum 100-year supply of natural gas in the U.S.

"The project is expected to indirectly create between 20,000 and 25,000 permanent additional jobs across the U.S. to support the exploration and production of natural gas to supply the project." 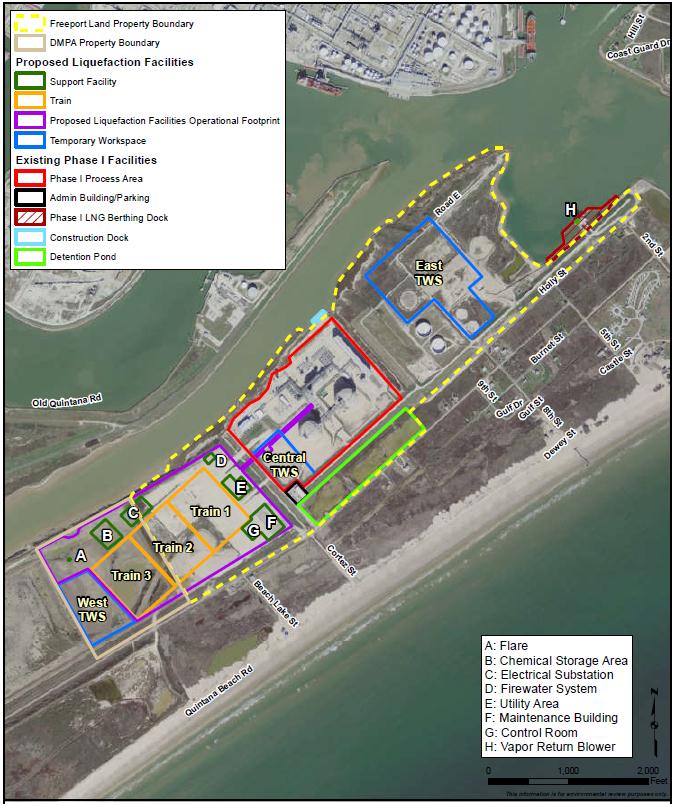