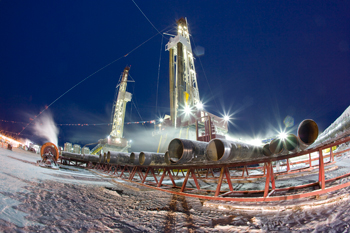 ast week Chinese state-owned giant CNOOC Ltd. entered into an agreement to acquire Canadian energy firm Nexen, Inc., for US$15.1 billion. "Nexen will complement CNOOC Limited's large offshore production footprint in China and extends CNOOC Limited's global presence with a high-quality asset base in many of the world's most significant producing regions – including Western Canada, the U.K. North Sea, the Gulf of Mexico and offshore Nigeria – focused on conventional oil and gas, oil sands and shale gas," said a CNOOC release.

The deal's benefits to Canada are expected to include establishing Calgary as CNOOC's North and Central American headquarters, which will manage Nexen's global operations and CNOOC Limited's existing operations in the region (comprising approximately US$8 billion of CNOOC's existing assets); intending to retain Nexen's current management team and employees; and enhancing capital expenditures on Nexen's assets. CNOOC has also stated that it will continue to support oil sands research at Alberta universities and participate in the Canada's Oil Sands Innovation Alliance.

Mr. Kevin Reinhart, interim CEO of Nexen, said "CNOOC Limited is one of the largest independent oil and gas exploration and production companies in the world. This transaction will allow for significant investment in our business and opens the door to new opportunities for our employees."

Nexen has an interest in more than 656,000 undeveloped acres (gross) in the Athabasca oil sands region. Shale gas is expected to be a source of growth for the combined companies in the future.

It's a hazard of the field: Sometimes a visionary project is a bit ahead of its time and has to pull back. And sometimes there's a failure to cross all the T's and dot all the I's. The latter appears to be the case with the Center for Innovation, Testing and Evaluation from Pegasus Global Holdings that we profiled last month. Due to land acquisition complications, the project has pulled out of Hobbs, N.M., and the site selection process has begun anew.

The ultimate resource for renewable energy statistics, programs and incentives by global region is at hand, courtesy of the Renewable Energy Policy Network for the 21st Century's Renewables Interactive Map and all that data the lies behind it.

The United Kingdom comes in first in a new energy efficiency ranking of the world's major economies, followed closely by Germany, Italy, and Japan according to the first-ever International Energy Efficiency Scorecard published July 12 by the nonprofit American Council for an Energy-Efficient Economy (ACEEE). On a scale of 100 possible points in 27 categories, the nations were ranked by ACEEE as follows: (1) the United Kingdom; (2) Germany; (3) Italy; (4) Japan; (5) France; (6) the European Union, Australia, and China (3-way tie); (9) the U.S.; (10) Brazil; (11) Canada; and (12) Russia.

The aircraft carrier USS Nimitz, shown under way earlier this month, took on 200,000 gallons of biofuel in preparation for the Great Green Fleet demonstration during the Rim of the Pacific (RIMPAC) 2012 exercise. Twenty-two nations, more than 40 ships and submarines, more than 200 aircraft and 25,000 personnel are participating in the RIMPAC exercise from June 29 to Aug. 3, in and around the Hawaiian Islands. 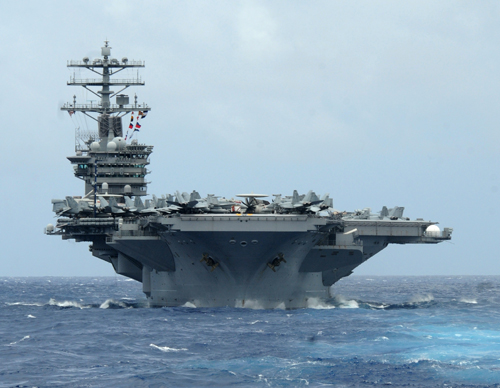 A recent report from the Milken Institute, "Turning Plants Into Products," examines the challenges facing the industrial biotechnology sector and identifies market- and policy-based responses. "There is much appeal for policymakers to invest in expanding the biotech-derived chemical industry. In the long term, it has environmental advantages and offers an alternative to foreign oil," said Joel Kurtzman, executive director of the Milken Institute's Center for Accelerating Energy Solutions. "In the short term, it offers the immediate benefit of rural employment opportunity."

Earlier this year The Site Selection Energy Report looked at solar energy on Dept. of Defense properties. In June, Philadelphia-based Eneref Institute announced it is convening a group within the U.S. solar thermal industry to work directly with the DoD's office of Installations and Environment to expedite actionable parameters for the implementation of solar heating and cooling on DoD facilities worldwide. Eneref Institute already leads an industry-wide initiative, "Solar Thermal Advantage", which is designed to increase adoption of solar heating and cooling in residential and commercial facilities. Specifics on the initiative and participation details can be found at www.eneref.org/initiatives/dod-solar-heating. Looking for case studies of solar heating and cooling project success? Go no further than right here.

Late last week Methanex confirmed it will relocate a methanol production plant from Chile to a 225-acre (91-hectare) site in Geismar, La. Canada-based Methanex Corp. will spend $550 million on the project, which will give the company its first U.S.-based methanol production facility in more than a decade. The new plant will create 130 new jobs, with an average salary of $56,250, plus benefits. The project will result in 996 new indirect jobs in Ascension Parish.

Methanex is the world's largest supplier of methanol, which can be found in everything from windshield washer fluid to recyclable plastic bottles, plywood floors, paint, silicone sealants and synthetic fibers. Methanol, a clean-burning alternative fuel, also is increasingly used in the energy sector, including direct gasoline blending, dimethyl ether and biodiesel. "The outlook for low North American natural gas prices makes Louisiana an attractive location in which to produce methanol," said President and CEO Bruce Aitken of Methanex. "It is also a large methanol-consuming region, possesses world-class infrastructure and skilled workers, and is a positive environment in which to do business."

To secure the project, Louisiana Economic Development offered Methanex performance-based grants of $3.8 million to offset infrastructure costs related to the project and $1.5 million to reimburse relocation expenses. In addition, Methanex will gain the services of LED's FastStart work-force development program. The company also is expected to utilize the state's Industrial Tax Exemption and Quality Jobs programs.

A recent Bain report for the oil & gas sector called "Shaping the supply of talent" offers this graphical interpretation of coming skills shortages in exploration and production companies: 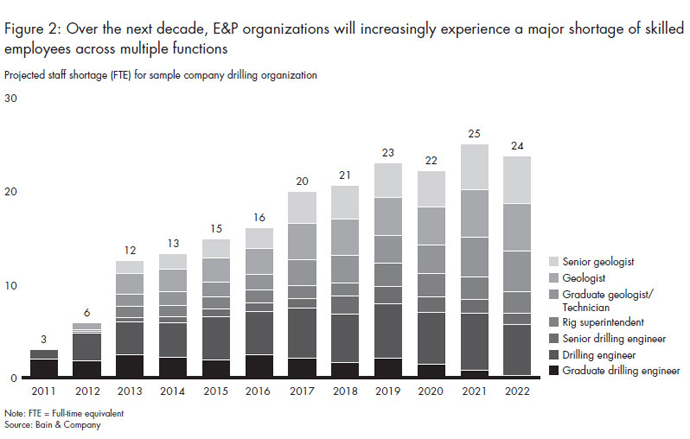 Late June saw the IRS issue guidance on the Qualified Energy Conservation Bond program, whose 20-percent energy savings test for public buildings and parameters for a "green community program" have sown some confusion in the marketplace and kept much of the allocated funds from being used. Ballard Spahr provides some guidance to the guidance. 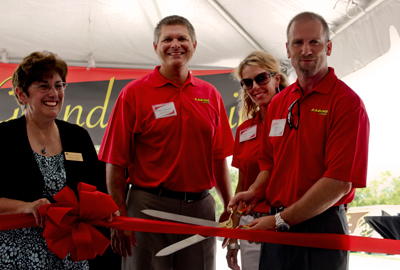 Pictured are (from left to right): Marge Connelly, Trustee for the Village of Schaumburg; Mike Johnson, President of Rabine Group; Cheryl Rabine, Direct of the Rabine Group Foundation; and Gary Rabine, CEO of Rabine Group.

Rabine Group, a service provider for paving, roofing, petroleum distribution and other construction needs, last week opened its new LEED-certified national corporate headquarters along with paving and roofing design centers located in Schaumburg, Ill. The Pavement Design Center features multiple pavement types and thicknesses utilizing surfaces of concrete and asphalt. Rabine's 200-stall parking lot includes: pervious concrete, porous asphalt, stamped concrete and asphalt, full-depth concrete and asphalt and UltraLot Whitetopping. This variation offers customers the opportunity to view many options including the industry's most advanced green pavements. "An example is the use of concrete which reduces site lighting cost by up to 40 percent," said the company. "It also minimizes the urban heat island effect, which allows for less energy to be used when heating or cooling the building."

Looking to develop your own green roof? American Rivers has a new Green Roof Savings calculator.