Not Set in Stone 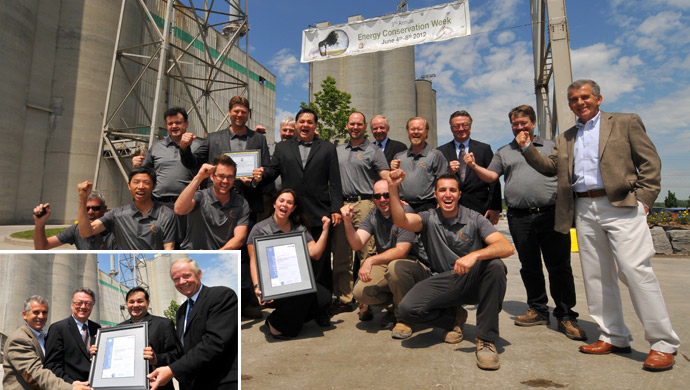 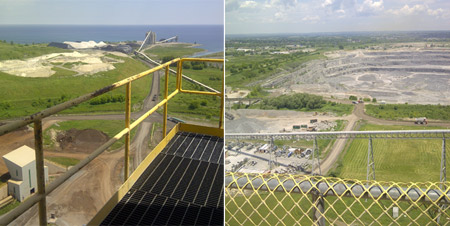 St Marys’ shipping docks on Lake Ontario in Clarington, and the company’s nearby quarry.

n June 7 a celebration took place in honor of St Marys Cement Inc.'s Bowmanville Plant in Ontario receiving North America's first International Organization for Standardization's ISO 50001 certification. St Marys was officially registered as the first North American recipient of ISO 50001, a new standard for industrial facilities seeking to manage their energy use, on November 15, 2011. The plant is located within the municipality of Clarington, located just northeast of Oshawa along the shoreline of Lake Ontario.

"The ISO 50001 program and cement plants are a logical fit," said Erik Madsen, CEO of St Marys Cement Inc. – Votorantim Cimentos North America. "Our Bowmanville plant has a rated capacity of over 1.8 million metric tonnes of product, operates 24/7 and consumes significant amounts of energy. Managing these energy costs is a no brainer — it is good for the environment and our bottom line."

It's also a great way to celebrate the company's 100th year in business. St Marys was founded in 1912 in the town of St. Marys, Ont., in the province's western portion, by John Lind and Alfred Rogers.

"Together they led a small group of investors in building a two-kiln, 180 tonne-per-day cement plant at a cost of $250,000," explains the company's website. "St. Marys is known as the Stonetown and the first settlers arrived there in the early 1840s, attracted by the area's natural resources. At the town site, the Thames River cascaded over a series of limestone ledges, providing the power to run the first pioneer mills. In the riverbed and along the banks, limestone was close to the surface and could be quarried for building materials. The founders Lind and Rogers capitalized on this natural raw material, and grew their business to be a major producer of cement in the province of Ontario."

Votorantim acquired St Marys in 2001. As one of the world's largest producers of cement, concrete and aggregates, Votorantim Cimentos also has plants in Argentina, Brazil, Bolivia, Chile, the United States, Uruguay, Paraguay, Peru and Portugal. In 2010, it grew by 9 percent in volume, reaching 26.3 million metric tons of cement sold. Among recent projects in its home country is a new distribution center in Brasilia announced in March, a new plant in Edealina (state of Goiás), which is slated to open in 2013, and a new 35,000-hectare (86,484-acre) environmental reserve established in partnership with the State of Sao Paulo.

That original St Marys plant site is a sustainability pioneer in its own right, having engaged in an alternative fuel demonstration project last year that used post-composting residual plastic film from the Orgaworld composting facility in London. The fuel consisted primarily of plastic bags and plastic film removed from compost generated from some residential organics collection programs. The company is determining if it would like to substitute an alternative fuel for conventional fuels on a longer-term basis.

"In regards to any future alternative fuels, in addition to material available from Orgaworld, St Marys Cement will source other suitable materials with similar composition, chemistry, and homogeneity as the fuel tested," said a company release, contingent on approvals from the province's Ministry of the Environment.

The Bowmanville project, meanwhile, has met with universal approval.

"The initiative to embrace this type of program is part of what makes St Marys a valued member of our community," said Clarington Mayor Adrian Foster. "Not only is it a large employer in the region, but it is a continent-wide leader for manufacturers, demonstrating a strong commitment to sustainability and energy conservation in a very competitive economic environment."

St Marys Cement Inc. is a wholly-owned subsidiary of Votorantim Cimentos, an international cement manufacturer based in Sao Paulo, Brazil. Headquartered in Toronto, the subsidiary supplies cementitious materials to the Great Lakes Region and is also a significant producer of concrete and aggregates for the Ontario market. The Bowmanville Plant has 127 employees and was established in 1968.

"Receiving this prestigious certification was not something that happened overnight," said Fabio Garcia, operations manager at the plant. "The origins of this certification can be traced back to 2005 when we were given the green light by senior management to move forward with an integrated strategy to reduce the plant's energy consumption. This quickly became an initiative supported, and made possible, by all of our employees.

"The most important milestones on the journey toward ISO 50001 certification was establishing our E=MC2 internal management and conservation committee," said Garcia. "This cross-functional team, with representatives from Finance, Human Resources, Environment, Quality Control, Maintenance, Mining and Production departments, identified and acted upon over 100 separate energy efficiency initiatives. Our success is driven from employee awareness of how we use energy. As a group, we then respond to challenges in very practical ways. Much of the energy saving measures required little capital expenditure or were done at no cost."

Each section of the plant is now monitored for energy use, and energy-intensive processes (such as milling, grinding and conveying) have been moved to off-peak hours wherever possible. Since 2005, implementing processes to achieve ISO 50001, electricity consumption has been cut by over 10.3 million kilowatt-hours (approximately the same amount of energy used by 880 Canadian homes in one year).

"The commitment to energy conservation, and the continual desire to improve processes by the entire staff at our Bowmanville plant, is the reason this is the first North American site to receive ISO 50001 certification," said Madsen. "The energy conservation elements of ISO 50001 certification means we are on track for over $1 million dollars in savings in 2012 alone." 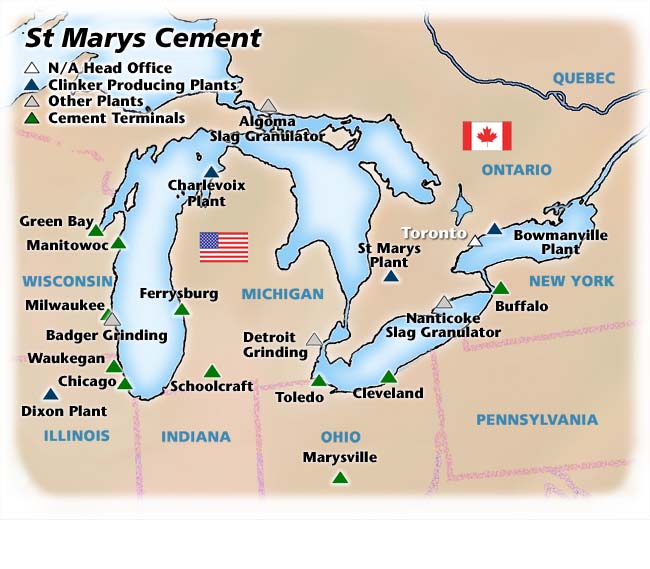