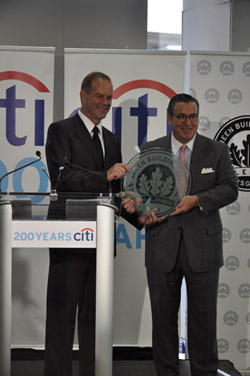 Citi announced the opening of its New York City flagship branch in Union Square in December 2010, and the branch earned LEED Platinum certification in May of this year. Pictured are Scott Horst (l.), senior vice president of LEED for the U.S. Green Building Council, and Don Callahan, chief administrative officer and chief technology & operations officer for Citi.

iti recently announced the LEED-Platinum certification of its flagship branch in Union Square in New York City, marking the bank's 200th LEED-certified project just as the company celebrates its 200th anniversary. The Union Square achievement is part of Citi's 10-year, $50-billion pledge made in 2007 to reduce its corporate environmental footprint through energy use and its own real estate portfolio. To date the corporation has directed over $36.4 billion toward the initiative.

"With so many physical locations around the world, our Citi Realty Services team can make a huge impact on the environment," said Don Callahan, chief administrative officer and chief technology & operations officer for Citi. "Through our sustainability efforts, we get the double benefit of helping the environment while reducing our corporate expenses," said John Killey, Citi Realty Services' global head of building operations. "We had a goal to reduce our greenhouse-gas emissions by 10 percent from 2005 levels by the end of last year, and our participation in the USGBC's programs helped us exceed that goal while cutting costs."

Other major Citi projects that have received LEED certification include two Citi office parks in the Dallas-Fort Worth area, a 50-story skyscraper in the New York City borough of Queens, and data centers in Georgetown, Texas, Frankfurt, Germany and Singapore. Citi expects to reach 263 LEED-certified projects by the end of 2012.

Watch this space later this summer for an interview with Citi real estate and operations executives about the program.

While talk of oilsands oil heading to Asia takes the headlines, other energy resources are readying to make that journey too. Shell, Korea Gas Corp. (KOGAS), Mitsubishi Corp., and PetroChina Co. Ltd. on May 15 announced they are developing a proposed liquefied natural gas (LNG) export facility in Western Canada, near Kitimat, B.C.

"This project will help make Canada's abundant supplies of cleaner-burning natural gas available to global markets including Asia's dynamic and fast-growing economies," said Shell. "It brings together partners with a unique combination of strengths: innovation, financial muscle, development expertise and access to important markets." Shell holds a 40-percent interest in the LNG Canada project (www.LNGCanada.ca), with KOGAS, Mitsubishi and PetroChina each holding a 20-percent interest.

The proposed project includes the design, construction and operation of a gas liquefaction plant and facilities for the storage and export of LNG, including marine off-loading facilities and shipping. LNG Canada will initially have two LNG processing units, or "trains," each with the capacity to produce six million tonnes of LNG annually, with an option to expand the project in the future.

Missives from our old friends at Tesla include a message from Bucharest apprising us that in May, racecar driver Rafael de Mestre started in Barcelona on an "Around the world in 80 days" tour (www.80edays.com) in a Tesla Roadster that has already taken car and driver to France, Switzerland and Germany, and arrived in New York on May 21, whence it took de Mestre 12 days to drive to San Francisco. After the U.S., the tour will head through China, Kazakhstan, Russia, Ukraine, Romania, Hungary, Austria and all the way back to Barcelona through Germany, Switzerland and France.

On June 22, Alcoa saluted Tesla on the introduction of the Tesla Model S electric vehicle, an all-aluminum premium sedan that accelerates from 0 to 60 miles per hour in 5.6 seconds, with zero tailpipe emissions. Tesla will be ramping up production throughout 2012 and plans to deliver 5,000 vehicles by year end. Reservations for the premium electric sedan currently exceed 10,000 units.

The latest reports from the American Council for an Energy-Efficient Economy are "Keeping It in the Community: Sustainable Funding for Local Energy Efficiency Initiatives," and "Gearing Up: Smart Standards Create Good Jobs Building Cleaner Cars," released earlier this week after the U.S. Court of Appeals for the D.C. Circuit's decision on EPA emissions standards applying to stationary sources. About the latter, National Association of Manufacturers President and CEO Jay Timmons had this to say: "The EPA's decision to move forward with these regulations is one of the most costly, complex and burdensome regulations facing manufacturers. These regulations will harm their ability to hire, invest and grow. By moving forward, the EPA is adding to the mounting uncertainty facing manufacturers of all sizes. We will be considering all of our legal options when it comes to halting these devastating regulations." 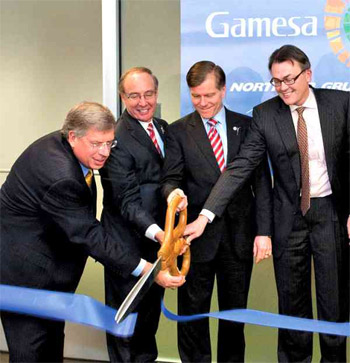 Gamesa in May announced it had completed its work to design an offshore wind turbine prototype, with plans to install a test turbine off the mid-Atlantic coast. The effort with Newport News Shipbuilding had been ongoing since Sept. 2010. But it's not all good news: Development has been suspended and the installation postponed.

"In 2010, both companies saw the future of offshore wind as promising, with the commercial market just a few short years away," said the company. "However, an analysis of current conditions indicates that a viable commercial market in the United States is still farther out, as much as three or four years away, at the earliest.

"While there have been improvements to siting in federal waters, regulatory issues still affect the level and speed at which projects can be approved. The pace of growth is further delayed by the lack of an offshore grid. In addition, uncertainty surrounding the Production Tax Credit, which will expire at the end of the year without congressional action, and the lack of a federal energy policy, hamper companies' ability to secure financing for projects. Without a mature offshore wind market in the United States, it is extremely difficult to justify the enormous expenditure of capital and utilization of engineering and technical resources that would be needed to build and install a prototype in the U.S."

"The decision is disappointing. However, our commitment to our country's energy efforts continues," said Doug Stitzel, Newport News Shipbuilding vice president of energy programs. "Huntington Ingalls Industries' ability to design, fabricate and deliver complex, marinized, safety-related components will be required to satisfy the growing needs for energy. We look forward to future opportunities for collaboration with Gamesa and other alternative energy leaders."

The joint Offshore Wind Technology Center, opened in February 2011 in Chesapeake, Va., will wind down at the end of the year as design work is completed. 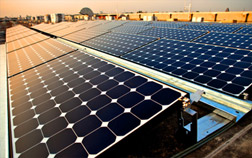 The largest operating solar power plant in Vietnam recently was installed at Intel's Saigon Hi-Tech Park facility in Ho Chi Minh City. The 1,092 high-efficiency photovoltaic panels on the roof of the Vietnam Assembly and Test Factory came online in April. The system is expected to generate about 321,000 kWh per year that will be consumed directly by the factory, reducing the flow from the local electrical grid.

The facility's opening coincided with the release of the U.S. Environmental Protection Agency (EPA) list of Top 50 Green-Powered Organizations, which ranks organizations that use clean, renewable electricity from a variety of sources including solar. Intel has topped the list every year since 2008. Solar sites converting sunlight to electricity are located at 15 Intel sites within four states, Israel and, now, Vietnam. Sunlight also heats nearly 100 percent of the water used in the Bangalore, India facilities. Intel estimates that the solar installations at its facilities generate 5.5 million kWh annually.

On June 19 the U.S. Department of Energy and U.S. Department of Commerce announced selections for three Centers for Building Operations Excellence that will receive a total of $1.3 million to create and deploy programs aimed at training and expanding current and incoming building operators. The DOE and Commerce's National Institute of Standards and Technology's Manufacturing Extension Partnership (NIST MEP) are jointly funding the Centers. The selected centers, part of the Better Buildings Initiative, are:

Mobile and distributed power generation system maker Clear Energy Systems earlier this month broke ground on a new $10-million, 158,000-sq.-ft. facility at Elliot Business Park in Tempe, Ariz., where up to 225 employees will work to make the Genesis 1000, which the company calls "the world's lightest, smallest one-megawatt generator set."

"I am pleased that our planned expansion in Tempe is moving forward, and we are one step closer to moving into our new home," said Tony Carmen, president and CEO of Clear Energy Systems. "We looked at many locations for our new site, and it was the collaborative work and support from Governor [Jan] Brewer, the Arizona Commerce Authority, GPEC [Greater Phoenix Economic Council], and the City of Tempe that ultimately sealed the deal for us to bring the Genesis 1000 to Elliot Business Park." The building is expected to open in February 2013.

On May 31, GE opened a new Innovation Center for Alternative Fuel Vehicles at the GE Capital Fleet Services headquarters in Eden Prairie, Minn. The center features a private half-mile driving course and a vehicle center that includes alternative fuel vehicles from 20 automotive manufacturers. With 6,000 square feet of classrooms and showrooms, the center also allows visitors access to ... surprise ... "a variety of products and solutions from GE's ecomagination portfolio."

"We believe that businesses, through their company fleets, can lead the way in putting drivers across the country and around the world into cleaner, more productive vehicles," said Deb Frodl, chief strategy officer for GE Capital Fleet Services and global alternative fuel leader for GE. Click here for more about the center and its research on fleet management. 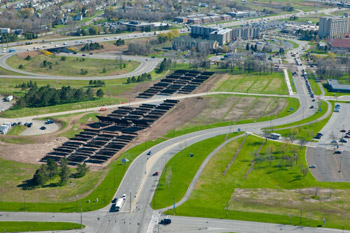 University at Buffalo's Solar Strand, launched in April, will generate enough electricity to power hundreds of student apartments and will reduce greenhouse gas emissions by 400 tons per year. UB and the New York Power authority have completed seven projects totaling $43 million since 2004, which cumulatively are projected to save the university over $1.3 million a year in energy costs.
Photo courtesy of UB

On Earth Day in April, University at Buffalo (UB) President Satish K. Tripathi and New York Power Authority (NYPA) President and CEO Gil C. Quiniones were joined by New York State and local officials, business organizations, environmental advocates and Western New York companies to mark the energizing of the UB Solar Strand, which will meet the electricity needs of hundreds of student apartments, cut energy costs and reduce the university's carbon footprint. The event followed the launch by Gov. Andrew M. Cuomo of his NY-Sun Initiative for bringing together and expanding multiple solar power incentive programs for spurring the growth of the state's solar economy and quadrupling annual development of solar power in New York State by 2013. The 3,200-panel, 750-kilowatt Solar Strand will generate enough clean, renewable power to help avoid the emissions of nearly 400 tons of greenhouse gases every year.

ARIZONA: Arizona Focuses on Encouraging Innovation, Not Regulating It (Jun 29, 2017)