Shale Gas Gets a Move On

Lack of fueling infrastructure has been the primary impediment to
widespread use of natural gas for transportation – until now. 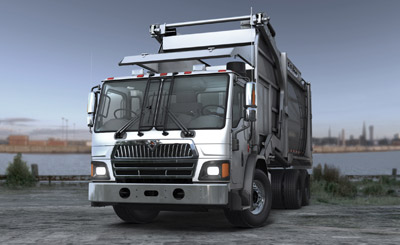 In unveiling its new LoadStar waste/refuse vehicle in May, Navistar announced that, in addition to a diesel engine, a Cummins compressed natural gas engine would be made available in Spring 2013.
Photo courtesy of Navistar
I 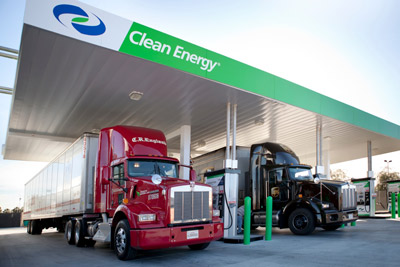 Clean Energy is partnering with truck maker Navistar and gas producer Chesapeake to roll out natural gas fueling infrastructure in select locations, such as this LNG fueling station in Las Vegas.
Photo courtesy of Clean Energy

t was only a matter of time. The flood of newly abundant shale gas, having already transformed site selection, the oil and gas supply chain and the midstream distribution network, has now turned to the transportation sector.

Approximately 70 percent of the nation's goods are transported by truck, and the cost of this mode of transportation is heavily dependent on the price of oil ($80/bbl at this writing), increases in which quickly ripple through to the cost of gasoline or diesel fuel.

With the current cost of gasoline around $3.53/gallon and the cost of diesel fuel around $3.72/gallon (as reported by EIA), the cost of transporting products remains an important factor in many manufacturing location decisions. Transportation costs also play an important role in consumer, business and government budgets as well.

Because of this oversupply, the price of natural gas is low and may possibly even dip as low as $1.50/MMBTU. The economics of using natural gas for transportation have been compelling for some time, because it not only saves up to 50 percent of vehicle operating costs but cuts emissions by as much as 30 percent. In addition, because the price is forecasted to remain low, managers now have the ability to plan without concerns for price volatility. And yet, natural gas only supplied less than three percent of demand for transportation in 2010. This is about to change.

Natural gas as a transportation fuel generally takes one of two forms:

The use of natural gas in vehicles has been limited by fueling infrastructure. So far, centrally fueled private, transit and municipal fleets have set the pace in converting their vehicles to natural gas over the last few years. The cities of Lafayette and Shreveport, La., and many other municipalities — particularly those near shale gas plays with local access to the low-cost natural gas — have been adapting to the new fuel to save money and reduce emissions.

Nordstrom, the high-end retailer, is testing several natural gas trucks in southern California for its distribution network and discovering that the reduced emissions of natural gas can play an important role in environmentally responsible "green" operations. Ryder truck rental began renting out more than 200 natural gas trucks in southern California last year as part of the SANBAG project, and the program has been so successful that the company is expanding it to Michigan and Arizona. The Natural Gas Vehicles Association (NGVA) estimates that natural gas vehicles will comprise 9 percent of fleets within 10 years.

The time has come for natural gas to hit the road. In 2010, petroleum-based liquid fuels accounted for more than 93 percent of demand for transportation fuel. The 3-million-plus long-haul big rigs on the road in the U.S. today burn 25 billion gallons of diesel per year, and smaller vehicles, including garbage trucks, transit vehicles and tractors, burn another 10 billion gallons of diesel annually.

This scale of demand, combined with the price advantage of natural gas over diesel (at least $1.00 per gallon), results in a compelling economic case for conversion, and the industry is taking notice. Eighty percent of trucking executives surveyed by PLS Logistics Services indicated that LNG held potential for long-haul trucking and approximately one-third were researching it for their internal use. Although the cost per vehicle is approximately $30,000 more than conventional diesel trucks, the expected fuel savings is estimated at $27,000/year — or as much as 40 percent less than diesel per mile.

Navistar, Freightliner, Kenworth, Peterbilt, and Volvo are now all manufacturing long-haul trucks to run on natural gas, and Chrysler, Ford and General Motors have introduced dual fuel pickup trucks. Navistar is expanding their line and estimates that within a few years, natural gas vehicles will comprise fully one-third of its sales. And the market clearly agrees. Commitments to natural gas trucks include the following:

Waste Management has announced that 80 percent of trucks purchased during the next year will be fueled by natural gas.

In 2011, UPS deployed 48 LNG-powered long-haul trucks and is expanding its LNG routes eastward from Los Angeles to Las Vegas to Salt Lake City, Utah. Denver is next.

Frito-Lay has announced plans to replace nearly all of its regional and long-haul fleet with natural gas vehicles, and already has deployed nearly 100 trucks this year.

Cross-Sector Partnerships Take Infrastructure to the Next Level

The primary concern heretofore cited by fleet operators and consumers alike has been the lack of fueling stations in the U.S. However, gasoline-powered vehicles can be retrofitted for natural gas to use on a dedicated dual-fuel basis, and the U.S. Environmental Protection Agency has just approved technology for similarly retrofitting long-haul diesel trucks for natural gas.

These dual-fuel vehicles can burn either fuel and switch from gasoline to natural gas and back with the flip of a switch. The ability to access both fueling networks is expected to reduce or eliminate this concern.

But drivers of natural gas trucks and cars won't have to depend on retrofitting for long. Natural gas producers and vehicle manufacturers are partnering with infrastructure developers and station chains in new ways to rapidly advance the technology, the availability of vehicles and accessibility to the fuel.

Clean Energy is leading the way with its partnership with Navistar and Chesapeake to facilitate the development and production of natural-gas vehicles and the infrastructure to supply them. This collaboration provides Chesapeake with a market for its natural gas. Clean Energy, the infrastructure developer, has ambitious plans of adding more than 150 fueling stations by the end of 2013.

By targeting certain high-leverage locations and routes, the partners can reach a significant share of the diesel fuel market. Major initial route segments include the Texas triangle of Houston, Dallas-Fort Worth and San Antonio; Southern California to Salt Lake City; Los Angeles to Dallas and Houston; and Atlanta to Chicago. The goal is to have 70 vehicles up and running in 33 states by the end of 2012. Clean Energy is also partnering with Pilot Flying J, owner and operator of 550 stations that account for approximately 25 percent of all long-haul diesel fuel sales, to invest more than $150 million and add LNG lanes to more than 150 U.S. truck stops in the U.S. by the end of 2013.

"Clean Energy's efforts in bringing natural gas fueling stations to the US will allow goods to move coast to coast, border to border by the end of 2012. Shippers and fleets will be able to reduce costs and emissions and predict their costs with confidence in a low-price-volatility environment."
—James N. Harger, Chief Marketing Officer, Clean Energy

In Canada, Shell has announced a partnership with Flying J to offer LNG to Alberta fleet customers at selected stations. Shell and TravelCenters in early June announced a separate deal in the U.S. to construct 200 LNG fueling stations at 100 of TravelCenters' U.S. truck stops. Chesapeake and GE have also announced that they will be collaborating on natural gas infrastructure, adding 250 CNG stations beginning 2012.

The abundance of natural gas, available in quantities as never before, increases the supply of a variety of fuels and opens up opportunities in transportation never before attainable on this scale. Broad availability of CNG and LNG fueling pumps will put some areas in position to deliver those fuels, transforming transportation across all sectors, and reducing costs and emissions in the process.

Charlotte Batson is Owner and Principal of Batson & Company, an energy and economic development consultancy that helps communities reap the economic benefits of shale oil and gas while mitigating the environmental and community impacts to improve overall quality of life. A petroleum engineer experienced in the oil and gas industry and economic development, Batson has addressed the topic of shale gas in a series of ground-breaking articles for Site Selection. She also edits and produces the upcoming Unconventional Energy News: The Latest from the Revolution in Oil & Gas.