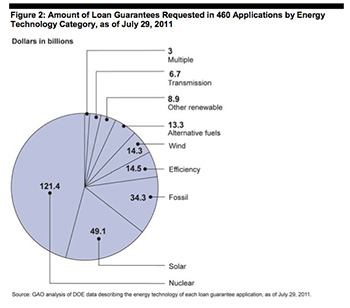 s Congress grows more concerned about stimulus-backed energy projects, analysis by the U.S. Government Accountability Office of renewable energy project activity across the federal government found that 23 agencies and their 130 subagencies implemented nearly 700 renewable energy initiatives in fiscal year 2010. The Departments of Defense (DOD), Agriculture (USDA), Energy (DOE), and the Interior were collectively responsible for almost 60 percent of all initiatives. The initiatives supported a range of renewable energy sources, and the most commonly supported sources were bioenergy, solar, and wind.

Looking for the latest energy-related incentives programs? The best tool to use is one funded by the U.S. government, the Database of State Incentives for Renewables & Efficiency, which has recently updated its very handy incentives search engine.

Looking for more energy efficiency from the federal government? How about taking the Solar Decathlon to where the sun shines? The Solar Decathlon challenges collegiate teams to design, build and operate solar-powered houses that are cost-effective, energy-efficient and attractive. The DOE announced earlier this month that Solar Decathlon 2013 will take place October 3-13, 2013, at the Orange County Great Park in California (pictured). It will be the first time that the biennial event has been held outside of Washington, D.C. 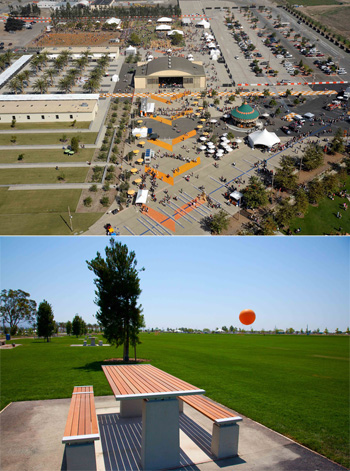 A new episode of the Better Fuels ent video series from the Advanced Biofuels Association takes a close look at the Dynamic Fuels facility in Geismar, La. The plant produces nearly 5,000 barrels of renewable diesel a day from animal fats and greases as "drop-in" fuel that can replace 100 percent of petroleum diesel in a diesel engine without engine modification. Last December, Dynamic Fuels was awarded a contract to supply the U.S. Navy with approximately 425,000 gallons of renewable fuels — the single largest purchase of advanced biofuel in history.

In other sector news, the Biofuels Center of North Carolina has opened the Biofuels Company Accelerator to support the development of biofuels and related technology projects, researchers, and companies. A first component of North Carolina's Biofuels Campus, in Oxford and Granville County, the facility provides leased laboratory facilities, shared equipment, and business development support from both the Center and other agencies. 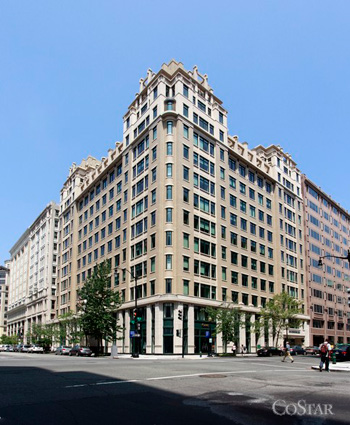 The Nuclear Energy Institute (NEI), represented by UGL-Equis, has leased 50,861 sq. ft. (4,725 sq. m.) on three floors at 1201 F Street N.W. (pictured) in Washington D.C. NEI, a policy organization of the nuclear energy and technologies industry, located at 1776 I Street N.W. for the past 20 years, will be moving 140 employees on or about January 1, 2013. The team evaluated 30 properties and eventually toured 12 of them before selecting 1201 F Street N.W., a 12-story, Energy Star Award-winning multi-tenant office building with three levels of parking located across the street from the Metro Red Line. Convenient access for NEI members and likeminded organizations to the Red Line across the street from the Metro Center and the Orange, Blue and Red lines that provide access to Capitol Hill and commuter destinations was a critical requirement for NEI. The fact that the building is in the process of obtaining its LEED Existing Building designation was also a determining factor. 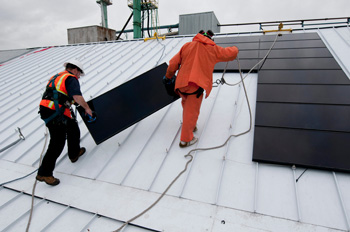 CertainTeed Corp. announced on Leap Day that it has made the leap with its own products, and has now installed CertainTeed® PowerMax® photovoltaic modules on its manufacturing facility in Portland, Ore. (pictured). "Installing the PowerMax system at the Portland plant was a logical step in reducing the overall environmental impact of our operations and strengthening our position in the solar roofing market," said Tom Smith, president of CertainTeed Roofing. "It sends a clear signal that we fully stand behind our solar roofing products." 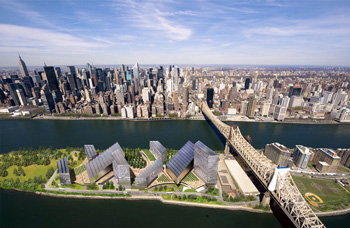 Among the green building projects in the Big Apple is the newly proposed 2-million-sq.-ft. (185,800-sq.-m.) campus from Cornell University and Technion-Israel Institute of Technology to be built on Roosevelt Island. The campus is planned to include a solar array that will generate 1.8 megawatts at daily peak and a 400-well geothermal field, which uses the constant temperature of the earth to cool buildings in the summer.

Looking to save money in New York City? The Con Edison C&I Green Team will host its Energy Efficiency Summit on Tuesday, May 1, 2012, at the Hilton New York to explore the latest energy-saving building technologies and learn about the incentives and rebates available to transform commercial and industrial properties into high-performance buildings.

In related news, New York Mayor Michael Bloomberg and City Council Speaker Christine C. Quinn announced in February that newly adopted green building codes are putting the city on track to meet PlaNYC's goal to lower carbon emissions, energy consumption and waste. According to a new report, the adoption of 29 recommendations will divert 100,000 tons of asphalt from landfills each year; reduce greenhouse gas emissions citywide by 5 percent; lower the costs of lighting energy by 10 percent; and provide $400 million in savings by 2030. A plethora of information can be found through the website of the Urban Green Council.

The Electric Power Research Institute (EPRI) in February released a study that provides an assessment of the physical and geographic capacities to site nuclear, advanced coal and solar plants throughout the United States. The study shows potential electric generation capacity of 158 gigawatts (GW) for new advanced coal (with projections for sites in Montana, Illinois, Missouri, Arkansas, Texas, Louisiana, Tennessee, Alabama and Georgia); 60 GW/18 GW for dry-cooled and water-cooled concentrated solar power, respectively (with projections for sites in California, Idaho, Montana and Wyoming) and 515 GW for large nuclear reactors and 201 GW for small nuclear reactors (with projections for sites throughout the United States). 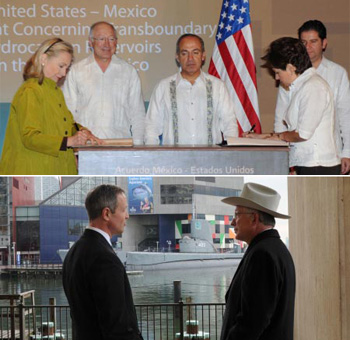 Secretary of State Hillary Clinton (left) and Mexican Minister of Foreign Relations Patricia Espinosa (right) with Secretary Salazar, Mexican President Felipe Calderon, and Mexican Minister of Energy Jordy Herrera sign an agreement on the exploration and development of oil and natural gas reservoirs along the United States’ and Mexico’s maritime boundary in the Gulf of Mexico.  Maryland Gov. Martin O'Malley (bottom) speaks with Secretary of the Interior Ken Salazar at the Baltimore World Trade Center in Baltimore, Md.
Photos by Tami A. Heilemann-Office of Communications, U.S. Dept. of the Interior

Secretary of the Interior Ken Salazar on Feb. 20 joined Mexican President Felipe Calderon, Secretary of State Hillary Rodham Clinton, Mexican Minister of Foreign Relations Patricia Espinosa, and Mexican Minister of Energy Jordy Herrera in Los Cabos, Mexico, at the signing of an agreement on the exploration and development of oil and natural gas reservoirs along the United States' and Mexico's maritime boundary in the Gulf of Mexico. As a result of the agreement, nearly 1.5 million acres (607,050 hectares) of the U.S. Outer Continental Shelf will now be made more accessible for exploration and production activities. Estimates by the Department of Interior's Bureau of Ocean Energy Management (BOEM) indicate this area contains as much as 172 million barrels of oil and 304 billion cubic feet of natural gas.