A Keystone State site is the preferred choice for a potential mega-complex from Shell. 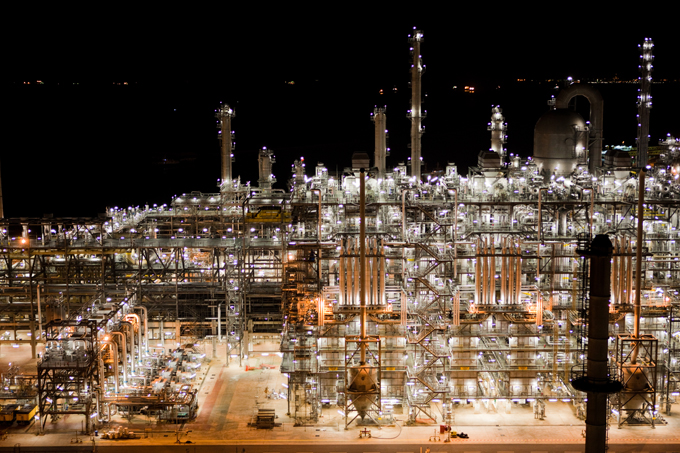 Once all steps are completed, Shell’s proposed petrochemicals site near Monaca, Pa., would include components similar to those present at its recently launched Shell Eastern Petrochemicals Complex in Singapore, which includes an ethylene cracker and monoethylene glycol facilities.
Photo courtesy of Royal Dutch Shell
S 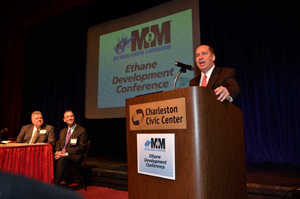 West Virginia Gov. Earl Ray Tomblin speaks at an ethane development conference. Tomblin said his state will benefit from the Shell project even though it’s in a neighboring state. His team continues to pursue other major petrochemical complex projects said to be considering Appalachian locations.
Photo courtesy of West Virginia Office of the Governor

hell Chemical LP on March 15 signed a land option agreement with Horsehead Corporation to evaluate a site in western Pennsylvania for a potential $2-billion petrochemical complex. The complex would include an ethane cracker that would upgrade locally produced ethane from Marcellus Shale gas production. The site is located in Potter and Center Townships in Beaver County near Monaca, Pa.

But it's only a first step toward a fully realized project.

"There are many hurdles to clear before we can even take an investment decision to build the proposed petrochemical complex," clarifies Shell spokesperson Emily Oberton. "We need to confirm the suitability of the site, secure ethane feedstock supply, complete the engineering and design work, confirm the support of customers for our products, receive all the necessary permits and confirm that the project is economically robust and competitive.

"We are moving our zinc production operations to our new plant which is under construction in North Carolina and expected to startup during the third quarter of 2013," said Jim Hensler, Horsehead president and CEO. "We believe this option provides the best value proposition for Horsehead among the several alternatives we are considering for this site."

The option, if exercised, would require Horsehead to vacate its Monaca site by April 30, 2014. According to a 10-K filed six days before the Shell announcement, Horsehead's union contract at the Monaca site expires on that same date. As of the end of 2011, Horsehead employed 118 salaried personnel and 470 hourly personnel at the Monaca location, where it operates a 150,000-ton-per-year capacity electrothermic zinc smelter and refinery. A 110-MW coal-fired power plant the company used to generate its own electricity was idled in September 2011 when the company was able to enter into a power purchase agreement that meant lower costs than the cost of self-generated power.

The company also needs funds to complete its North Carolina facility. In its 10-K statement, the company said it had spent $42 million on the project since announcing it during the third quarter of 2011. "Total capital expenditures for the construction of the new zinc facility are currently estimated to range from $350 million to $375 million," said the company. "We continue to develop financing alternatives for the balance of the capital that may be needed to complete the project. Capital expenditures for 2012 are estimated to be approximately $207 million, which includes $192 million related to the new zinc facility."

Neither the Commonwealth nor Shell have released the incentive package. But Pennsylvania's legislature has passed multiple legislative measures to encourage projects such as Shell's, including revised rules on zoning and drilling fees and the expansion of a tax incentive program to include projects valued at more than $1 billion.

"While incentives are helpful in strengthening the competitiveness of our project, we cannot just rely on incentives," says Oberton. "We have to make our project fundamentals robust — that means acquiring competitive feedstock, designing a fit-for-purpose facility that uses the latest technology to bring cost and energy consumption down, negotiating competitive transportation costs for our products, building a strong customer base, getting a productive and skilled work force to build and operate our facility and building a strong relationship with the community."

An oft-cited study from the American Chemistry Council earlier this year says as many as 10,000 permanent jobs could be created as the result of a single such ethane cracker-based complex. Another 10,000 construction jobs could also be in play.

"If the project goes forward, there would be employment opportunities in the construction phase and afterwards when the plant is operational, ultimately providing hundreds of full-time jobs at the site," says Oberton of direct employment potential at the Shell project alone.

"These included access to the liquid rich shale gas region of Marcellus, current and future infrastructure placement, availability and composition of the work force, the overall business climate of each state, and the suitability of the available sites for a major petrochemical complex," said Oberton. "The preferred site in Pennsylvania is near liquids-rich shale acreage and has superior transportation logistics."

In addition to an ethane cracker, Shell is also considering polyethylene (PE) and mono-ethylene glycol (MEG) units to help meet increasing demands in the North American market. Much of the PE and MEG production would be used by industries in the Northeast.

"Our proposed petrochemical complex would provide an outlet for ethane for regional upstream natural gas and ethane producers, who would then be able to grow and consequently provide more jobs to local workers," says Oberton. Finally, there are many secondary industries and services that would expand in the area, for example, transport."

Shell's decision was met with some disappointment by leaders in Ohio and West Virginia, who battled right up until the end. Among other things, Ohio. Gov. John Kasich signed an executive order on March 12 instituting an emergency rule giving the Division of Industrial Compliance exclusive jurisdiction over the construction of shale gas processing plants in Ohio.

"With many companies preparing to build new, shale-related processing facilities in the very near future, this Executive Order will allow the work of the plans examiners and Building Code Compliance to begin immediately," said the governor's office. "Because the product processed by these facilities — Utica shale gas located thousands of feet below the surface — crosses manmade borders of various municipalities, the division is uniquely qualified to manage these projects in a consistent and uniform way statewide. Previously, construction plans would be submitted to a local building authority, where one exists, and the local authority would oversee the project through its completion. Moving jurisdiction to the state provides the benefits of consistency, expertise, speed and enhanced safety, with no loss to local authorities, where they exist."

The new order may not have helped lure the Shell project, but it will surely appeal to Chesapeake Energy Corp., which on March 13 announced it had entered into a partnership with M3 Midstream LLC and EV Energy Partners, L.P. to develop a $900-million midstream services complex to provide necessary infrastructure to process natural gas and natural gas liquids (NGL) in the liquids-rich Utica Shale play in eastern Ohio. A cryogenic processing facility will be located in Columbiana County. NGLs will be delivered to a central NGL hub complex in Harrison County. Project leaders said it would provide "hundreds of high-quality, well-paying, new jobs for Ohioans."

"Lorain benefits," he says. "There are two projects from our steel manufacturers U.S. Steel and Republic Steel that are going to be supplying that industry in the eastern part of the state." Republic said in November it would invest $85.2 million and add 450 jobs, just a few years after having to cut 700 jobs. A state grant document lists U.S. Steel Tubular Products' project at $94 million and 80 new jobs, but an earlier announcement said later phases could bring total investment to as high as $250 million.

As for the Marcellus, Jerry Swank of Swank Capital of Dallas said at the Marcellus Midstream Conference earlier this month that almost $10 billion a year will be invested in the region over the next 10 years on wells alone. The midstream figure? More than $110 billion over 20 years, according to a report on his speech in West Virginia business newspaper The State Journal.

"Naturally, we are disappointed by this decision," he said March 15. "We worked extremely hard to develop a competitive proposal. Ultimately, the decision was related to site-specific factors beyond our control. The decision by Shell to locate the site near Monaca, just 10 miles across the border, is not only good for Pennsylvania but also for West Virginia. The economic activity from this plant will not be confined to Pennsylvania. West Virginia will benefit from this decision. 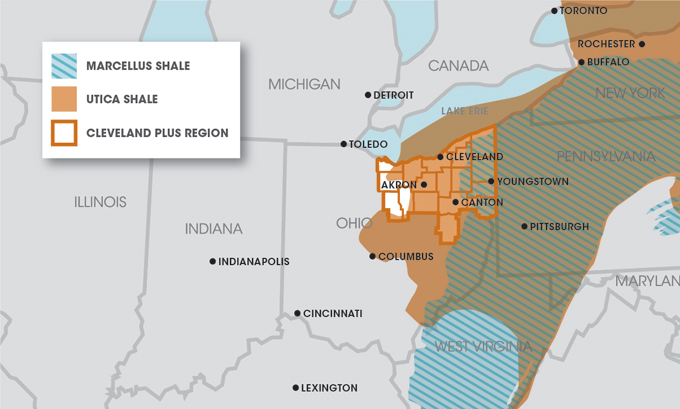 This map furnished by Cleveland Plus illustrates how the shale-gas economy extends into Greater Cleveland,
as well as into many other metro areas beyond Appalachia.