A town near Lyon sees the latest outgrowth of
Bosch Solar’s global manufacturing network at a former automotive plant. 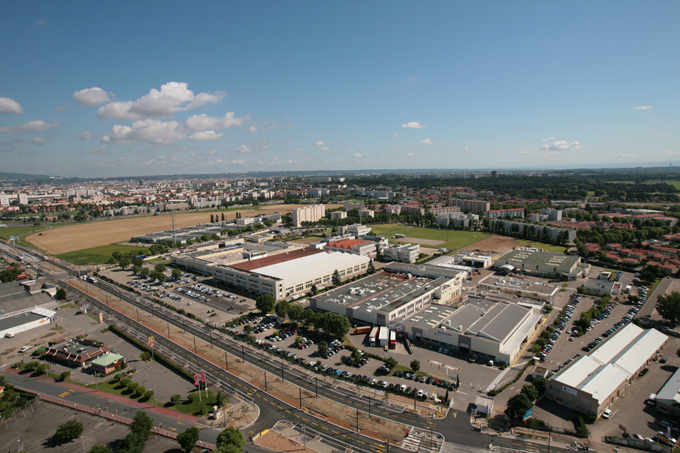 The French town of Vénissieux, near Lyon, saw 200 jobs at a Bosch automotive factory saved by the company’s Bosch Solar division, which has redeveloped a portion of the site for solar module production (below) in a mere eight months.
Photos courtesy of Bosch Solar
W 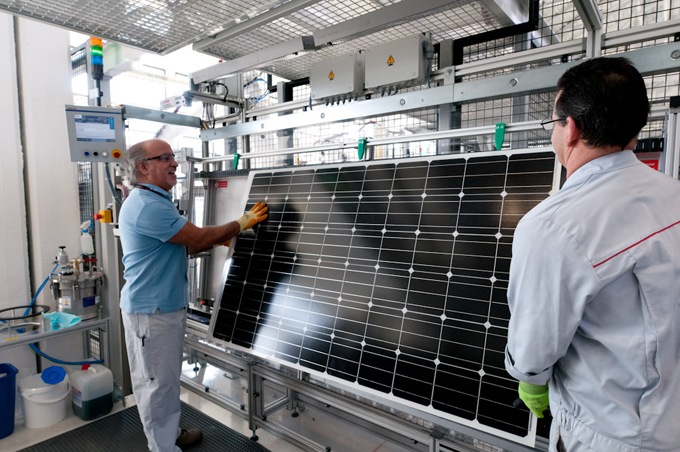 hen you're a US$68-billion company with more than 300,000 employees across multiple industries, it's always possible for asset disposition to be an internal affair. It's also possible to seek out sunnier climes when shadows are lurking at home.

Bosch Solar Energy has begun operation of a new manufacturing line for crystalline solar modules in the French town of Vénissieux, near Lyon, where the company's automotive arm had until recently operated an automotive plant.

Completed in only eight months, the factory has a peak capacity of 150 megawatts. At full utilization, which Bosch expects to reach in July, 2,000 units will be produced daily, equating to an annual volume of 600,000 units per year, or the energy demand from 51,000 French households.

With the new factory, Bosch has managed to keep 200 jobs in Vénissieux. Production of common rail injection pumps at this diesel site was discontinued last year due to declining demand. A part of the plant then had to be abandoned.

"The successful redevelopment in Vénissieux is the result of an exemplary and unique social dialogue," said Guy Maugis. With the joint efforts of the factory management, the corporate management of Bosch France, employees, Bosch managers in Germany and all staff representatives in collaboration with an economic expert, the "Agence de Développment Économique de la Région Lyonnais" (ADERLY), and the local authorities, the site was maintained with all jobs.

"With the factory in Vénissieux, we have moved closer to our customers in France, Southern Europe and North Africa and as such we can better and more quickly respond to their requirements," explained Jürgen Pressl, member of the Bosch Solar Energy Board of Management, who is responsible for production. The lines in the new plant can be used flexibly. Five different types of mono-crystalline and multi-crystalline Bosch solar modules can be built. "Even when developing the factory in Vénissieux, it became clear that this was an experienced Bosch plant from the automotive industry."

The project was originally announced last May, when the company cryptically revealed it would invest "a low eight-figure amount in this new facility." At its Vénissieux location, the Bosch Group manufactures diesel pumps for the automotive industry and, in an adjacent plant, hydraulics components for mobile machinery, especially construction machinery. With photovoltaics production now being added, the two plants are to be merged to form one organizational unit, with one plant manager. Altogether, the Bosch Group currently employs some 1,200 associates in Vénissieux.

The solar irradiance is very good in Malaysia too, where Bosch Solar on Feb. 29 signed a land purchase contract for a planned photovoltaics manufacturing facility in Penang.

"The new site in Penang is part of our strategic expansion in this field of business. This land purchase marks a new milestone in this development," said Martin Hayes, the president and managing director of Robert Bosch South-East Asia.

However, construction for the new manufacturing site will not start in early 2012 as originally planned. The delay is due to ongoing work to make cells with significantly higher efficiency ready for series production. The necessary steps to do so have not been completed. "We want to use state-of-the-art technology in Malaysia. Developing this will take a little longer, and we plan to take that time," said Lars-Oliver Stock, the director of Bosch Solar Energy Malaysia.

With a total expenditure of some €520 million (US$693 million), Bosch is planning to build a fully integrated plant for crystalline photovoltaics. Activities will range from the manufacture of monocrystalline ingots, to wafers and cells, to the production of ready-to-fit solar modules. The site in the Penang region is a response to developments in the Asian market, which is set to grow 30 percent in the coming years, says Bosch.

The new site, originally announced in June 2011, is in the Batu Kawan region in Penang. The company said last year that upon completion, some 2,000 associates will be working at the new site in Penang, producing solar power plants with a total output of 640 megawatts peak each year. The module production lines will reach an annual capacity of 150 megawatts peak.

The megawatt peak (MWp) unit is commonly used in the solar energy industry to indicate the power rating, and thus the best possible output, of a solar cell. In practice, current efficiency depends strongly on where in the world the cell is in use. While the annual cell production of the new manufacturing site in Malaysia would cover the energy needs of 165,000 households in central Europe, the number of households covered in Malaysia would be almost twice as high, at up to 300,000.

Bosch says the level of solar radiation in countries located between the 35th parallels of the northern and southern hemispheres is twice as high in Southeast Asia as in Germany. In addition, the decision to build a new site in Asia reflects general developments in the global market for photovoltaics. By 2020, total installed output in the region is expected to reach some 130 gigawatts peak. This would be enough to meet the energy needs of 200 million people in Europe. There are currently five gigawatts installed.

Bosch has been present in Malaysia since 1923. "The company is already quite familiar with the favorable conditions offered in Penang. With a work force of 1,100 associates, Bosch Power Tools manufactures cordless drill/drivers, drills and measuring instruments there. The Car Multimedia division, with 600 employees, manufactures car radios and navigation devices there. In 2010, Bosch generated sales of €130 million (US$173 million) in Malaysia, and counted 2,300 associates in the country.

Thriving in Thuringia, Despite Obstacles

In Germany, which is currently Bosch Solar Energy AG's main market, total newly installed output is expected to remain constant at around 3.5 gigawatts per year. "This is assuming that the political framework is reliable, that companies and customers have the planning security they need, and that the demand situation stabilizes once again," said Holger von Hebel, the president of the Solar Energy division, last year, before the German government began cutting solar subsidies.

At its home base in Germany, with an investment of more than €500 million (US$666 million) in its manufacturing facility in Arnstadt, Thuringia, Bosch has more than tripled production capacity. In addition, a new R&D center has come online, as well as a new headquarters and training center. By this year the company expected to create more than 1,000 new jobs in Arnstadt.

"From now on, the Arnstadt location will assume the function of a competence center. It is from there that Bosch will plan and manage its global photovoltaics activities," said Franz Fehrenbach, the chairman of the Bosch board of management, at ceremonies in July 2011.

"In building this new center for photovoltaics in Arnstadt, Bosch is investing in a technology of the future," said Christine Lieberknecht, the minister-president of the state of Thuringia.

Office premises and a manufacturing facility were built on a 4.1-million-sq.-ft. (382,000-sq.-m.) site over a two-year construction period. The new research center will be used by 120 associates to develop new products and make them ready for series production, drawing on the support of a network of some 34,000 researchers and developers within the Bosch Group. The newly built training center will be used to prepare some 150 young people for occupations as mechatronics engineers, manufacturing engineers, or process engineers. The first class began training on September 1, 2011.

A total of 620 slats furnished with thin-film solar modules are attached to the Arnstadt administration building's façade, where they generate power and provide shade. The top floor's hallway ceiling is made of semi-transparent solar elements whose built-in cells not only generate electricity but also act as a source of pleasant natural light. Overall, the photovoltaic arrays installed on these buildings have a combined power rating of over one megawatt. These systems will produce some 1 million kilowatt-hours of power annually, enough to cover the entire electricity needs of the offices in the headquarters building.

Before the expansion work started, Arnstadt was the site of a cell production facility belonging to ersol Solar Energy AG. Bosch took over that Erfurt-based company in the summer of 2008 and began expanding the site during the spring of 2009. Together with the adjacent facility for the production of ingots and wafers, Bosch covers all the steps in the crystalline value chain at this location, from the pulling of the silicon crystal to the finished solar module.

"Three years ago we started with just under 1,000 associates. By 2012, this figure will have quadrupled," said von Habel last July, going on to project that the division's sales would pass the €1-billion (US$1.3 billion) mark for the first time in 2011. Instead, due in part to the cutback of those German subsidies, the company reported in January 2012 that a writedown in its solar division accounted for about half of some US$1 billion in one-off costs, according to The Financial Times. And employment, though it could still increase this year, hovers at 2,000 globally.

Even with such headaches, Bosch Group as a whole still surpassed €50 billion in revenues in 2011, a first.

Among other elements contributing to the company's success in Arnstadt is its cooperative agreement with the public high school "Staatliches Gymnasium" to promote early career orientation for students. For Bosch it is the 100th educational partnership within the context of the Wissensfabrik, or "knowledge factory" system, established in 2005 by an association of German companies such as BASF and ThyssenKrupp to trigger enthusiasm for technology and business among boys and girls as early as kindergarten.

"In Germany I consider it a duty for companies in particular to promote interest in technical occupations through active interaction with children and youth," said Dr. Wolfgang Malchow, board member for human resources at Bosch. "This is the only way we can win over qualified junior staff for tomorrow and beyond." 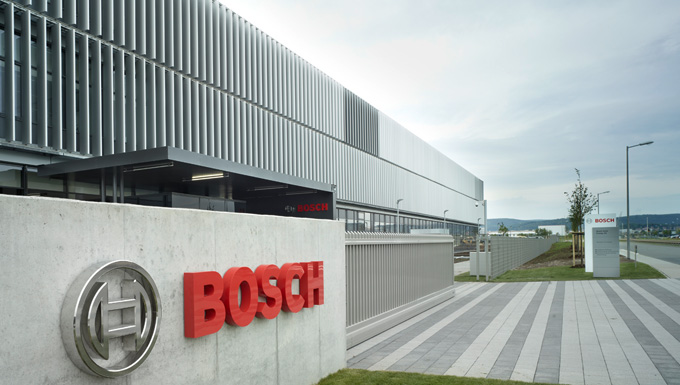 Bosch Solar hopes to create over 1,000 new jobs with a combination of investments in Arnstadt, Thuringia.