Replacing all those lighting fixtures is yielding tangible results. 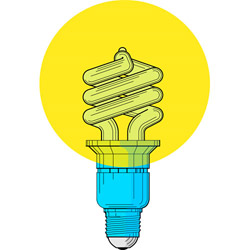 The residential sector, which accounted for 25 percent of total lighting energy consumption in 2010, remained the least energy-efficient of the sectors, primarily due to the use of incandescent lamps. Lighting efficiency is often expressed as efficacy, or the ratio of light output (measured in lumens) to the electric power input (measured in watts).

Residential lighting is expected to become more efficient as new standards mandated by law go into effect. While the new standards do not specifically prohibit any bulb type, they do limit wattages for certain lumen ranges, and conventional incandescent bulbs exceed these minimum wattage levels.

In addition to building surveys, DOE's market characterization relies on building lighting audits, industry surveys, national lamp shipment data, and interviews with lighting professionals and subject matter experts to arrive at its estimates for the national and sector-specific levels.

A related white paper from energy management and information services firm Coleman Hines clarifies some confusion with regard to the 2007 Energy Independence and Security Act (EISA), which called for a 30-percent energy efficiency increase in 100-watt light bulbs by January 2012.

"This efficiency standard will be applied to other typical wattage ratings through 2014 (i.e. 60 watts), but does not affect decorative, appliance, flood, three-way or other specialty bulbs," says the report. "This efficiency standard rules out the tungsten incandescent technology for standard wattage ratings. This older technology is very inefficient and up to 90 percent of the energy consumed is converted to heat instead of light. Even so, the lighting manufacturers can deliver the energy efficiency with any technology they choose, but it must meet the performance requirements of the Act. Currently, dimmable 72-watt halogen incandescent bulbs which meet the criteria of EISA are ready for purchase at your local retailer."

Since the new standard has gone into effect, says the firm, "the import and manufacture of the familiar 100-watt incandescent lamp has ceased. However, many of our clients are installing new lamping technologies, such as LEDs, and are benefiting from up to 90-percent reductions in lighting energy usage as a result. This reduction, when coupled with incentives, can produce a return on investment of less than a year."

Meanwhile, Congress early this year passed a spending bill that removes funding for the enforcement of the energy efficiency standard for light bulbs through Sept. 30, 2012. This means that the Energy Department will not be able to impose fines on companies that violate the law due to lack of funding for personnel.

However, says the Coleman Hines report, "larger lighting companies have been quoted in various news agencies as continuing to comply with EISA, especially after having spent large amounts of capital in new technologies and re-tooling manufacturing facilities to be in compliance. In fact, the National Electrical Manufacturers Association (NEMA) helped to craft the 2007 law based on technology that its members (Phillips, GE and others) were already perfecting."

The national standard has already been applied in California, which adopted the lighting performance of the federal law a year early, beginning Jan. 1, 2011.

According to Coleman Hines, Australia was the first country to begin mandating efficiency for light bulbs, effective in 2009. This type of standard then spread to the European Union, the United Kingdom, the Philippines, India, Argentina, Venezuela, Malaysia, New Zealand, Canada, Cuba and China.

"China has just announced that it will completely ban the import and sales of specific incandescent bulbs beginning in October 2012," said the firm. "So far, this announcement is not an efficiency standard, but a complete ban."