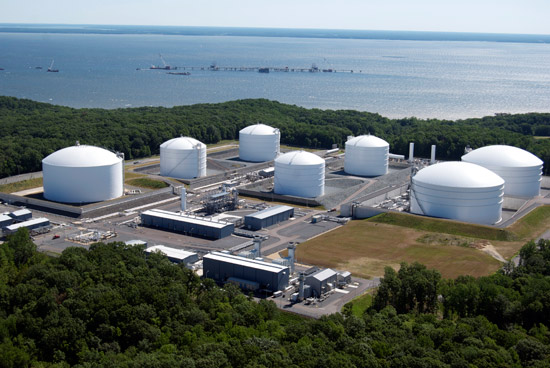 Dominion continues to move forward with its liquefaction plans at Cove Point in Lusby, Md.
Photo courtesy of Dominion
I

n April Dominion Energy said it is confident that its existing agreement with the Sierra Club and the Maryland Conservation Council permits the company to build a natural gas liquefaction plant proposed for its Cove Point facility in Lusby, Md.

"As with any project of this magnitude, we would expect some opposition from various special interest groups," said Thomas F. Farrell II, Dominion's chairman, president and CEO. "The Sierra Club, which is a party to an agreement restricting activities on portions of the Cove Point property, has previously expressed its opposition to all LNG export facilities. We have reviewed the regulations and agreements governing the site and are confident we can locate, construct and operate a liquefaction plant at Cove Point. The project can be built within the footprint of the existing facility without amending the agreement involving the Sierra Club and the Maryland Conservation Council. Dominion plans to design, build and operate the facility with minimal environmental impacts."

At the end of March, Dominion signed binding precedent agreements with two companies, one of which is Sumitomo Corp., which has significant global energy operations. Between the two shippers, the planned project capacity of about 750 million cubic feet per day on the inlet and about 4.5 million to 5 million metric tons per annum on the outlet, is fully subscribed.

Construction is expected to begin in 2014, with an in-service date in 2017, pending receipt of necessary approvals, negotiating binding terminal service agreements with the shippers and successful completion of engineering studies.

Economic studies filed with Dominion's federal approval applications anticipate a number of significant benefits from the project, including:

The natural gas exports would lower the U.S. trade deficit by $2.8 billion to $7.1 billion annually.

A presentation Farrell delivered on May 8 stated that the liquefaction project is "situated ideally to capture Appalachian production for export." The project still requires DOE, FERC, state and local approvals. Farrell's presentation stated that approval has been received for export to free-trade countries. An application has been filed for export to non-free-trade countries. And the FERC prefiling process is expected later this summer.

On April 16, two other FERC rulings offered a window onto the changing liquid natural gas landscape. FERC approved a proposal by Sabine Pass Liquefaction, LLC and Sabine Pass LNG, L.P. to site, construct and operate facilities to liquefy domestic natural gas for export to markets worldwide. It's the Commission's first authorization of a project that would export liquefied natural gas (LNG) from production resources within the United States.

Sabine Pass LNG and Sabine Pass Liquefaction propose to construct and operate liquefaction and related facilities that would enable the companies to liquefy and export up to 2.2 billion cubic feet, or 16 million tons per annum (mtpa), of domestically produced natural gas. The project would be sited at Sabine Pass' existing LNG terminal located in Cameron Parish, La.

The liquefaction project would be built in two stages, each consisting of two LNG process trains with a liquefaction capacity of an estimated 4.0 mtpa. The project will involve the permanent use of an additional 191 acres (77 hectares) within the existing Sabine Pass LNG terminal and will use five existing LNG storage tanks at the site.

The Commission ordered Sabine Pass LNG and Sabine Pass Liquefaction to complete construction and have the proposed facilities available for service within five years of the date of the order.

Meanwhile, remember all those LNG import terminals on the U.S. docket about a decade ago? One by one they're changing their tunes.

On that same day in April, FERC "vacated, without prejudice, an order authorizing Jordan Cove Energy Project, L.P. to site, construct and operate a liquefied natural gas (LNG) import terminal in Coos County, Oregon, and the related Pacific Connector pipeline from the terminal to a point near the Oregon/California border."

Jordan Cove had notified FERC on Feb. 29, 2012, that due to current market conditions it no longer intends to implement FERC's Dec. 17, 2009, authorization to construct and operate an import terminal.

In the same February filing, Jordan Cove sought pre-filing status to explore the feasibility of a liquefaction export project that would be built and operated at the same site. FERC granted that status.