Land owned by the U.S. military could be
ideal for solar energy bombardment. 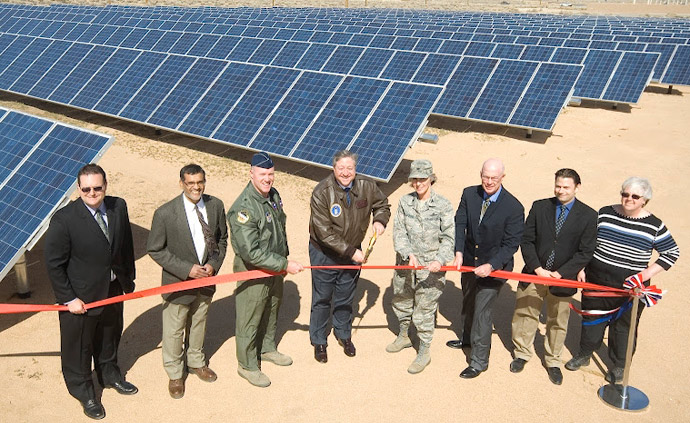 Borrego Solar recently completed a 3.4-MW solar power installation at Edwards Air Force Base in Southern California. Comprising three ground-mounted, single-axis tracking solar farms, the system was built and is owned by Borrego, which will sell power to the military base under the terms of an in-house, 10-year power purchase agreement (PPA).
Photo courtesy of Borrego
by DEAN BARBER
T 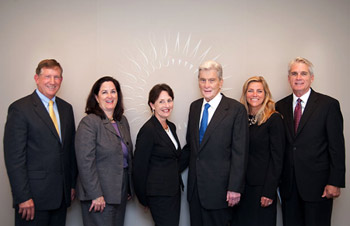 o industry observers and participants alike, it is becoming increasingly clear that the U.S. military is taking an aggressive role in turning to renewable energy sources for a variety of reasons. And that bodes well for the solar industry.

A recent 500-plus page report underlies a growing belief within the Department of Defense (DoD) that solar energy will not only reduce demand for traditional energy, with its highly fluctuating prices, but also play a critical role in national security.

Indeed, the congressionally directed study by ICF International underscores what is already happening on the ground and what the solar industry sees as a measure of confirmation and credibility — that large contracts are being awarded by the Army, Navy and Air Force to private developers for solar energy projects.

The ICF report said DoD could generate 7,000 megawatts (MW) of solar energy — equivalent to the output of seven nuclear power plants — on four military bases located in the California desert.

"If this 7,000 megawatts ever got built out, which I don't think will ever happen, it could generate 30 times the energy electricity requirement of these installations," said ICF Vice President Robert Kwartin during a recent webinar.

ICF examined nine military installations — seven in California and two in Nevada — encompassing a total area of 6 million acres (more than 2.4 million hectares). It found that 96 percent of the land was unsuited for solar development, largely, although not exclusively, because of the military operations taking place within the installations.

"They (the military) have this land, but they use it intensively," Kwartin said. "So solar has to fit in where it will not conflict with the mission of the installations."

The Naval Air Weapons Station China Lake in California is a prime example. The base covers about 1 million acres, but less than 7,000 acres are economically viable for solar generated power, according to the ICF study.

"On one hand, there is a lot of area that is not going to be accessible to solar. On the other hand, there is enough area remaining to accommodate 1,000 megawatts on the ground, which is an awful lot of solar potential," Kwartin said.

Kwartin said the only way to mobilize the solar potential in a cost-effective way is for the DoD to partner with private developers. The DoD has more flexibility than other federal agencies to enter into long-term contracts with companies that will build, own, and operate the fixed-ground solar farms. By terms of the contracts, DoD purchases the electricity generated by the solar facility and companies pay DoD a lease rate for use of the land.

A new rule allows DoD to enter into long-term power purchase agreements for up to 30 years, although the longest term contract to date has been for 20 years at China Lake. It is there where SunPower is building a 13.7-MW solar farm that will allow the Navy to buy electricity below the retail utility rate and reduce costs by an estimated $13 million over the next 20 years.


DoD clean energy investments increased 300 percent between 2006 and 2009, from $400 million to $1.2 billion, according to a recent report from The Pew Charitable Trusts. Projections for 2030 are set to eclipse $10 billion annually, with the goal of obtaining 25 percent of DoD energy from renewable sources by 2025.

The DoD, which consumes 1 percent of all the energy in the United States, spends over $4 billion annually on electricity use, accounting for more than 90 percent of the federal government's energy use. The DoD has 300,000 buildings on more than 500 installations, with 2.2 billion sq. ft. (more than 204 million sq. m.) of space.

The department has laid out $1.4 billion in its 2013 budget request to improve its energy use in combat zones, 90 percent of which will go toward energy efficiency, with the Marine Corps investing $25 million to accelerate a program to outfit battalions with solar-powered equipment. DoD is also requesting $1.1 billion in 2013 to improve energy use at its permanent bases.

On the Radar, Off the Grid

For the solar energy industry, DoD's aggressive take on renewable energy is hugely important because it provides visibility (by virtue of the fact that the projects are taking place) and a comfort level to the private sector.

SunPower is an industry leader in building solar installations on military bases. In 2007, the company built a 14.2-MW solar farm at Nellis Air Force Base in Nevada, spanning over 140 acres. It is the largest solar photovoltaic system in North America, and saves the base about $1 million a year.

In addition to the aforementioned plant at China Lake, 150 miles (241 km.) east of Los Angeles, SunPower has built a solar plant for the Air Force Academy in Colorado Springs, Colo.

SunPower is building a 13.7-MW solar farm that will allow the Navy to buy electricity below the retail utility rate and reduce costs by an estimated $13 million over the next 20 years.

Dan Bedell, executive vice president of marketing and corporate development at Dallas-based Principal Solar, says military contracts for solar energy are happening for three main reasons — DoD has the land; private developers can get financing to build solar farms because of long-term power pay agreements; and the military wants to get bases off the public electricity grid for purposes of national security.

It is that latter point, for strategic reasons because of the economics, which may be driving the trend. In 2011, the Center for Naval Analysis' Military Advisory Board called for "immediate, swift and aggressive action" to reduce U.S. oil consumption 30 percent in the next 10 years, stating that U.S. dependence on oil constitutes a significant threat to the country's economy, global leadership position, environment and military.

Rick Stansley, director of strategic development with the University of Toledo says the school has a number of research agreements with the Air Force.

"We're pursuing projects with respect to deployment nationally and internationally," he said in an interview with Site Selection earlier this spring. "There is so much happening right now — we're just on the cusp. We see this as a national security issue. The capability to move bases off the grid exists today. There are loads of opportunities. It takes a commitment to planning, and a commitment by the community that they're going to do something different."

Essentially, U.S. military bases face the same issues as the public: aging infrastructure and grids that are susceptible to terrorist attacks and natural disasters, Bedell says.

"They have a stated desire to make many if not all of their bases energy islands," he says. "They are well aware of the fact that they are connected to the public grid and how the problems with the public grid impact them. They recognize that from a national security perspective, and they are going to do something about it."