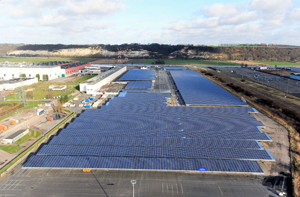 arly this month Renault inaugurated 40 hectares (99 acres) of photovoltaic panels simultaneously at six of its French production sites. Altogether, the 60 soccer pitches’ worth of solar panels at sites in Douai, Maubeuge, Flins, Batilly, Sandouville and Cléon comprise what the company calls the world’s largest PV system within the automotive industry, with a capacity of 59 MW. Located over delivery and shipping centers and parking areas, the initiative “is also an innovative way of protecting new vehicles before delivery to the sales network because it limits storm damage,” said the company.

The project was developed by Renault, project initiator and coordinator, in its role as lessor, together with its partners Gestamp Solar and Coruscant (Cléon only), in their role as operational project managers. Renault also plans to set up nearly 100,000 sq. m. (sq. ft.) of PV panels at the Valladolid and Palencia plants through an agreement with Cenit Solar, while feasibility studies are underway in Slovenia, Morocco, Brazil, Colombia, Chile and Romania. Further projects are being introduced at the Busan site in South Korea, with 300,000 square meters scheduled for finalization in December 2012.

Looking for the ultimate resource for state incentives supporting alternative fuel development and use? This is the place.

Natural gas exploration and production has ramped up everywhere. But some of those places are at borderlines with histories as combustible as their resources. NPR looks at one such location in Cyprus.

Ameren Transmission Company of Illinois, a wholly owned subsidiary of Ameren Corp., on Nov. 19 announced it had received important regulatory approval from the Federal Energy Regulatory Commission to continue to move its Spoon River and Mark Twain transmission construction projects forward. FERC approved similar regulatory treatment for the Illinois Rivers transmission project in May 2011. The three projects are part of the $1.3-billion in multi-value projects approved by the Midwest Independent Transmission System Operator Inc. (MISO) board in December 2011. MISO is a regional transmission organization serving an 11-state region, including the service territories of the Ameren utilities, and the Canadian province of Manitoba.

“We are very pleased with FERC’s approvals of the incentive regulatory treatment,” said Maureen Borkowski, president and CEO of ATXI. “This approval paves the way for important new investment by Ameren Transmission Company of Illinois to deliver renewable energy in the Midwest, promote electric power reliability, lower costs for consumers by reducing transmission congestion and create jobs which are important to the economy.”

The Mark Twain project in Missouri, preliminarily estimated to cost $155 million, will span approximately 90 miles in Missouri of new 345-kilovolt transmission line from the Iowa border to Adair, Mo., on to Palmyra, Mo.

The Illinois Rivers project, preliminarily estimated to cost $1 billion, will span approximately 400 miles with a new 345-kilovolt transmission line, crossing the Mississippi River near Quincy, Ill., continuing east across Illinois to the Indiana border. ATXI has filed a petition with the Illinois Commerce Commission (ICC) for a certificate to build the Illinois Rivers project. ATXI expects the ICC to issue a decision by mid-2013.

The City of Victorville, Calif., reached a settlement with Carter & Burgess after the end of a closed session meeting on November 9, 2012, and will collect $54 million that will cover virtually all damages incurred from the failed Foxborough Cogeneration Power Plant in which Carter and Burgess acted as the design engineer, owner's engineer and construction manager. Carter & Burgess appealed the decision, but ultimately made several offers to the City and settled the matter. The total unanimous trial verdict award in 2010 of $52 million included a first time Breach of Fiduciary Duty verdict against a California engineering firm. Gibbs, Giden, Locher, Turner & Senet LLP led the effort for the City of Victorville. “The GGLTS litigation team was aggressive in their litigation approach,” said a press release from the law firm, “and for the first time in California history were able to establish and prove an engineer acted in the capacity as a fiduciary to an owner.”

On the same day it filed for bankruptcy, Oct. 16, battery maker A123 Systems received a nearly $1-million payment as part of a $249-million clean energy grant from the U.S. Energy Dept. Read the Reuters story for all the details. U.S. Sen. John Thune and others also continue to seek more information about the company’s foreign investors. 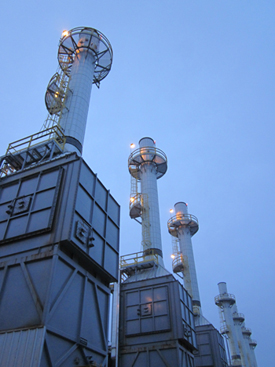 The Northern Alberta Institute for Technology this month announced a $1.2-million commitment from Cenovus Energy in support of the NAIT Cenovus Centre for Power Engineering Technology. “This relationship directly addresses an issue that affects our entire province: a looming and critical shortage of the skilled labour required by the industries that are the engine of our provincial economy,” said Dr. Forrest Tittle, dean of the School of Sustainable Building and Environmental Management. “That shortage includes the power engineers who ensure that Alberta’s energy needs are met on a daily basis.”

NAIT this year has increased the intake quota for the Power Engineering program by 50 per cent – from 60 to 90 students. Next year, NAIT will offer access to a state-of-the-art power engineering computer simulation lab.

“The oil and gas industry will face a skilled labour shortage in the coming decade and this center will play an important role in meeting our long-term workforce requirements,” said John Brannan, Cenovus executive vice president and COO.

A comprehensive report by the Washington Post on Nov. 14 highlights how shale gas is driving industrial development across the U.S., including in Ascension Parish, La.; Iowa; and Pennsylvania.

A Nov. 7 note from Nashville-based national law firm Baker Donelson calls attention to the fact that the state attorney general has issued an opinion “which concludes that the statutory authority for valuing certain machinery and equipment” — i.e. equipment used to produce power in a certified green energy production facility — “is of doubtful constitutionality.”

Financial Times notes that the winner of the Financial Times and Goldman Sachs Business Book of the Year Award was New Yorker staff writer Steve Coll’s “Private Empire: ExxonMobil and American Power.” Among the judges was the leader of an ExxonMobil competitor. Jorma Ollila, chairman of Royal Dutch Shell, one of ExxonMobil’s rivals, said the book “told the reader how, in the 21st century, you manage a truly global company and the relationship between business and society,” reported the FT. 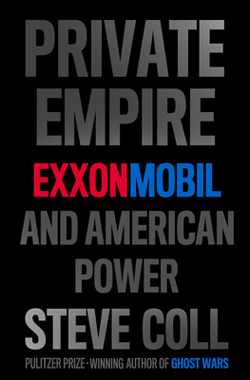