Where to Fill ‘Er Up

California is the leader in alternative fuel styles. 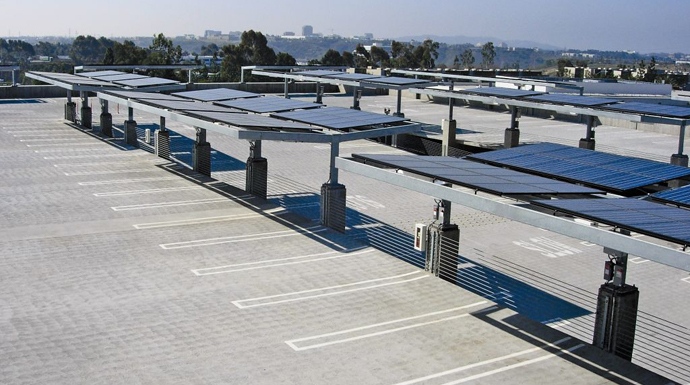 Qualcomm’s San Diego campus not only offers employees electric charging stations, but solar canopies to both power and shade them.
Photo courtesy of Qualcomm
by ADAM BRUNS
W 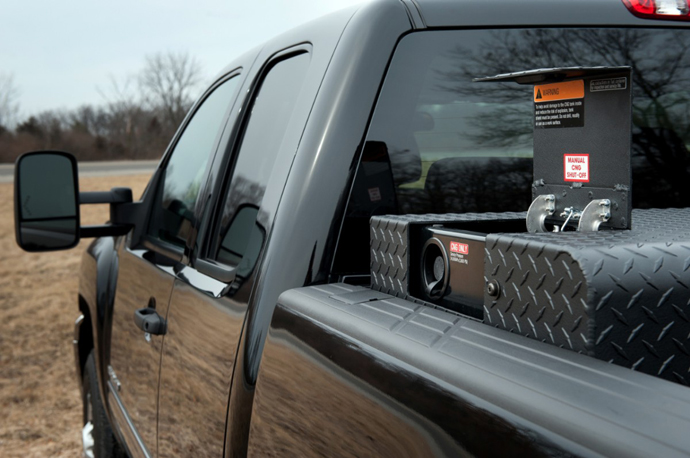 here’s a biodiesel pump when you really need one? And what good’s an electric vehicle if you can’t find a place to plug in?

If you’re looking for updates on such matters for decisions involving your corporate fleet or your family’s, the place to turn is the mapping function provided by the Alternative Fuels Data Center, maintained by the Energy Efficiency and Renewable Energy arm of the U.S. Dept. of Energy. As of this month, there are more than 13,800 alternative fuel stations in the United States, ranging across the following fuel types:

Some data crunching at the crossroads of population, geography, power infrastructure (both electrical and political) and crop proximity produces the following Top 10 List:

What are the per capita rankings, you ask?

Proprietors include car dealerships, gas stations, shopping centers and retail/restaurant locations, from the Zen Dog Café in Rhinebeck, N.Y., to the Dairy Queen in Monmouth, Ore. Major utilities such as National Grid, NV Energy and Entergy have multiple stations in operation, as do organizations such as Adobe, NASA, GM and Facebook, whether for private fleets or employee vehicles.

A full 6,460 of the stations — nearly 47 percent of the total — are EV charging locations. Some experts predict as many as 974,000 charging points will be installed in the U.S. by 2015. Arizona has 192 such ports. Florida has 419. Massachusetts has 171, New York 225, Oregon 315 and Texas 481. And Tennessee has 297, thanks in large part to heavy participation by the Cracker Barrel restaurant chain and Nissan dealerships — Nissan makes its all-electric Leaf vehicle at its plants in the state.

They all pale once again in comparison to California, with 1,346. But some are looking beyond charging stations to a solution that mirrors our daily lives in 2012, i.e. always plugged in.

In May, Siemens announce its “eHighway of the Future” concept at the 26th Annual Electric Vehicle Symposium in Los Angeles. The eHighway concept is the electrification of trucks and select highway lanes via overhead electrified wires similar to how modern day trolleys or streetcars are powered on many city streets.

“When most people think of vehicle emissions, they assume cars do most of the damage, but it's actually commercial trucks that are largely to blame,” said Daryl Dulaney, CEO, Siemens Infrastructure & Cities, United States. “Freight transportation on U.S. roadways is expected to double by 2050, while global oil resources continue to deplete. And by 2030, carbon dioxide emissions are forecasted to jump 30 percent due to freight transport alone.”

Of course, Siemens technology is at the system’s heart, complimenting its hybrid drive systems for vehicles. All you need is a hybrid diesel electric truck with all the right connections and software. Currently being tested in Germany, pilot projects are planned for the ports of Los Angeles and Long Beach to connect to cargo centers. The technology also can also be expanded to allow trucks to travel through densely populated cities.

“The trucks are designed to use both electricity and diesel power and will automatically switch to electric mode when they detect and attach to the overhead lines,” said Siemens in May. “Once the truck leaves the lines, it switches back to diesel. As the technology becomes more widely adopted, the company believes every truck equipped with an electric drive system will be able to use the eHighway regardless if it's a diesel electric, pure battery, fuel cell range extended or CNG combustion engine vehicle.”

Hydrogen and CNG Move Up the Value Chain

Whither fuel cells? The Dept. of Energy’s list of stations only tallies 58 places to fuel up with hydrogen in the entire U.S. Germany is leading the way where hydrogen fuel cell-powered vehicles are concerned, having signed in June an agreement with The Linde Group to expand the nation’s network of public hydrogen filling stations to at least 50 by 2015. The German federal government and industry combined are investing close to $45 million to expand the country’s hydrogen infrastructure.

As for CNG, U.S. deployment continues, and its take-up continues to work its way back up the supply chain. Early this year, after already attaining the milestone of 5,000 alternative-fuel vehicles in use in January, AT&T announced it would take delivery of 1,200 Chevrolet Express CNG-powered cargo vans to be spread across service centers nationwide. It was the largest-ever order of CNG vehicles from General Motors. Through 2018, AT&T plans to invest up to $565 million to deploy 15,000 alternative fuel vehicles.

Indiana happens to finish just out of the Top 10 in alternative fuel stations per capita, with 442 stations for a populace of just over 6.5 million. There are only 16 CNG stations in the whole state. But that doesn’t mean it’s not benefiting from industrial activity related to CNG.

Earlier this month, GM announced that production was under way at its plant in Fort Wayne, Ind., for the 2013 Chevrolet Silverado HD and GMC Sierra 2500 HD bi-fuel pickup trucks, which run on gasoline or CNG. According to GM, the CNG and gasoline tanks have a combined range of 650 miles, the longest standard bi-fuel range of any original equipment automaker.

The bi-fuel option is priced at $11,000 above the suggested retail price of the base vehicle. The bi-fuel pickups are ordered from the factory, sent to the Tier One supplier IMPCO for installation of the CNG bi-fuel delivery and storage system and then delivered by GM transportation to the dealer or to an upfitter for customer-ordered modifications.

It may come as no surprise that one of the chief companies involved in the nation’s natural gas exploration and production boom is looking to use some of that product itself.

“At Chesapeake, we are converting our fleet of more than 5,000 vehicles to run on natural gas, and having options from GMC and Chevy is critical to help us reach our conversion goal,” said Nate Pumphrey, Chesapeake Energy Corp. director of fleet operations. “Following our full conversion, we will save $11 million to $12 million annually on fuel costs. As a fleet manager, the stable price of natural gas is another major benefit that helps me budget more accurately, and the fuel's reduced emissions align with Chesapeake's commitment to environmental excellence.”

Siemens officials and Rich Macias, director of transportation for the Southern California Association of Governments, talking about why the idea of an e-highway is more urgent than futuristic.
Film courtesy of Siemens