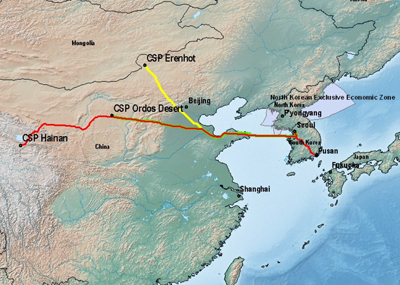 DESERTEC’s vision for an “Asian Super Grid.”
Image courtesy of the DESERTEC Foundation

iemens just announced it’s dropping out of the visionary DESERTEC initiative, which envisions installation of huge solar power assets in Mediterranean Europe, the Middle East and North Africa. But that’s because Siemens is getting out of solar, not because of anything wrong with the DESERTEC plan, which is still moving forward. In the meantime, The DESERTEC Foundation and the Japan Renewable Energy Foundation (JREF) are working together towards a high-voltage direct-current super grid to supply the whole of Asia with renewable energy. On Oct. 24, Japanese Softbank Corp., led by billionaire and JREF founder Masayoshi Son, took the first step in the implementation of the “Asian Super Grid.” By the end of the year, SB Energy Corp., the renewable energy division of Softbank, will identify the site for a wind farm in the Gobi Desert in cooperation with the Mongolian company Newcom LLC. This first wind farm of up to 300 MW could become operational as early as 2014, says DESERTEC. Feasibility studies for three more sites in Mongolian parts of the Gobi are planned. Taken together they could result in desert wind farms with a total capacity of 7,000 MW.

Reuters and other sources report that Iraq has extended invitations to some 25 companies to submit proposals for up to $1.6 billion worth of solar and wind power projects in the next three years, adding 400 MW to a grid in need of more power. The reports cite the Iraq Ministry of Electricity, which Reuters says has plans to grow overall power generation from 8,800 MW to 22 gigawatts by 2016. This article from Middle East business publication MEED fills in the details.

If you haven’t yet consulted the 2012 Uptime Institute Data Center Industry Survey results, now is a good time to do so.

On Monday, Oct. 29, MacLean Power Systems, a maker of hardware, connectors, insulators, anchoring systems and a variety of protection devices for electric utilities, announced it would invest $12 million and create 250 jobs at a new manufacturing plant in Trenton, Tenn., located in Gibson County just north of Jackson and east of Dyersburg on the western end of the state. The facility should be operational sometime in the first half of 2013. “The tireless efforts of the City of Trenton, the Industrial Board, Trenton Light and Water, and the State of Tennessee were major factors in our decision to locate here,” said Barry L. MacLean, president and CEO of parent firm MacLean-Fogg Co. MacLean-Fogg, an Illinois-based company that got its start in 1925 thanks to a single lock nut produced for railroads, operates 27 global manufacturing facilities with annual sales of $900 million and a worldwide work force of more than 3,000. Fifteen of those facilities are operated by MacLean Power Systems. Others produce engineered metal and plastic components for the industrial, automotive, military and aerospace markets.

The latest projects to land in Houston include yet another complex in the western part of the metro area announced this month by Transwestern, which has acquired 30 acres in Mason Creek Corporate Center for a five-building, 384,900-sq.-ft. (35,757-sq.-m.) spec industrial project (rendering below). Mason Creek is a 110-acre (44-hectare) master-planned land development being executed by Parkside Capital, LLC. “The I-10 west corridor has historically been the strongest path of growth in the Houston region, but there is a lack of high quality, modern industrial space,” said Pete Johnston, Transwestern’s senior vice president of development services. “The completion of major improvements to I-10 coupled with continued westward economic activity makes this a compelling business plan.”

Elsewhere in town, DHL has opened an Energy Center (below right) to showcase what it offers energy companies in the region. “With more than 300 companies active in the field of oil and gas in Houston, we are strategically based at one of the principal hotspots for energy business,” said Steve Harley, Sector President Energy at DHL Customer Solutions & Innovation. “We are therefore convinced that the Energy Center will provide a comprehensive picture of both proven solutions and innovative research for energy supply chains.”

Images courtesy of Transwestern and DHL

Think you and your company are on the right path where energy and sustainability are concerned? Check in with David Owen’s book “The Conundrum: How Scientific Innovation, Increased Efficiency, and Good Intentions Can Make Our Energy and Climate Problems Worse” and prepare to think again.

The U.S. has long decried artificial industry subsidies abroad. But a new Cato Institute report, “Countervailing Calamity: How to Stop the Global Subsidies Race,” recommends a long hard look in the mirror, especially where energy-industry props are concerned.

Then again, argues journalist and historian Catherine Tumber in the new book “Small, Gritty and Green” from MIT Press, a bunch of mid-sized American cities are poised for rejuvenation by clean energy, due at least in part to various government and free-market stimuli. 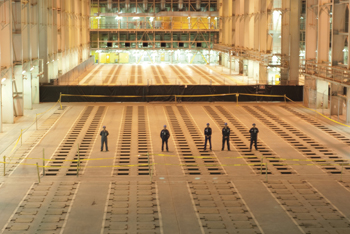 Early this month, a six-month spending measure was signed by the President that contains funding for continued work on the American Centrifuge research, development and demonstration (RD&D) program, part of the government’s $280-million share of the $350 million cost-share program with USEC Inc., whose uranium enrichment technology program we first profiled in early 2004. As of July 31, USEC had built and conditioned with uranium gas approximately 50 AC100 machines for the demonstration cascade. USEC expects to complete and operate a 120-machine cascade in a commercial plant configuration in 2013. The program is projected to support approximately 1,200 jobs in Ohio, Tennessee and other states.