Alcoa and many others will benefit from Brazil’s newest power plant.

Estreito Hydroelectric Power Station cost more than $2.4 billion to construct, and supplies enough power for a city of 4 million people, says the consortium that built it.
Photo courtesy of Alcoa Inc.
by ADAM BRUNS
A

nation that already gets 80 percent of its power from hydroelectric plants last week added another 1,087 megawatts — enough, say its builders, to supply the needs of a city of 4 million.

The new power is coming from the Estreito Hydroelectric Power plant, located on 1,300 hectares (3,212 acres) on the Tocantins River along the border between the states of Tocantins and Maranhão in northeast Brazil. The facility comes from the Estreito Power Consortium, comprising GDF SUEZ subsidiary Tractebel Energia (40.07 percent), Vale (30 percent), Alcoa (25.49 percent) and Camargo Corrêa Energia S.A (4.44 percent).

Alcoa’s share of the installed power is earmarked for the company's Alumar facility. With the Estreito facility, Alcoa will be 70 percent energy self-sufficient in Brazil. The company has shareholdings in three other hydroelectric power stations: Machadinho and Barra Grande on the border of the states of Santa Catarina and Rio Grande do Sul; and Serra do Facão in Goiás. Machadinho (1,140 MW) has been running since 2002, and Barra Grande (708 MW) began operating in 2005.

In 2011 Alcoa recorded revenues of US$2 billion in Brazil. An updated total investment in the Estreito project from a Tractebel news released pegged the project’s price tag at more than $2.4 billion. The Estreito plant is part of the Brazilian Government’s Program for the Acceleration of Growth (PAC), and therefore benefited from favorable finance conditions, with debt financing through 24-year loan agreements provided by the Brazilian Development Bank (BNDES) and a group of Brazilian banks.

“Estreito enhances our position as the leading private sector company in energy generation in Brazil as well as our commitment to produce power from renewable resources,” said Manoel Zaroni Torres, Tractebel Energia's CEO, at a ceremony attended by Brazilian President Dilma Rousseff.

“Our investment in the Estreito power plant is an important part of our strategy for seeking competitiveness for our operations in Brazil, since energy is a fundamental input in the aluminum industry,” said Franklin L. Feder, regional CEO of Alcoa Latin America & Caribbean.

Construction of the facility began in 2007, and at the height of construction, the development generated some 36,000 direct and indirect jobs.

"The five years were full of challenges on this huge project, which in addition to supplying power for the whole of Brazil and for Alcoa's plants for the next few decades, will stimulate regional development," said Ricardo Sayão, director of energy for Alcoa Latin America & Caribbean.

The project’s impact has touched 12 municipalities (two in Maranhão and 10 in Tocantins), as its reservoir occupies an area of 400 sq. km. (154 sq. miles). According to a presentation from the consortium (CESTE), the plant could be just the beginning of a series of potential hydro sites along the Tocantins River all the way up to Brasilia.

Among the revamped infrastructure accompanying the dam and power plant have been 17,877 km. (11,110 miles) of transmission lines in both Maranhão and Tocantins, and numerous road and bridge configurations, in addition to the new Imperatriz 500-kV line, the sum total investment coming to more than $179 million.

In addition to future power capacity, the project already has contributed the equivalent of $285 million in taxes during the construction phase, and will continue to pay more than $95 million annually in taxes to municipalities, the two states and the federal government. Among other benefits of the project, said the consortium’s presentation:

The investment has included more than $119 million spent on environmental monitoring and remediation, and another $228 million spent on socio-environmental programs that include relocation of people and businesses; “Development of Local Production Activities, Harnessing the Reservoir for Multiple Uses and Identification of New Investment Opportunities;” restoration of areas for tourism and leisure; and support for family subsistence production, native fruit gathering and indigenous and migrant populations.

As of last September, the project had held 53 public meetings and 2,355 home meetings to present its resettlement plan, which involves a range of urban and rural resettlement of the population, often to improved living conditions. Along the way, CESTE has invested more than $63 million through social responsibility agreements with the 12 municipalities, contributing toward such projects as new community centers and clinics; sewage collection and treatment; libraries, fire and police departments; and youth health screenings (30,000 children); and eye and dental care. According to a release from Tractebel, a total of 39 social and environmental programs were implemented.

“The area occupied by the reservoir is the result of the acquisition of more than 3,000 properties — 98 percent of them the result of amicable agreements — with the resettlement of about 2,000 families among owners and renters,” said Tractebel. “Some of this population today lives in seven resettlement clusters built by the Consortium. The care taken with sustainability has been certified by Bureau Veritas, a well known institute which verifies compliance with international socio-environmental standards through annual certification.”

Docks On the Docket

For the business community, CESTE has partnered with the National Service for Industrial Training (SENAI) to train more than 4,000 individuals in order to develop qualified labor for its own and other projects across the region. Another partnership trained 900 in the cutting, sewing and silk screening trades for the apparel industry. More specifically, industrial development activities have included facilities for handling and commercialization of honey, coconut and cookies made with “semi-arid land fruits,” as well as an expanded FrutaSã fruit pulp factory in Carolina. CESTE has also built seven artificial beaches along the reservoir’s edge, and even hosted a “CESTE Summer” event complete with educational efforts about developing beach culture and businesses, and “distribution of sunblock and condoms to bathers.”

CESTE also is implementing a $2.3-million “Integrated Complex for Fish Delivery, Processing and Commercialization” based on seven fishermen's colonies in the region. This project is the fruit of an agreement with the Ministry of Fisheries and Aquaculture (MPA), the Brazilian Institute of Environment and Renewable Natural Resources (IBAMA) and the fishermen's colonies.

GDF SUEZ sold its 256-MW stake of guaranteed energy output in the Estreito plant at the Brazilian power auctions on 26 October 2007, in the form of 30-year term Power Purchase Agreements with distribution companies, starting from 2012. GDF Suez is studying several greenfield hydropower projects in Brazil, which will participate in future concession auctions, such as the São Manoel hydro power plant and the Tapajos river basin project.

GDF SUEZ is the leading private power producer in Brazil with over 8,000 MW of installed capacity and nearly 4,000 MW in construction. Through the project company Energia Sustentavel do Brasil (ESBR), the Group is building the 3,750-MW (50 units of 75 MW each) Jirau hydro project on the Madeira river in Brazil, one of the largest infrastructure projects under construction in the country.

Tractebel Energia is the largest private-sector power generator in Brazil. Its generating complex has a proprietary installed capacity of 6,908 MW, equivalent to about 7 percent of the installed capacity in Brazil. It is made up of 22 plants operated by the Company, of which nine are hydroelectric, six, thermoelectric and seven, fired from complementary sources – two biomass, two wind power and three Small Hydroelectric Plants (SHPs).

According to the Brazilian federal government, “more than 86 percent of energy generated in Brazil is from renewable sources (80 percent hydro and 6 percent biomass and wind). Worldwide, the average share of hydro-power totals 16 percent. Investments in this area are continuous. The hydro-power potential of the Amazon, in the North of the country, will be harnessed through the construction of large-scale hydroelectric power plants, such as Jirau (expected to commence operations in the second half of 2012) and Belo Monte (planned to generate 11,233 MW at peak).”

Government estimates say the Brazilian economy will grow 5 percent per year between 2010 and 2020, “which will require significant investment in energy infrastructure.” 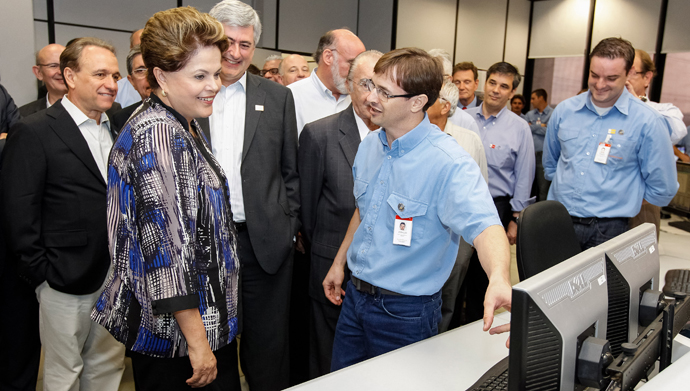 Dilma Rousseff, president of Brazil, accompanied by corporate and government dignitaries, celebrates the inauguration of the Estreito project last week.
Photo courtesy of the Federal Government of Brazil