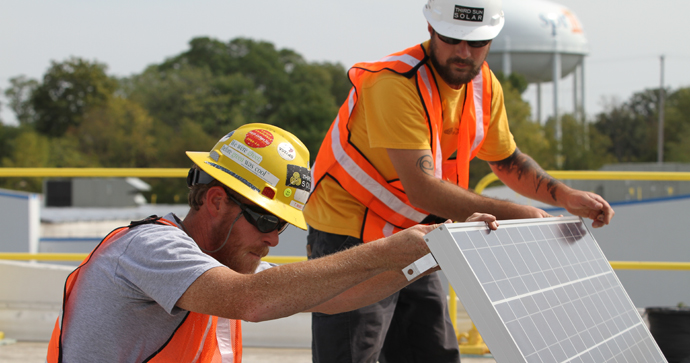 Third Sun Solar, the Athens, Ohio-based installer of Assurant’s new 6,200-panel installation in Springfield, has custom designed and installed over 300 solar energy systems for commercial, institutional, government, and residential customers across the Midwest.
Photos courtesy of Assurant
by ADAM BRUNS
I 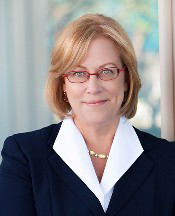 f you’ve just launched the nation's first specialized, bundled insurance program for commercial-scale solar installations, it only makes sense to try it out yourself.

And what better location to pick for alternative energy innovation than a facility not far from the invention hub of Dayton, Ohio, and just north of one of the ultimate in alternative schools, Antioch College?

Assurant Specialty Property in September announced that construction had begun on a US$7-million solar installation at its office campus in Springfield, Ohio, where the company employs 1,900.

Crews will install more than 6,200 solar panels on the roof at Assurant's campus and atop 15 new solar carports. Once completed, the 1.76-MW project is planned to produce more than 1.9 million kilowatt-hours of solar power each year — making it the Springfield-Dayton area's largest solar installation.

Construction is being performed by Third Sun Solar, a leading solar energy installer based in Athens, Ohio. Under a 20-year power purchase agreement, Assurant will purchase energy generated by the array, at a discount to retail rates. The system's performance will be monitored and managed using Tangent AMP, a proprietary technology platform that “dynamically balances the interaction between on-site generation resources, facility energy systems and the power grid to enhance customers' energy economics.”

The project is owned by Laurel Capital Partners with funding provided by First Niagara Bank. Tangent Energy will operate the array. The rooftop panels being used are manufactured by Hanwha, while the parking canopy panels come from Motech. The local utility is Ohio Edison, part of FirstEnergy.

“By generating much of the electricity we use, this project will help control our electric costs for years to come,” said Ray Rafferty, vice president for Assurant Specialty Property's Springfield Service Center.

It’s the company’s first foray into solar power, and a great way to showcase its own insurance product, which was launched in May: “Assurant is growing our expertise in solar energy, both as an insurer and an end user,” Rafferty said in September.

“We were seeking a way to learn about the solar industry from the standpoint of being a customer,” says Jeanne Schwartz, the vice president of new venture commercialization for Assurant who is leading the market launch of the company’s solar project insurance. “There is no better way to learn than to get in there and do it ourselves.”

Schwartz, based in Kansas City, Mo., says the company cast a wide net, asking close to 100 developers to weigh in on Assurant doing solar. Assurant has a total portfolio of 94 properties, seven of which it owns.

“We sent them a list of our properties,” she explains, “and asked them to give us options on purchasing or PPA [power purchase agreement, or third-party ownership]. And we asked them to make recommendations on sites that would be appropriate to do solar. We went into it with a very open mind. If they’d said six sites were appropriate, we would have considered all six. As it was, all the respondents clustered around Springfield; Rapid City, S.D.; and a call center in South Carolina.”

Decision factors included type and age of roof (and therefore roof replacement projections), and whether there was adjacent land. “Also, the industry is pretty policy driven,” says Schwartz. “Developers of solar projects make more money and are drawn to states where there are incentives for solar development. Nineteen states have RPSs [renewable portfolio standards]. So activity tends to cluster in those states.”

The Assurant team included facilities professionals from Springfield and Miami, Fla., as well as a veteran renewable energy consultant, David Schroeder, who is now an Assurant employee. An advisory group included people from financial institutions, property management firms and big-box retailers who had experience in the commercial-sized solar space.

Since employees have not had covered parking before in the Springfield lot, those 15 spaces are sure to be coveted as winter draws near. Schwartz notes that the size of the project was limited in part by utility needs.

“You have to think about how big the project can be when you have to get into the utility’s different substations, and how much any particular circuit can accept. Each can only allocate X percent of its production capacity to solar installation, because they have to levelize the energy being produced. We did all the roofs, and could have done more carports, but we had reached our limit.”

Schwartz helped develop the specialty insurance coverage for the solar market while serving as vice president of Assurant’s Incubation Team before moving to her new position. The new product provides a bundle of property, liability, and single-source warranty management designed specifically for solar projects at the commercial scale, starting at 1 MW. She says it’s ideal for big-box stores, and the special-purpose entities typically established to house commercial solar porjects.

“We’re able to provide the project with one source of all the types of coverage you need at a solar installation,” she says. "Whether panel warranty issues, a squirrel or lightning, we can take care of the situation for them and get them back online quickly. People who own projects make money from the sale of electricity, and time becomes a factor when thinking about claims.” The policies extend to paying for lost income during the time an operation might be down due to lightning, for example.

Solar panels tend to come with warranties as long as 25 years. Inverters, racking and mounting systems have warranties too.

“We stand in front of the warranties on all those pieces of equipment,” says Schwartz. “You call us. Instead of having to deal with all the manufacturers involved, we’ll determine if it’s a warranty claim. We deal with the manufacturers on the back end. That is unique in the market. Combine that with property and liability, and it really takes away the pain. You don’t have to have everyone out in the field standing and pointing fingers at each other.”

“It’s a huge, growing industry,” explains Schwartz, “and lots of people rushed into it. There was more panel manufacturing than the market could sustain. The financial institutions became more concerned about the long-term financial viability of some of the manufacturers. On our own project it delayed the startup, because ownership was dealing with investor challenges, which got worked out, but it surprised us how long it took the project to get done.”

The bright side? For Assurant, such turmoil heightened the interest from financial institutions wanting backstop protection, she says, which extends to honoring warranties of manufacturers who go out of business.

“More financial institutions are requiring protections of that sort,” she says, especially with such long-term warranties involved. “They’re uncertain when they see manufacturing exiting the market, and what that would mean to a project they’re lending to. So that became more important than we had anticipated when we first began.”

The ultimate goal, says Schwartz, is to make it easier for projects to develop and to be financed, “so more projects get done and at less cost and pain than happens today.” Thus far, the company has insured 24 projects across a number of states, including Arizona, California, Hawaii and Tennessee.

Assurant’s campus in Springfield, Ohio, houses 1,900 employees, 15 of whom, on any given day, will get to park in new covered carport spots adorned with solar panels this winter.