Channels on the Rise

Inland waterways are the new highways for frac sand, petrochemicals and crude oil. 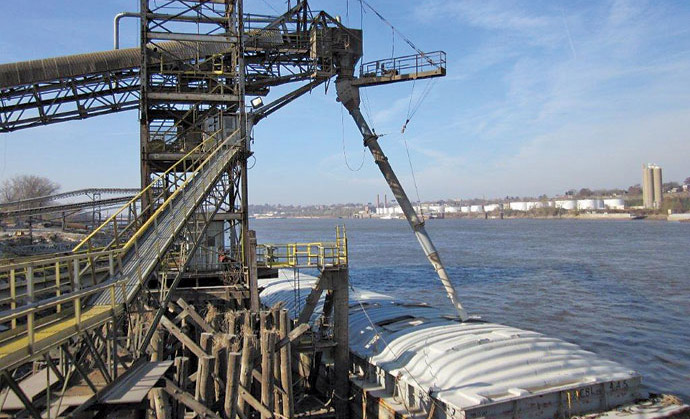 he “Energy Innovations” article published in the September issue of Site Selection makes the case that rail and road networks are being transformed for transportation of supplies related to shale oil and gas production. The same is true of inland waterways. The Mississippi-Ohio River corridor that connects the northeast U.S. with the central U.S. and the intracoastal canals is also being revitalized.

This water network connects the Utica and Marcellus Shales, the Haynesville, Fayetteville and Tuscaloosa Marine Shales, the Eagle Ford Shale and others with downstream facilities from Pennsylvania to Memphis, and south to Louisiana, Houston and Corpus Christi. This network (with nearby rail) is vital, particularly for frac sand, petrochemicals and crude oil.

Frac sand is quarried in Wisconsin, Louisiana, Arkansas, Missouri and Illinois, making the Mississippi River an important mode of transport by barge. The Port of Natchez has announced a US$34-million expansion for trans-loading and storing sand and resin-coated sand. Blain Sand and Gravel and Fores Frac Sand are investing $7 million and $27 million, respectively, to add new processing and handling facilities and upgrade the rail at the port, creating 60 jobs. The Port of Greater Baton Rouge is now home to GNS Frac’s new $10-million sand drying and sorting facility at the Inland Rivers Marine Terminal in Port Allen, La.

Another location near the headwaters of the Mississippi River is Superior Silica Sands’ investment of $50 million to develop an 85-acre (34-hectare) sand-processing plant in northern Wisconsin to produce up to 2.4 million tons per year of frac sand. CN’s partnership investment of $35 million will provide storage facilities and upgrade and restore rail service in Ladysmith and other parts of British Columbia. CN's frac-sand market has grown nearly 70 percent over the last three years to 35,000 carloads and $100 million in revenue in 2011; the company hopes to triple that revenue within five years.

“The construction of our Marshfield resin-coating plant has been deferred at this time,” said CARBO CEO Gary Kolstad, as the company deals with what it calls “the over-supply of varying quality Chinese ceramic proppant.”

Reuters in Dec. 2011 cited U.S. International Trade Commission data showing a 12-fold increase in Chinese proppant imports since 2008, with Chinese proppants expected to account for 13 percent of what analysts call a $3-billion-a-year business. CARBO Vice President David Gallagher, whose company operates its own Chinese proppant plant in Louyang, told Reuters that a proppant plant takes three years to develop, vs. approximately six months for a sand mine.

“We continue to monitor market conditions and we will modify the project timeline accordingly,” said CARBO’s Kolstad in July. “Work on the Millen, Georgia, ceramic manufacturing plant project continues, and we estimate the plant could commence production before the end of 2013.”

The intracoastal canals are important too. The Victoria County Navigation District in Texas recently approved and funded a $10-million-plus expansion project at the Port of Victoria to add a new container dock, rail improvements and roads that are needed to handle increased volumes of frac sand and crude oil. The port is seeing increased volumes of frac sand being barged and railed in for use in the Eagle Ford shale as demand for frac sand continues to outstrip supply.

Many of the largest U.S. project announcements made in recent years have been in petrochemicals, with locations on the inland waterways. New supplies of cheap natural gas and access to ethane and other feedstocks, combined with convenient access to markets, have stimulated these major investments. The American Chemistry Council (ACC) estimates that the industry will expand by 27 percent over the next five years with an estimated 30 projects to be developed, some of which could create as many as 10,000 permanent jobs. Announcements already made include the following:

These announcements are driving rail expansion and manufacturing as well. BP and Tesoro have both announced rail loading/unloading projects adjacent to their refineries in Washington that would produce diesel and LNG from Bakken oil and gas from North Dakota for export. Union Pacific has announced a $200-million expansion of its operations in Louisiana along the Mississippi River between Baton Rouge and New Orleans, including a $40-million support yard in St. James Parish and $50 million for 29 miles (47 km.) of dual tracks. U.S. Development Group’s $60-million to $70-million expansion of a nearby terminal is closely related to this announcement. In addition, Valero’s $298-million investment in its Memphis refinery included a retrofit to run on natural gas, an improvement intended to capitalize on abundant natural gas that would reduce both costs and emissions.

Crude Oil by Barge Too

Crude oil from the shale plays increasingly is making its way to refineries by barge on the inland waterways. The Port of Victoria is already shipping 1 million barrels of crude oil per month, and Kirby Corp., which operates more than 25 percent of U.S. tank barges, recently announced that it has begun shipping crude oil to refineries, and hauling refined products on the return trip. Florida Marine has ordered 10 barges with an option for 18 more, each of which has the capacity to haul 30,000 barrels of crude oil or other liquids. With the U.S. forecast to be the world’s No. 2 oil producer by 2020 at 11.6 million barrels per day, this is only the beginning.