The Bight of the Wind

Germany’s Heligoland is set to serve the offshore wind sector. 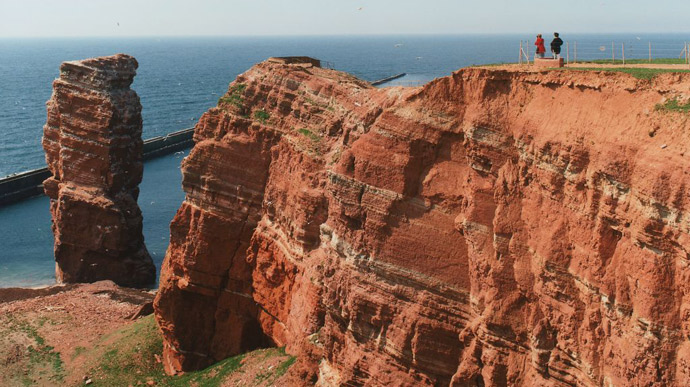 Heligoland’s economy is based primarily on tourism, but the wind energy sector may introduce a new species of revenue.
Photo by Andreas Kaster courtesy of the German National Tourist Board
by ADAM BRUNS
T

RWE Innogy’s new apartment blocks are just part of US$13 million the company is investing in infrastructure and port improvements on Heligoland.

he North Sea's suitability for wind power isn't confined to Scotland. Germany's federal government, in fact, wants to develop 5,000 wind turbines with a capacity of 10,000 MW in the North and Baltic seas by 2020.

A tiny battle-scarred piece of sandstone called Heligoland, located in the German Bight ("bay") some 25 miles (40 km.) from the German coastline, is slated to serve as a service and maintenance hub for some of those massive turbines.

In August, one year after E.ON, RWE Innogy and WindMW announced plans for the construction of a base for the maintenance and operation of their offshore wind farms, RWE celebrated the topping-out ceremony for two apartment blocks near the inland port on the island of Heligoland that will accommodate service staff for the operation and maintenance of the Nordsee Ost offshore wind farm, a 295-MW installation being erected some 19 miles (30 km.) further out. The investment is part of approximately €10 million (US$13 million) RWE is pouring into infrastructure on the island, which 60 years ago reverted to Germany after years of post-World War II training-run bombardment by Britain's Royal Air Force.

"When Heligoland was resettled 60 years ago, this ushered in a new era for Germany's island on the high seas," said Jörg Singer, mayor of Heligoland, last month. "The new beautiful and colorful homes for the offshore employees of RWE Innogy and REpower now again provide new and promising prospects for the future of the offshore companies and the inhabitants of Heligoland."

"We intend to operate our Nordsee Ost wind farm from Heligoland in the next 20 years," said Prof. Martin Skiba, head of offshore wind power at Essen-based RWE Innogy. "Some 30 people will live and work for us on Heligoland in the future. This is also going to benefit the local economy on the island." It already has, as island-based firms were contracted to work on the buildings. Following completion in early 2013, RWE Innogy will rent the first of the two buildings; the turbine vendor REpower Systems from Hamburg will rent the second one.

Construction of roads and the upgrading of the southern port (home of the main service center) will begin before year's end, involving a new pier and up to 10 new mooring berths. Construction of the three-building center, which will comprise approximately 10,000 sq. m. (107,640 sq. ft.), is due to be complete by the end of 2013. RWE Innogy has rented space on the inland port pier and in the southern port in order to be able to use Heligoland while Nordsee Ost is being built. Overall, E.ON, RWE and WindMW plan to create about 150 jobs on the island, with more job opportunities coming from suppliers, construction and shipping companies.

RWE Innogy's wind leadership extends well beyond its home nation's shores. Last week, the company started collecting wind speed data at the site of Gwynt y Môr, one of Europe's largest offshore wind farms off the coast of north Wales. It's part of the Carbon Trust's Offshore Wind Accelerator program, which aims to reduce the cost of offshore wind power by 10 percent by 2015.

"To meet the EU's 15 percent renewable energy target for the U.K., over 18 GW of offshore is likely to be required by 2020, a nine-fold increase over the 2 GW installed to date," says the Carbon Trust. "Delivering this level of deployment will require cost reduction and the introduction of new technologies to allow wind farms to be installed further from shore and in deeper water where the wind resource is better … Since 2003, just over 600 turbines have been installed in U.K. waters, nearly all of which are in water depths less than 20 m., within 25 km. of the shore. To get to 18 GW by 2020, a further 3,000 turbines will need to be installed. The new turbines will be larger and more complicated to install, standing in up to 60 m. of water, as far as 200 km. offshore."
That far offshore work is also plowing ahead in German waters. Three offshore wind farms are to be operated and maintained from Heligoland, including Amrumbank West (approx. 300 MW) from E.ON and the Meerwind project (Süd and Meerwind Ost), a 288-MW installation from U.S. financial investor Blackstone. Meerwind is being built and will be operated by WindMW. All three wind farms are situated between 25 and 35 km. (14 and 22 miles) off Heligoland. An offshore wind farm has a lifetime of about 25 years. Plans call for Nordsee Ost and Meerwind to be commissioned in 2014, and Amrumbank in 2015.

Today the island in the state of Schleswig-Holstein, home to between 1,150 and 1,500 people, makes most of its money on tourism and spa business, as a mostly German clientele (primarily touring from Hamburg or Bremen) seek out its allergen-free air and rejuvenating solitude. Heligoland is approximately 3 hours' sailing time from Cruxhaven, at the mouth of the Elbe River. It's part of the EU, but exempt from the EU VAT, so its economy is based in large part on being a remote and supremely beautiful duty-free shop.

That's a far cry from its past, when it saw naval battles during World War I and its first aerial battle in 1939. The Nazis used it as an emergency naval and food storage base. Thus the British bombed it into submission, forcing 2,000 islanders to abandon their homes.

From 1945 to 1962 it served as a bombardment practice ground, including the release of 6,700 tons of munitions on April 18 ,1947, to destroy all the military installations, one of the largest non-nuclear detonations in history. The result was a moonscape plateau on the south side of the island that now goes by the misleadingly quaint name of mittelland ("middle land"), as it lies between the main island and a nearby dune that was forcefully separated from its mother rock by a storm surge in the early 1700s, when the territory belonged to the Danes. 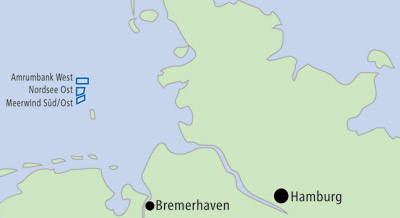 This map shows Heligoland's location in relation to the German mainland.
Map courtesy of RWE

An April 2011 account in Britain's Observer noted that between its seizure by the Brits during the Napoleonic Wars in 1807 and its ceding to the German Reich in 1890 in exchange for Zanzibar and some territory in East Africa, the archipelago was "dubbed the 'Gibraltar of the North Sea' and considered of similar strategic importance as its Mediterranean equivalent."

Today Heligoland's strategic importance to wind is just a small part of Germany's renewables supremacy. According to the "Taxes and Incentives for Renewable Energy Report" issued by KPMG International in June, the country saw US$6.7 billion invested in various renewables projects in 2010. A raft of incentives from government-owned bank KfW includes support for offshore wind projects within the German Exclusive Economic Zone in the North and Baltic seas. Among the program's terms:

In addition to the outpost on Heligoland, RWE and other wind companies have established major operations in the port complex of Bremerhaven, which is looking at developing a long-term offshore terminal in the south of Bremerhaven on the Weser River ("Blexer Bogen") as a heavy load, assembly and transhipment facility for the offshore wind energy industry.

"The example of Heligoland goes to show that offshore wind energy drives the economic development along the coast and on the islands in the 21st century," said Jörg Kuhbier, CEO of the Offshore Wind Energy Foundation, at the original Heligoland service hub announcement in August 2011. "Heligoland is just the beginning! The creation of more offshore infrastructures — ports and logistics — for the development of offshore wind power has to be supported and coordinated as a national project by the federal and state governments."

The strong support of German federal and state governments is one reason Germany is among renewable energy leaders in nearly every category, as the chart below from the KPMG report illustrates. 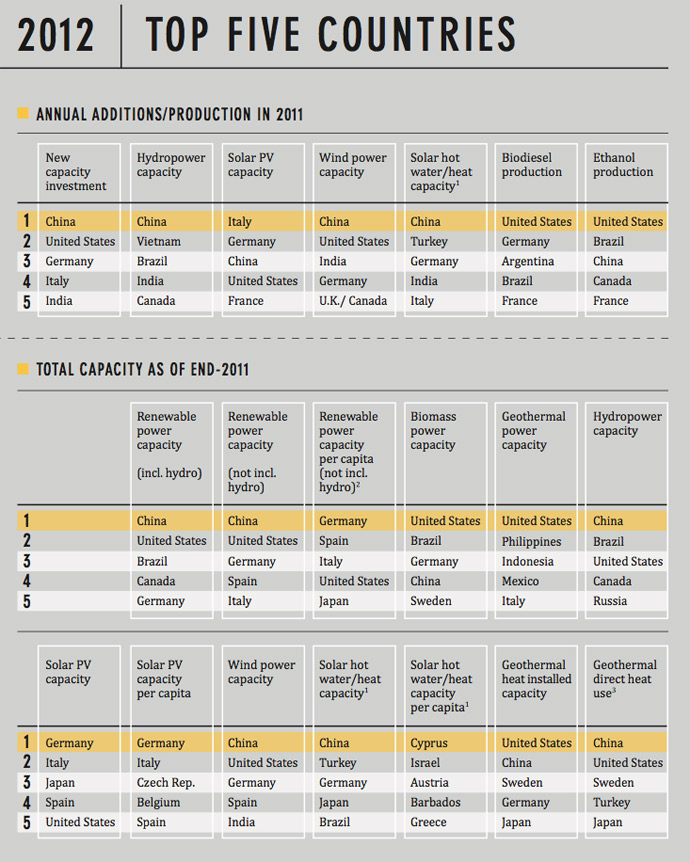 KPMG’s June 2012 report on incentives for renewables in 23 major countries found Germany among the leaders in nearly every category.