In Texas, 'project pipeline' is not just an expression. 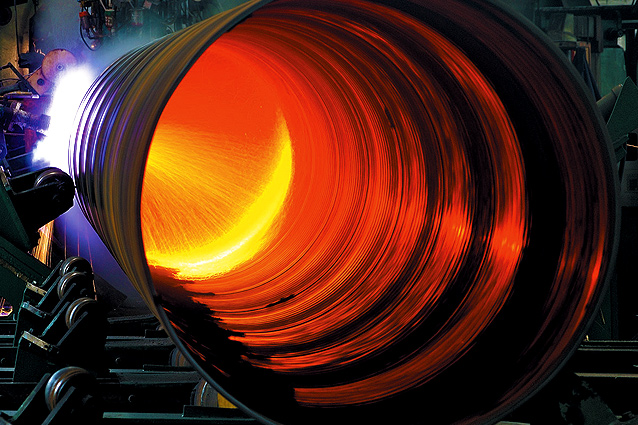 Borusan Mannesmann until now has fabricated pipe only in Turkey and Italy.
Photo courtesy of Borusan
By ADAM BRUNS
O 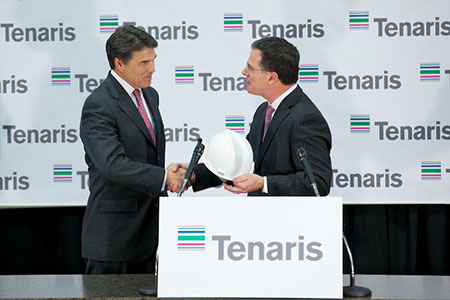 ne's called Bay City and one's called Baytown. They're about 100 miles apart, on opposite sides of Houston. But the two municipalities are on the right side of two companies from the Mediterranean that will bring separate pipe manufacturing plants to the state, accounting for more than $1.4 billion in investment and 850 jobs.

As documented in Site Selection's March cover story, Tenaris in February announced a 600-job, $1.3-billion steel pipe manufacturing facility in Bay City in Matagorda County, best known as the leading location in North America in the Audubon Christmas Bird Count thanks to its position along the flyway for migratory birds.

Tenaris will be alighting in the county thanks in part to $6 million from the Texas Enterprise Fund (TEF). Gov. Rick Perry recruited company leadership during his economic development trip to Italy last year, and also at the Formula 1 race in Austin.

Tenaris is a global manufacturer of steel pipe products used for drilling in the energy industry. The 1 million-sq.-ft. (92,900-sq.-m.) complex will include a seamless pipe mill, heat treatment and premium threading facilities. Once complete, the mill is expected to produce 600,000 tons of pipe annually.

"We appreciate the assistance provided by the Governor, his staff and the many local officials involved in this significant milestone for Tenaris," President of Tenaris North America Germán Curá said. "We chose Texas and Matagorda County because of the strong business climate and its proximity to transportation hubs, a skilled workforce and Houston, which is the epicenter of the energy industry and home of Tenaris' North American headquarters."

"Matagorda County will still be known as number one in Christmas bird count," said State Senator Glenn Hegar, "but now we can add a major steel pipe manufacturing facility to the list of reasons to live and work at the mouth of the Colorado River."

As it happens, a flyover of sorts was under way on Christmas Eve 2012. That's the day Turkey's Borusan Mannesmann Pipe announced from Istanbul that after several years of growing exports to the U.S., it planned to invest $150 million in a new U.S. steel pipe manufacturing plant in the U.S. to serve the energy sector. The finalists? Texas and Oklahoma. 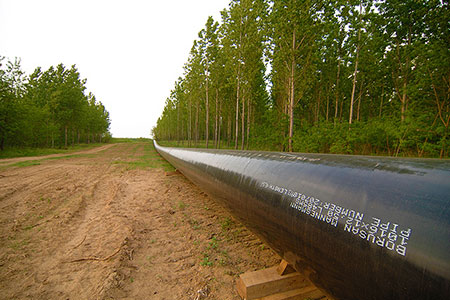 Borusan Mannesmann's pipe is being used by pipeline projects worldwide, including major projects in the United States.

"Borusan Mannesmann now aims to become a local manufacturer in order to be closer to the market and its customer base," said the announcement of the plant, which would have a capacity of 300,000 tons annually of OCTG and ERW line pipes and a target revenue of $500 million. Plans called for a 125-acre (50-hectare) site and hiring up to 350 people.

"In a first for the Turkish industry, we are now becoming the first Turkish company to invest in the steel pipe sector in the United States with this venture," said Agâh Uğur, Borusan Holding Group CEO, in December. "This is our second overseas investment after our automotive pipe manufacturing plant in Italy. We have a strategic and long-term view of the American market due to its size and quality approach. Favorable changes to the energy policies in the United States, as well as the advancements in the shale gas technology, were the factors that hastened our investment decision at this time of global recession."

In March, Gov. Perry announced that Baytown, just north of Houston, would be the home of the new Borusan Mannesmann project, though the numbers had since come down slightly to $148 million and 250 jobs. The state is providing $1.6 million through the Texas Enterprise Fund (TEF) to close the deal.

Borusan Mannesmann is a global leader in steel pipe production for a variety of industries, including oil and gas drilling and transmission, with current production of around 1 million tons of pipe products.

"This investment will establish Borusan as a local manufacturer in the U.S. market," Borusan Chairman A. Ahmet Kocabıyık said. "This investment is the beginning of a new era, not only for economic relations between the U.S. and Turkey, but also for our steel sectors."

When one destination gets 40 percent of your exports, it's time for a new plant.

To date, Borusan Mannesmann has realized many oil and natural gas pipeline projects in Turkey, Central Europe, and North Africa. The Elba Express and Line 300 natural gas pipeline projects brought the company prestige in the U.S. market. Over the last three years, Borusan Mannesmann has become one of the largest international companies that export natural gas and oil exploration and extraction pipes. Exports increased from $90 million in 2009 to $184 million in 2012, with 40 percent of those exports United States-bound.

Turkish conglomerate Borusan Group launched the steel pipe company as its first enterprise in 1958, and has grown the company from 27 employees and five types of products to 1,250 employees and 4,000 items today. It partnered with Germany's Salzgitter Mannesmann GmbH in 1998. The projects using the company's pipe include Baku-Tbilisi-Ceyhan Pipeline, The NK1 Oil Pipeline, The Şahdeniz, The Blue Stream, The Turkey-Greece-Hungary Gas Pipeline and The United States Elba Express Natural Gas Pipeline.

The company has five plants in Turkey and Europe, including locations in Gemlik and Halkali, Turkey, and Vobarno, Italy. According to the company, the 85,409-sq.-m. (919,365-sq.-ft.) Gemlik plant was established in 1975 and employs 550 people. A separate 53,942-sq.-m. (580,645-sq.-ft.) pipe plant to serve oil and gas line pipe demand was established in 2010, employing another 90. The Halkali plant employs 300 making industrial pipes and profiles for such sectors as automotive, furniture, bicycle and white goods. And the Vobarno plant employs 90 making cold-drawn pipes primarily for automotive industry use in such countries as Italy, Germany, Spain and France.

The company's rising profile is a good match with the rising profile of Chambers County for its industry sector. According to Site Selection's New Plant Database, the county has welcomed eight projects since Jan. 2010 totaling more than $870 million in investment, and nearly all having to do with oil and gas equipment and vessel fabrication. Among the investors are Lone Star NGL, Cedar Bayou Fractionators, Gulf Coast Fractionators, ONEOK Partners and Energy Transfer Partners in Mont Belvieu, and Prime Flexible Steel in Baytown.

Since Jan. 2008, Site Selection has tracked more than 200 facility locations or expansions in the United States involving pipe manufacturing companies. Thirty percent of them have taken place in Texas. 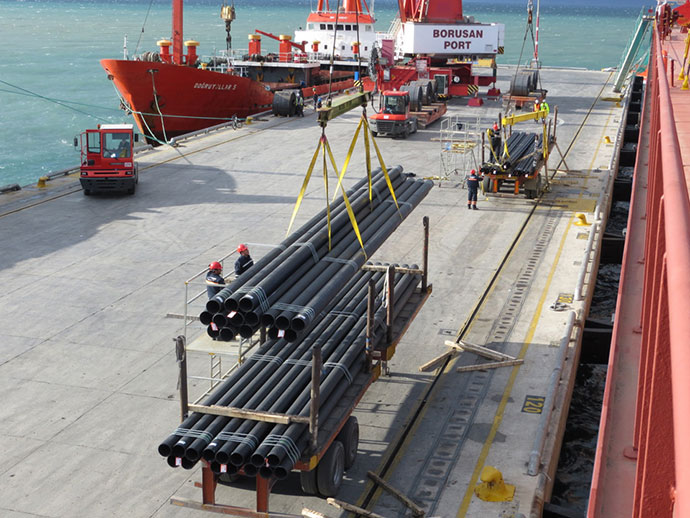 Borusan Mannesmann saw exports of its pipe products double between 2009 and 2012 with the help of the strategically placed Borusan Port in Gemlik (pictured), where two pipe plants are located. Now a good chunk of those former Turkish exports will be fabricated in Baytown, Texas.
Photo courtesy of Borusan