Givebacks and the Grid

Wilsonart's moves beyond the low-hanging fruit grow its
savings and sustainability profile at the same time. 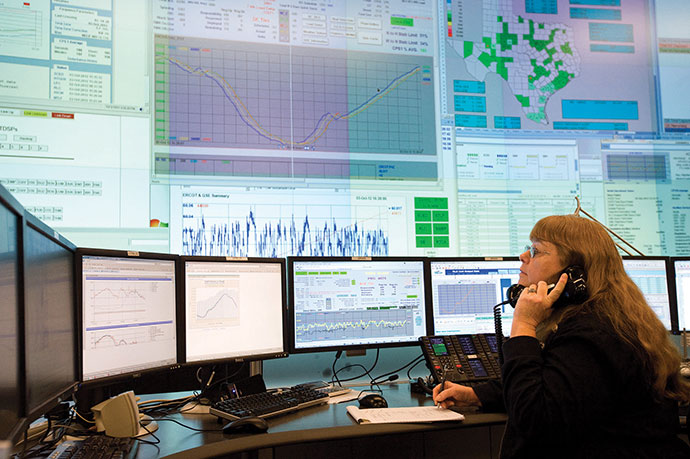 An Electric Reliability Council of Texas (ERCOT) control room professional helps the system operator manage the flow of electric power to 23 million Texas customers — representing 85 percent of the state's electric load. An ERCOT news release in late March noted that "the first wind record for 2013 was set on Feb. 9 at 7:08 p.m., with wind resources providing nearly 28 percent of the 34,082 MW load at the time."
Photo courtesy of ERCOT
By ADAM BRUNS
L 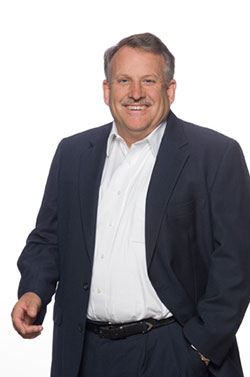 Scott Harrison is director of engineering and innovation for TXU Energy.

Based on the company's historic energy consumption, Wilsonart's commitment will represent a cut of more than 22 million pounds of carbon dioxide emissions.

But it's just one of many ways the 50-plus-year-old company has worked to improve its sustainability profile, including efficiency measures at its home complex in Temple. And it's done so in partnership with its retail electricity provider in the state's deregulated power market, TXU Energy.

Among the steps the company has taken are the installation of high-bay fluorescent lighting in place of metal halide fixtures and replacing T12 lighting with T8 lighting, cutting consumption by almost 5 million kilowatt-hours (kWh) per year. One refit involved replacing more than 4,500 fixtures. The company also is using new lighting controls in key areas, reducing consumption by more than 1 million kWh. Wilsonart also recently hosted a two-day energy fair, where TXU Energy presented energy-savings ideas and solutions for the company's employees, furthering its commitment to sustainability.

"The work Wilsonart has performed illustrates that relatively easy changes can make a big difference in consumption," said Scott Harrison, director of engineering and innovation for TXU Energy, last month. "That saves money, creates a better work environment and makes the company an even better corporate citizen."

Dan Case, manager of engineering and real estate for North America at Wilsonart, says his portfolio includes large manufacturing sites in Temple; the town of Fletcher in western North Carolina; and Montreal, Quebec, Canada, where the company acquired the Arborite firm 14 years ago. The portfolio also includes a network of 20 distribution centers scattered throughout North America. Wilsonart owns most of the main DCs, and leases a smaller group of facilities. He says the energy steps taken stem from "a very formal and dedicated position Wilsonart has taken with regard to sustainability." And it starts with the large energy footprint at the company's manufacturing facilities.

"There are a couple of avenues," he said. "One is consumption, and the other is procurement. And we're actively working on both." 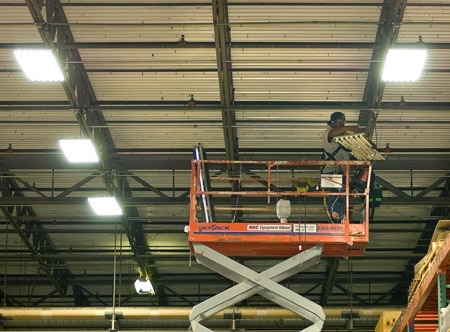 A total lighting conversion for Wilsonart’s Temple North and Plate Plant facilities in Texas replaced nearly 3,600 existing lights with high efficiency T-8 fluorescent fixtures. The new fixtures are about twice as efficient in converting electrical energy to light at the same or greater light output, equaling a roughly 50-percent reduction in electrical consumption for lighting and 10-percent reduction in overall electricity use.
Photo courtesy of Wilsonart

As the company negotiated its next contract period with TXU, says Case, company officials asked what TXU could do as a partner in terms of supporting more creative approaches to sustainability-minded procurement. That's how the renewable energy credits for the 2013-2014 contract period came about. As for consumption, TXU made some rebate dollars available, as it and other providers seek to optimally manage the overall load across the ERCOT grid, which represents 85 percent of the overall load in the state.

"We received a significant subsidy for a software package we're implementing that will give us the ability to have granular data on our energy usage," says Case of a customizable product from Rockwell that his team has nicknamed "WAGES" because of its application to water, air, gas, electricity and steam.

"Our energy portfolio from the standpoint of inputs, and how those are used for creating mechanical energy, is fairly complex. We have a lot of levers we can pull. This software and telemetry will give us insight into our processes unlike anything we've ever had. We know it's going to reveal opportunities for future energy savings … I think everyone recognizes that the historically low energy prices we see now are not going to hold for the indefinite future."

Case says Wilsonart is actively considering on-site power generation options such as combined heat and power and solar. After all, he says, "In Texas we have 13 acres of roof."

He and his colleagues also are proactive in seeking green attributes and actions as they evaluate landlords and leases, whether the topic is water use, lighting, natural gas or simply smart energy practices. "There's work we can do to make it more formal and rigorous going forward," he says. We certainly have a keen interest in that. Particularly in the market we're in, so closely tied to facilities, construction and remodeling, we are keenly sensitive to that."

Does 70-Percent Savings Get Your Attention?

"We've given out over $10 million to our customers," says TXU's Scott Harrison of the Brighten GreenBack program, which is offered to any medium or large business customer with a TXU Energy contract. Customers range from industrial end users such as Wilsonart to hospitals, warehouses and commercial office buildings. Energy-efficiency measures receiving rebate dollars have included large tiller replacements, fan controls, pumping for HVAC systems, but lighting and lighting controls, especially in warehouses, "have become really big," he says.

"It's not as much LEDs as it is going from metal halide to high-bay fluorescents," he says, noting the still relatively high cost of LEDs. "A control scheme works instantly. If you have a warehouse with a lot of aisles, you can have occupancy centers where it will turn on if a person comes down that aisle, and at other times it's in a 10-percent usage position."

Harrison can't mention most customers, but he can cite public-sector customers such as various independent school districts across the state, and one new contract with the City of Dallas.

"We recently signed a deal with them, and part of that is going to be an LED replacement retrofit of the majority of the fixtures in Dallas City Hall, an I.M. Pei-designed building," he says. "Their energy usage will go down, and their maintenance cost will go down significantly."

How significantly? Harrison explains that LEDs frequently have warranties extending to 50,000 or 100,000 hours, whereas other products routinely offer only between 15,000 and 20,000 hours. That translates into "around a 70-percent maintenance savings," he says.

It's not just lighting. Another industrial customer, says Harrison, faced an imminent installation of big energy-eating resistant heating units. "But they could spend a little more money and put in heat exchangers and have the resistant heaters in emergency and startup situations. They saved lots of kWh based on that one change, and we gave them rebates for that."

Harrison clarifies that TXU Energy's program goes over and above the energy efficiency incentives offered by the State of Texas. "We're in business to sell electricity, but we give rebates to people to use less," he says. "The theory is that the more we can be of benefit to our customer, the more we can be a trusted partner and have a long-term relationship."