One company's venture aims to satisfy part of the nation's renewable fuel standard requirements by using vegetative matter and even municipal solid waste. 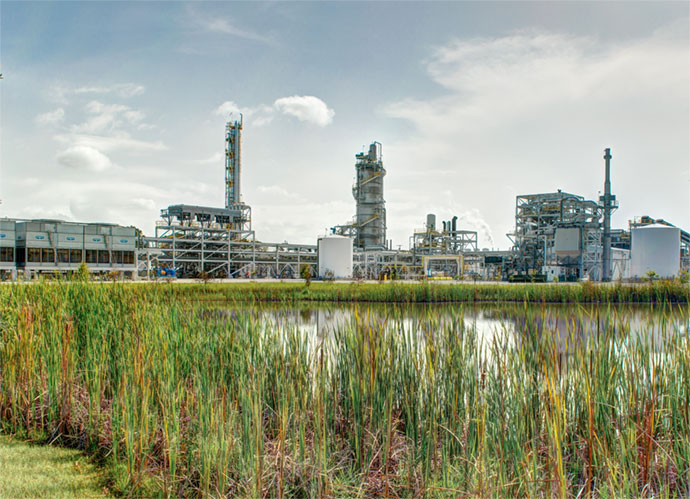 INEOS Bio has started production of commercial-scale bioethanol at its first facility near Vero Beach, Fla. The Indian River BioEnergy Centre is producing commercial quantities of transportation fuel from vegetative and wood waste, and at the same time exporting renewable power to the local community.
Photo courtesy of INEOS
by ADAM BRUNS
L

ast week the EPA finalized the 2013 percentage standards for four fuel categories that are part of the Renewable Fuel Standard (RFS) program established by Congress. Most of these fuels are produced by American farmers and growers domestically and help reduce carbon pollution.

The final 2013 overall volumes and standards require 16.55 billion gallons of renewable fuels to be blended into the U.S. fuel supply (a 9.74-percent blend). This standard specifically requires:

The standards reflect EPA's updated production projections, which are informed by extensive engagement with industry and a thorough assessment of the biofuels market.

During the rulemaking, EPA received comments from a number of stakeholders concerning the "E10 blend wall." Projected to occur in 2014, the "E10 blend wall" refers to the difficulty in incorporating ethanol into the fuel supply at volumes exceeding those achieved by the sale of nearly all gasoline as E10. Most gasoline sold in the U.S. today is E10.

In the rule issued last week, EPA is announcing that it will propose to use flexibilities in the RFS statute to reduce both the advanced biofuel and total renewable volumes in the forthcoming 2014 RFS volume requirement proposal. EPA is also providing greater lead time and flexibility in complying with the 2013 volume requirements by extending the deadline to comply with the 2013 standards by four months, to June 30, 2014.

The Energy Independence and Security Act (EISA) established the RFS program and the annual renewable fuel volume targets, which steadily increase to an overall level of 36 billion gallons in 2022. To achieve these volumes, EPA calculates a percentage-based standard for the following year. Based on the standard, each refiner and importer determines the minimum volume of renewable fuel that it must ensure is used in its transportation fuel.

Site Selection's New Plant Database has tracked 38 biofuel or ethanol facilities since Jan. 2011 in the US and Canada, including the $130-million cellulosic ethanol project from Texas-based INEOS Bio near Vero Beach, Fla.

As it happens, as of late July, that facility, named the Indian River BioEnergy Centre, is now producing cellulosic ethanol at commercial scale. Its first ethanol shipments will be released this month.

It's the first commercial-scale production in the world using INEOS Bio's breakthrough gasification and fermentation technology for conversion of biomass waste into bioethanol and renewable power.

"We are delighted with the progress made by our team at Vero Beach," said Peter Williams, CEO of INEOS Bio and chairman of INEOS New Planet BioEnergy. "They have successfully addressed the challenges of moving a new technology to large production scale for the very first time. Consequently, we are now pleased to announce that we are producing commercial quantities of bioethanol from vegetative and wood waste, and at the same time exporting power to the local community - a world first. We expect to spend the remainder of 2013 putting the plant through its paces, and demonstrating full nameplate capacity.

"We remain convinced that the ability to divert waste materials from communities by converting them into competitively priced renewable fuel and power offers an excellent value proposition," Williams continued. "It helps solve waste disposal issues, contributes to the supply of affordable and renewable fuel and energy, creates attractive jobs, and provides a sustainable source of value for the community. We look forward to taking the next steps in building a global business based on the broad deployment of this advanced technology."

The BioEnergy Centre is a joint venture project between INEOS Bio and New Planet Energy. The facility has already converted several types of waste biomass material into bioethanol, including vegetative and yard waste, and citrus, oak, pine, and pallet wood waste. It will have an annual output of eight million gallons (24kta) of cellulosic ethanol and six megawatts (gross) of renewable power. The Centre is also permitted to utilize municipal solid waste (MSW), quantities of which will be used for bioethanol production at the Centre during 2014.

The Centre created more than 400 direct construction, engineering and manufacturing jobs during its development. The project sourced more than 90 percent of the equipment from U.S. manufacturers, creating or retaining jobs in more than 10 states. The Centre has 65 full-time employees and provides $4 million annually in payroll to the local community.

INEOS Bio is one of the global businesses in INEOS, one of the world's leading chemicals companies, and a global manufacturer of petrochemicals, specialty chemicals and oil products. Comprising 15 businesses, the production network spans 51 manufacturing facilities in 11 countries. The company produces more than 60 million metric tons of petrochemicals, employs 15,000 people and had sales in 2012 of $43 billion.

Other INEOS projects currently on the drawing board include a $75-million ethylene plant expansion in Greater Houston; a $24-million chemicals expansion in Lima, Ohio; and a joint venture just announced with South Africa's Sasol to manufacture high-density polyethylene. The final location has yet to be determined, says INEOS spokesman Charles Saunders. The two partners already have substantial footprints in Louisiana and Texas.