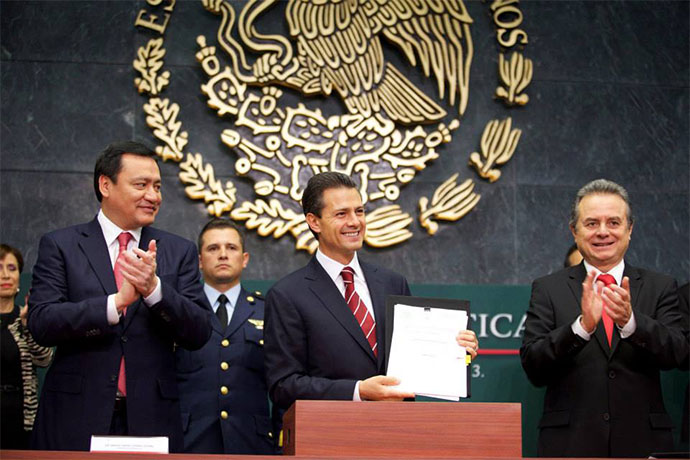 Photo courtesy of Mexico's Office of the President

Something reformers have sought for years in Mexico may be on the verge of actually occurring. Mexican President Enrique Peña Nieto (pictured) this week proposed energy reforms that include allowing foreign companies to invest in state-owned Petroleos Mexicanos, or Pemex.

The speech came just weeks after Nieto witnessed the signing of a US$250-million agreement between the Mexican Navy and Pemex that calls for the construction of 22 vessels for the company's minor fleet. The contract will create 1,800 jobs.

July 29 saw the simultaneous launch in three continents of the BMW i3, "the world's first premium electric vehicle designed from the ground up to be powered by an electric drive system." The 125 kW/170 hp electric motor of the BMW i3 enables locally emission-free driving to a range of between 130 and 160 kilometres (approx. 80 to 100 miles). BMW says it will offer fast charging capability as an option, allowing i3 owners to regain up to 80 percent of charge in as little as 20 minutes. At a base price of 34,950 euros, the car will be available to customers in Germany in November 2013. 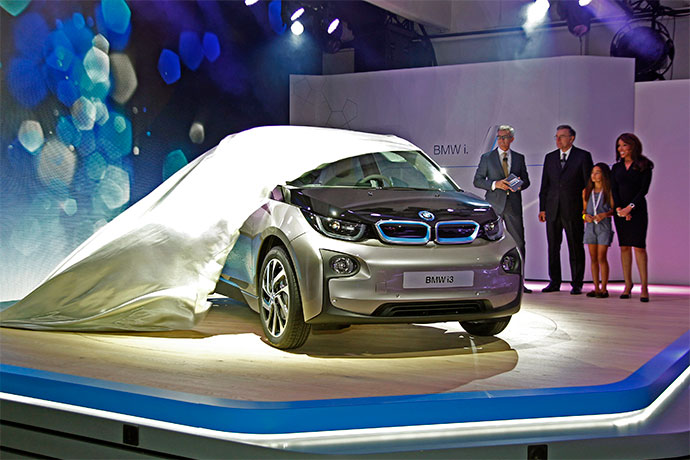 Photo courtesy of BMW via Newsmarket

The Nuclear Energy Institute (NEI) and the Nuclear Waste Strategy Coalition (NWSC) jointly issued the following statement Aug. 13 after the U.S. Court of Appeals for the D.C. Circuit issued a decision in Aiken County v. NRC. The lawsuit, brought by the states of Washington and South Carolina, Aiken County, S.C., state public utility regulators, and others after the Obama administration's termination of the Yucca Mountain repository program, sought a court order to force the Nuclear Regulatory Commission (NRC) to resume its review of a construction license application for a used nuclear fuel disposal facility at Yucca Mountain, Nev.

"Today's ruling is a clear signal regarding the NRC's obligation to review the Department of Energy's license application for a repository at Yucca Mountain and to issue a final decision granting or denying the license. The nuclear energy industry fully expects the NRC to take all necessary steps to immediately resume its independent scientific evaluation of the Yucca Mountain license application, as directed by the court. Similarly, the Energy Department must renew its efforts on this project and fully support the licensing process.

"Further, we encourage Congress to provide appropriate funding in FY2014 and beyond to facilitate completion of the NRC's independent safety review. Consumers of electricity generated by America's 100 reactors, who have contributed nearly $35 billion in fees and interest to the federal government specifically for used nuclear fuel management, deserve to know whether Yucca Mountain is a safe site for the permanent disposal of used nuclear fuel."

Ever wonder which state has the most used nuclear fuel in storage? The answers in this NEI map might surprise you: 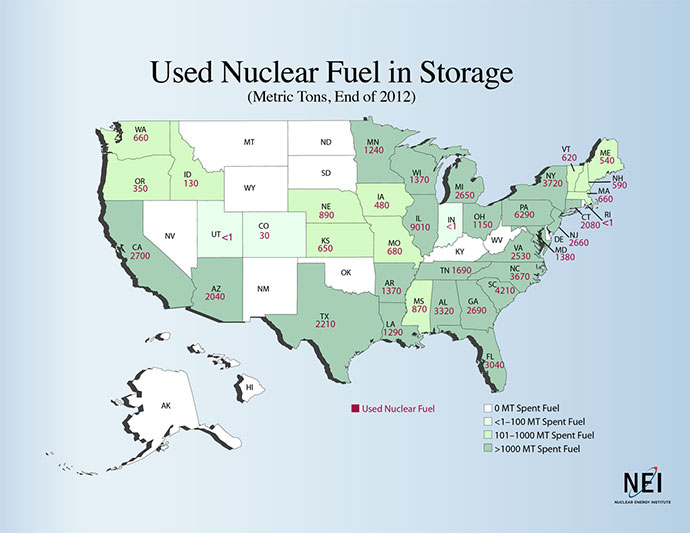 The US Dept. of Energy announced last week that it has conditionally authorized Lake Charles Exports, LLC (Lake Charles) to export domestically produced liquefied natural gas (LNG) to countries that do not have a Free Trade Agreement (FTA) with the United States from the Lake Charles Terminal in Lake Charles, La. Lake Charles previously received approval to export LNG from this facility to FTA countries on July 22, 2011.

The development of U.S. natural gas resources is having a transformative impact on the U.S. energy landscape, helping to improve our energy security while spurring economic development and job creation around the country. This increase in domestic natural gas production is expected to continue, with the Energy Information Administration forecasting a record production rate of 69.96 Bcf/d in 2013.

The runaway train accident that killed 47 people in Quebec last month is not halting development of more oil terminals. Last week U.S. Development Group and Gibson Energy announced they will build a new terminal in Hardisty, Alberta. Expected to handle up to two unit trains of up to 120 railcars per day of oilsands crude, the terminal will be ready by the first quarter of 2014 and will be served by Canadian Pacific Railway. Contracts already have been signed for more than 70 percent of the 140,000-barrel-per-day output of the terminal.

The U.S. Environmental Protection Agency (EPA) announced last week it has updated its RE-Powering Mapping and Screening Tool, which will now provide preliminary screening results for renewable energy potential at 66,000 (up from 24,000) contaminated lands, landfills, and mine sites across the country. The RE-Powering America's Land Initiative, started by EPA in 2008, encourages development of renewable energy on potentially contaminated land, landfills and mine sites when it is aligned with the community's vision for the site.

"We see responsible renewable energy development on contaminated lands and landfills as a win-win-win for the nation, local communities, and the environment," said Mathy Stanislaus, assistant administrator for the Office of Solid Waste and Emergency Response.

For solar energy alone, EPA identified over 10,000 contaminated sites with the potential to install a 300-kilowatt solar array or greater. Based on mapped acreage, these sites could cumulatively host solar energy systems that capture greater than 30 times more solar energy than all renewable energy systems operating in the United States today.

Smart grid technology is not just for futuristic mixed-use neighborhoods. US Secretary of State John Kerry on Aug. 1 delivered remarks at the Zero Point Grid Substation in Islamabad, Pakistan, which recently installed smart meters that allow for more efficient and cost-effective electricity distribution. The United States Agency for International Development (USAID) funded this project, which has helped install meters at all of Pakistan's public electric utilities. The smart meters generate real-time load-data information, which is used to reduce unscheduled loadshedding, and to provide more people with reliable power. Kerry singled out the lack of energy as one of the single greatest impediments to growth, observing that "how much energy we provide, and how fast, is going to be critical to the feelings of people in Pakistan that progress is being made in terms of their economic future."

USAID-funded energy projects will add more than 1,200 megawatts of power to the national grid of Pakistan by 2014, enough power to benefit more than several million households, said Kerry. Pakistan's new National Power Policy also calls for renovation of two dams and of several thermal power plants. "The minute there is increased power, there will be more jobs, more economic opportunity, Pakistan will grow faster, and people will feel the difference," said Kerry. 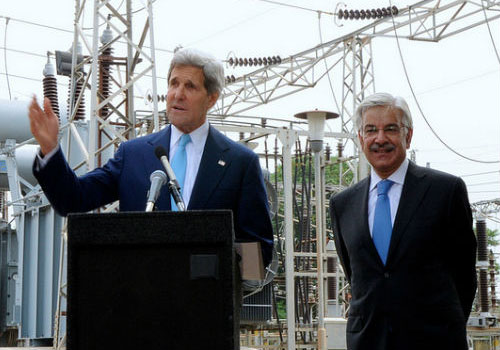 US Secretary of State John Kerry appeared with Pakistani Minister of Power and Water Khawaja Asif at the Zero Point Grid Substation in Islamabad earlier this month.
photo courtesy of US State Dept.

The summer issue of the Atlantic Provinces Economic Council's Atlantic Currents sees Atlantic Canada continuing to experience mixed economic performance in 2013, while interest is growing in exploration and new energy projects. "While Newfoundland and Labrador and Prince Edward Island made positive economic gains in the first half of 2013, Nova Scotia's economy was sluggish and New Brunswick's economy displayed further deterioration," said APEC Senior Policy Analyst Fred Bergman. International exports in Atlantic Canada declined by almost 6 percent so far this year as a result of lower energy exports and only Nova Scotia managed an increase in international exports. However, the energy sector remains a bright spot in the Atlantic economy. "Energy exploration appears to be gaining momentum in the region," he said. "Newfoundland and Labrador and Nova Scotia continue to promote industry interest in offshore exploration with both provinces investing in improved seismic and other geophysical information of their respective offshore areas." In addition, said APEC, greatly increased North American natural gas production is boosting interest in Atlantic Canada to develop new liquefied natural gas export capacity.