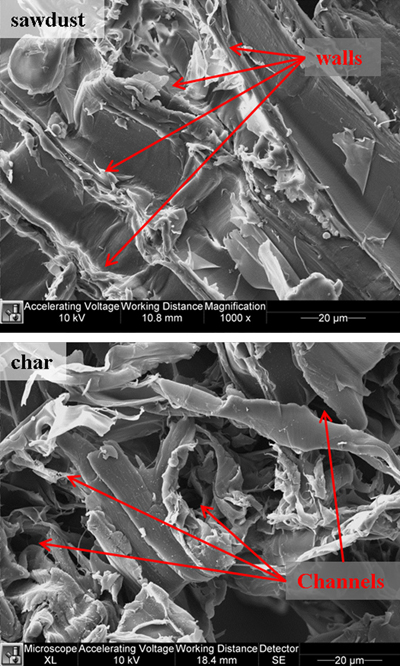 SEM images show pinewood sawdust (top) and char (below) using a Philips XL40 FESEM at 1,000 times magnification. The sawdust contains smooth surfaces divided by parallel walls. In contrast to the sawdust, the char surface appears rough because of randomly oriented fibers that exhibit significant wrinkling. Numerous wide tunnels protruding into the char particles are observed. These tunnels provide pathways for transport of CO2 into the particle.
Image by Indraneel Sircar courtesy of Purdue University

hat if it were possible to take the woody debris left behind from harvesting, logging or mine site-clearing and develop it into a substance that could be added into soil, not only making the soil more productive and able to retain more moisture, but to stabilize it against erosion?

And what if, in creating that material, the by-product was able to be processed into a synthetic fuel additive or source that led to outcomes like fewer carbon emissions and a decreased dependence on petroleum?

Those are a couple of the questions — in layman’s terms — being asked in separate studies by researchers at the University of Nevada Cooperative Extension and at Purdue University.

They are doing the first large-scale field test of a device called a “mobile rotary pyrolysis reactor.” Simply put, the machine is like a large high-tech kiln or airtight oven, baking the woody debris at high temperatures while excluding oxygen. The result is a charcoal-like substance called biochar. The more oxygen excluded from the process, the more biochar is produced. Research has already shown that biochar is a soil enhancement because of its ability to hold carbon and increase soil fertility.

The biochar produced by the mobile reactor will be tested in Eureka County’s Diamond Valley and at the Ruby Hill Mine. The Diamond Valley site was chosen because the soil is historically drier, due to over-pumping of the water supply. Farmers pump a combined total of approximately 32.6 million gallons of water a year, while the aquifer only recovers about 6.5 million gallons annually.

Diamond Valley farmers have already been asked to reduce their water pumping by 60 percent. “The farmers are already adopting new technology to preserve crops and stretch their water usage, but the Diamond Valley aquifer is still close to collapse,” said Fred Steinmann, Eureka County Extension educator, in a news release. “We’re looking at biochar for its ability to lock and retain water.”

According to information from the International Biochar Institute, results of other studies attempting to demonstrate biochar’s ability to help soil retain moisture have demonstrated success. An Australian national science study released in 2009 found that, “Many studies where the effect of biochar on crop yield has been assessed have cited moisture retention as a key factor in the results.”

The potential economic impact of the research project is multi-faceted, but pretty basic. Better soil generally means better plant growth, whether crops or reforestation. Soil that retains moisture to a higher degree means less water pumping by farmers. Indirectly, the reduction in the carbon footprint alone as the supply chain adjusts downstream makes the technology worth exploring.

In addition to the Diamond Valley research, biochar research is taking place at the Ruby Hill Mine, a gold mine slated to close in 2014 before shifting into care-and-maintenance mode in 2015. Federal and state law requires that mines that close must create a reclamation plan for the tailing piles, the rock and soil removed from the mine.

Researchers are examining whether the addition of biochar to the tailing piles will stabilize and strengthen the soil to keep it from eroding. “We want to use biochar as a soil amendment — something added to the soil that allows for microorganisms, and eventually plants, to grow,” said Steinmann. The researchers are testing a variety of biochar mixes and seeds in small plots at the mine. The mix of soil and biochar deemed most conducive to plant growth will be used for the large-scale test on a significant portion of the remaining trailing piles.

Discovering and producing such a mix, created from organic materials, could have far-reaching implications for agricultural erosion and water retention issues in places like sub-Saharan Africa.

A Step Worth Taking

Meanwhile, researchers at Indiana's Purdue University are attempting to create synthetic liquid fuel from ‘recalcitrant biomass,’ according to research that will be published in Fuel magazine’s March 2014 issue. The research involves the use of large particles of biochar composed of more stable materials, like carbon, that are less susceptible to degradation. Purdue researchers conducted successful tests converting large pinewood char particles using reactors called "gasifiers." They determined that the time it took to break down larger pinewood char particles was comparable to smaller particles.

They also used a technique pioneered by Purdue’s Professor Rakesh Agrawal, introducing hydrogen into the coal and biomass processing reactor to see whether it’s possible to create less carbon dioxide while increasing the amount of liquid fuel that’s generated. A study published in 2009 speculates that carbon dioxide could be reduced by 40 percent using the technique.

The transformation of organic materials into fuel has already been proven to be a successful enterprise. Honeywell and others have been working toward possible use of biofuels in aircraft, running a successful test flight of an Interjet Airbus A320-214 from Mexico City to Tuxtla Gutierrez, Chiapas in 2011. The research and future experiments at Purdue will help develop new techniques that will reduce cost and improve efficiencies in manufacturing the fuels.

An entrepreneur in Durango, Colo., J.R. Ford, owner of Renewable Forest Energy, has developed a project to thin approximately 1,900 acres (770 hectares) of public and privately owned forested land. The ponderosa pines and Gambel oak would be used to produce sawmill lumber but the forest debris — pine needles, bark and wood chips —would go through a process called gasification which is expected to produce five megawatts of electricity, enough to fuel 4,700 homes, to be sold to the local energy company, La Plata Energy Association. The goal would to have power to sell by the third quarter of 2015.

According to a fact sheet titled ‘Biochar in Colorado,’ produced by the University of Colorado Extension and written by Drs. Francesca Cotrufo, Catherine Keske and G. Lohman Birch, biochar is attracting attention from both the scientific and the economic communities. They write, “The race is on between soil scientists to document and quantify the biophysical impacts of biochar on soil chemistry and the entrepreneurs to promote a product that yields uncertain positive biophysical outcomes.”

A similar dynamic is at play in the Purdue study. Jay Gore, the Reilly University Chair Professor of Combustion Engineering said, “This study, specifically on the widely available pinewood, moves us a step closer toward mass producing this as a synthetic fuel for uses by the U.S. air transportation system, thereby reducing our reliance on petroleum oil.”