The UK government reports that Scotland’s renewable energy use has reached new heights.

A new report from the Texas Clean Energy Coalition says the same could happen soon in the Electric Reliability Council of Texas (ERCOT) system.

The N.C. Utilities Commission (NCUC) last week approved a new renewable energy program for certain Duke Energy Carolinas customers in North Carolina. The Green Source Rider, approved by the NCUC on Dec. 19, is an experimental program designed to give energy-intensive customers, such as manufacturers, data centers, college campuses and big-box retailers, the option of offsetting some or all of their energy consumption from new load — such as a new or expanded facility — with renewable energy.

The complete Green Source Rider filing can be viewed here: http://www.duke-energy.com/pdfs/2013111501-addendum.pdf. The NCUC order approving the program can be found at www.ncuc.net (Docket E-7, Sub 1043).

Site Selection Energy Report readers who valued former US Ambassador to Mexico Antonio Garza's perspective on Mexican energy reform in this September column will want to read what he thinks now that further steps forward have been taken.

PolitiFact looks into former governor and current gubernatorial candidate Charlie Crist’s statements about too little solar energy being produced in the Sunshine State.

McKinsey says the oil & gas industry can improve the delivery of major projects by adopting a modular approach successfully used by other industries.

ICF International has announced the findings of the study Modeling the Economic Impacts of AB 32 Auction Proceeds Investment Opportunities, which compare the economic impacts of different uses of proceeds from California's carbon emissions trading program under the state's 2006 climate law, AB 32. The law has the potential to generate significant auction proceeds once the cap expands in 2015 to cover transportation fuels. 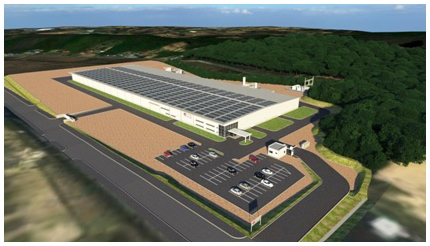 Japanese thin-film PV manufacturer Solar Frontier is to build its fourth CIGS module assembly plant in Japan with a nameplate capacity of 150MW. The $125-million plant (rendering below), in the village of Ohira, Miyagi Prefecture, in the north-eastern Tohoku region of Japan, is scheduled to begin production in March 2015 and will employ an estimated 100 workers. The company currently has three other factories in Japan, in Miyazaki Prefecture, in the south of the country.

The solar farm utilizes crystalline panels manufactured by Canadian Solar and a single-axis tracking system manufactured by Array Technologies that allows the panels to track the sun across the sky and increases the amount of electricity generated by each panel. In addition, the project includes inverters manufactured and tested by Phoenix-based Power One. Inverters convert electricity from direct current or DC (which is produced by the solar panels), to alternating current or AC (as it is used in homes and businesses).

Dominion Virginia Power has completed a study of a 119-acre site in eastern Goochland County and certified it as meeting all the requirements under the company's stringent Data Center Site Certification Program, which now has certified six sites.