A major wind power order is the latest reminder that Siemens in the United States is fulfilling demands for power generation and job creation all at once. 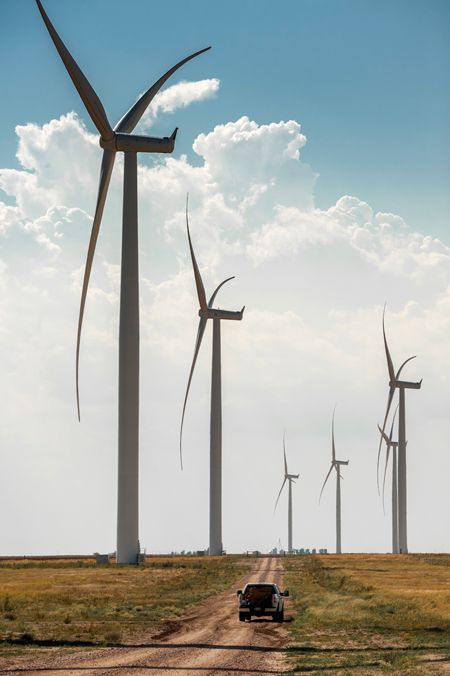 The mammoth profiles of wind turbines, long common across Germany and other European countries, are becoming more common in certain US states such as Iowa (pictured), whose total installed wind power capacity of 5,133 MW as of Oct. 31 was surpassed only by totals in California (5,587 MW) and Texas (12,214 MW).
Photo courtesy of Siemens
Y 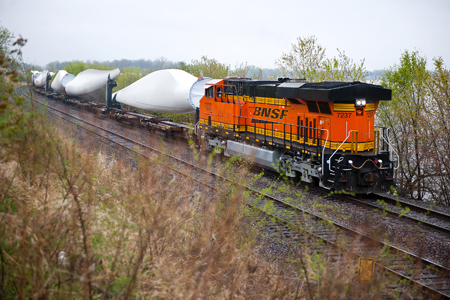 With three rotor blades on each MidAmerican Energy's 448 ordered wind turbines, a total of 1,344 blades will have to be delivered via truck or rail from Siemens' production site in Fort Madison, Iowa, to MidAmerican's latest five wind farm projects in the state. If you put all of those rotor blades in a row, they would span a distance of over 44 miles (71 kilometers).

ou can't turn around in Germany without seeing wind turbines, many of them now of the gearless variety, their three blades turning their faces to the breeze. Row after row, they cast long, dizzying shadows across the farm fields, having sprouted from the fertile growth medium of Germany's progressive energiewende policy, which seeks to take the country completely away from nuclear power and even further into renewables.

US energy policy, far from gearless, might be likened to a neglected internal combustion engine, always on the edge of having its pistons lock up permanently. But last-minute policy lubrication at least keeps some projects moving forward, as with the recent temporary renewal of the Production Tax Credit (PTC), which once again stands on the precipice of expiration at the end of this month. For wind, it comes to $0.023 per kilowatt-hour for projects that start construction by Dec. 31, 2013.

Warren Buffett's MidAmerican Energy beat the Christmas rush Dec. 16 by placing the largest single order for onshore wind power ever awarded globally, for 448 wind turbines with capacity of 1,050 megawatts, with German power giant Siemens. The order has been estimated to be worth approximately $1 billion.

The turbines will be deployed at five different wind farms hovering above the farm fields of Iowa, where around 24 percent of total power generation in the state was provided by wind power in 2012.

Siemens has already installed 1.2 GW of wind power capacity for MidAmerican Energy to date. Including this new order, these wind projects will provide around 660,000 American households with power when they are completed in 2015, says Siemens. The Dec. 16 order follows on a Dec. 2010 order from MidAmerican that at that time also was the largest to date, for 258 turbines.

The nacelles and hubs for the wind turbines will be assembled at the Siemens plant in Hutchinson, Kan., and the rotor blades will be produced by Siemens in Fort Madison, Iowa, where the purchase announcement was made Dec. 16. Combined, those two plants employ more than 800 people. According to MidAmerican, approximately 1,000 construction jobs will be added to Iowa’s economy during the two-year construction period for the new wind turbines, and approximately 40 new permanent jobs will be added when the expansion is complete.

The Siemens Energy Sector supplies products, services and solutions for power generation in thermal power plants and using renewables, power transmission in grids and for the extraction, processing and transport of oil and gas. On September 30, 2013, the Energy Sector had a work force of approximately 83,500 — down from 88,000 in 2010. But revenue, at €26.6 billion, was 1.1 billion higher in FY2013 than in FY2010. 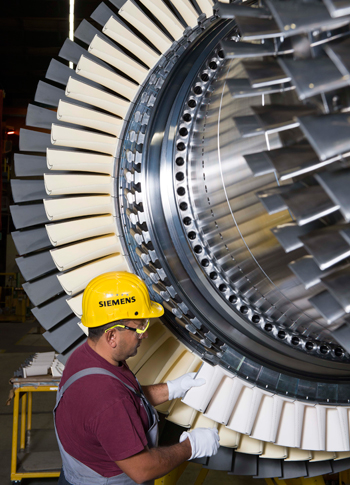 This picture shows the assembly of a Siemens SGT6-8000H gas turbine at its plant in Charlotte, N.C., which will supply turbines for two combined-cycle plants being built in Pennsylvania that will be fired by local shale gas.
Photo courtesy of Siemens

“We congratulate MidAmerican Energy on its leadership in renewable energy development in Iowa and the U.S. We are very excited that MidAmerican Energy has again selected us to partner with them on its latest wind expansion projects in Iowa, allowing us to continue to supply U.S.-made blades and nacelles,” said Mark Albenze, CEO of Siemens Energy’s Wind Power Americas business. “The size and magnitude of this order confirms wind power’s growing importance as part of a balanced energy mix in Iowa and the U.S.”

“When the new projects are completed in 2015, MidAmerican Energy and Siemens will have provided more than 2.2 gigawatts of clean, wind-generated electricity in Iowa since 2008,” said Bill Fehrman, president and CEO, MidAmerican Energy. “We look forward to working with Siemens over the next two years to construct five additional wind farms, which will have a major impact on Iowa’s economy and energy future.”

In 2012, wind energy was, for the first time ever, the No. 1 source of new electricity generation capacity. More wind power capacity was installed in the U.S. than any other form of power generation. Additionally, a record-setting $25 billion in private investment was added to the U.S. economy in new wind farm construction, making wind the top source of newly installed electric generating capacity, representing 42 percent of all new capacity. Since 2005, the wind industry has brought more than $105 billion of private investment into the economy.

“Iowa is a leader in wind generation, and I welcome the opportunity to expand renewable energy in our great state,” said Iowa Gov. Terry Branstad. “It is great to have an Iowa-based energy company placing the world’s largest onshore order for wind turbines in a facility that has produced more than 9,000 blades since the plant began operations in 2007. Together, these companies continue to greatly benefit Iowa’s economy and demonstrate the state’s commitment to renewable energy.”

The Fort Madison, Iowa, plant was built seven years ago on the site of a closed tractor-trailer manufacturing business, which, at its peak, had 250 employees. Since then, Siemens has invested more than $100 million to turn it into an advanced manufacturing facility. The factory put out its first blade in 2007, was expanded in 2008 and currently employs approximately 500 people.

Where Do We Go Now?

"This major order for 1,050 megawatts is evidence that the federal production tax credit continues to boost new job growth and economic investment in the U.S. while keeping electricity rates low and encouraging development of proven renewable energy projects," said a release from MidAmerican.

“Extending the production tax credit is critical to giving the wind industry the certainty needed to continue to make investments,” said Albenze. “These projects demonstrate that wind power is a viable and sustainable part of the U.S. energy mix. This industry has arrived. Let’s ensure it will thrive.”

But with prices having fallen, some say wind is now steady on its own two feet. According to a Bloomberg report, American Wind Energy Association CEO Tom Kiernan said at the announcement in Fort Madison, “If Congress were to remove all the subsidies from every energy source, the wind industry can compete on its own."

Wind is even competing with the vaunted US natural gas supplies, as many analysts expect both domestic demand and potential export via LNG pipelines to drive up the price of that gas in the next few years.

So Siemens continues to fire on the gas-fired power front as well: On Dec. 20 it announced it would be providing gas turbines for an 829-MW combined-cycle power plant in Lycoming County, Pa., that will be fired using local shale gas. Those turbines are made at the company's plant in Charlotte, N.C., where Siemens in 2010 announced a $170-million, 825-job expansion.

"We know the number one job for wind and renewables is to
make it more cost-competitive."
— Eric Spiegel, president and CEO, Siemens USA, Nov. 2, 2013

Offshore wind may be next for Siemens and others: Siemens is set to supply turbines for the Cape Wind project off the Massachusetts coast. And US Secretary of the Interior Sally Jewell announced this month the proposed notice of sale for nearly 80,000 acres offshore of Maryland for commercial wind energy leasing. Based on analysis prepared by the Department of Energy’s National Renewable Energy Laboratory, the Maryland Wind Energy Area, if fully developed, could support between 850 to 1,450 MW of commercial wind generation, enough electricity to power the equivalent of approximately 300,000 homes. 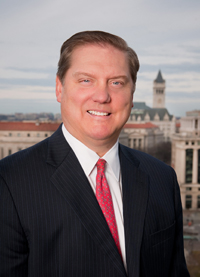 Eric Spiegel, president and CEO of Siemens USA, told the SelectUSA Summit audience in the nation's capital this fall that the natural gas situation in the US is "the single biggest manufacturing in the world today," but said wind power is becoming cost-competitive in some regions.

Speaking on a panel at the SelectUSA Investment Summit in Washington, D.C., this fall, Eric Spiegel, president and CEO of Siemens USA, said the company now has 130 manufacturing plants in the US. Site Selection's New Plant Database shows 36 facility investments from the company globally since Jan. 2010, 13 of them in the US, including a 50-job wind power services office in Orlando, Fla., inaugurated in Sept. 2013; a turbine manufacturing facility in Woodward, Okla., and a gear-making facility in Elgin, Ill.

Spiegel called the natural gas revolution "the single biggest manufacturing opportunity in the world today, with an estimated $110 billion being spent along the fracking, updating, midstream and downstream value chain, and that amount yet again planned for investment over the next 12 years.

"Yes, it's going to be good for the oil companies and the service companies," he said, "but the manufacturers as well. People will be building a lot of process plants to take advantage of this technology, and industry that is energy-intensive is going to be building in the US," especially, he said, when gas is three times as expensive in Europe and electricity is twice as expensive.

But he gave renewables their due.

"In years when there is a production tax credit in place, there is a lot of wind built, and there is a tax credit for solar as well," he noted. The price of gas is a bigger issue than the PTC, he said, "but in some parts of the country, wind power is now comparable to gas technology. We know the number one job for wind and renewables is to make it more cost-competitive."

Siemens has a $12-billion backlog in offshore wind orders around the world. "Wind technology still has a ways to go," said Spiegel. "A lot of big companies out there are getting serious about taking the cost down, and I think it's getting more competitive. We brought the price down by 40 percent over the last few years. We need to bring it down more. If you get gas prices up in the $5 to $6 range, you'll see renewables become more competitive."

Natural gas was priced at around $5.50 in mid-December.