Shot in the Arm

A €1-billion LNG terminal is altering the energy equation and construction employment for northern France and nearby Belgium. 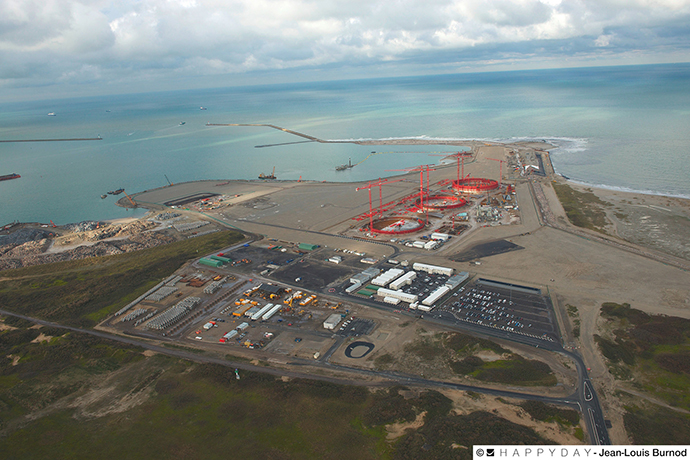 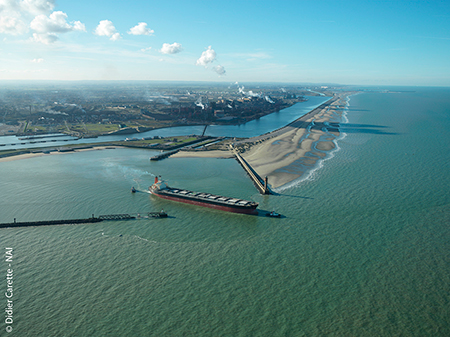 An ore carrier leave the Port of Dunkirk’s eastern outer harbor, just 90 minutes from the Strait of Dover. Behind it is the maritime dock. In the distance to the right are the jetties of the Western outer harbor.

Quick: Where is France's leading port for both ore and coal imports and containerized fruit?

Marseille? Le Havre? No, and no.

It's the Port of Dunkirk in northern France. Built in the 1970s, the port is only 25 km. (15.5 miles) from the Channel Tunnel, and is located well for connecting to the Benelux countries and northwestern Europe. The Port owns 17 km. (10.5 miles) of shoreline and 7,000 hectares (nearly 17,300 acres) of land. That includes 3,000 hectares (7,413 acres) available for new development. It's the leading manager of space in the Nord–Pas de Calais Region.

The latest big project taking place on some of that acreage is importing neither minerals nor fruit. It will bring in liquefied natural gas (LNG).

In October, the first stone was laid for Dunkirk's new LNG terminal, which is scheduled to begin operating at the end of 2015. It is the second largest industrial project in France, after the Flamanville nuclear reactor project. When complete, the terminal will be able to berth the largest LNG tankers in the world and store 13 billion cubic meters (more than 459 billion cu. ft.) of gas a year, corresponding to 20 percent of the annual consumption of natural gas in France and Belgium.

With its three liquefied natural gas storage tanks, the terminal will offer the network increased flexibility to supply gas-fired power stations which are able to meet peak electricity demands, especially in the winter months. EDF has opted to heat the liquefied natural gas using a zero-carbon method based partly on hot water discharged by the Gravelines nuclear plant, "thus ensuring that the terminal is at the forefront of energy efficiency developments."

The site is set to employ up to 1,200 people in the Dunkirk area during the terminal development phase between 2012 and 2015, and is projected to create around 160 direct and indirect jobs during the operating phase. The infrastructure will also help revitalize port traffic, said EDF last fall, with an expected increase of more than 7 percent."

"The Dunkirk LNG terminal strengthens the historical presence of EDF on the Dunkirk territory and contributes to the economic influence of the whole area," said Henri Proglio, EDF's chairman and CEO, in October. "This achievement, which is unique in being linked to two markets — France and Belgium — will play a major part in safeguarding and diversifying European gas supplies."

The port's total volume for all types of traffic was 47.22 million tons (MT) at the end of December. The port discontinued crude oil storage in 2012. But refined petroleum products rose by 7 percent.

"After an exceptional year in 2012 due to work on the LNG terminal, Dunkerque-Port's investment program returns to a more normal level in 2013, amounting to €51.3 million," said the port, with energy and bulks accounting for €20 million of that total.

There's more expansion in the works. November saw the Port of Dunkirk hold a grand opening for its bulk terminals, in particular to serve products derived from or intended for cement works. A Total refinery, which the global energy firm decided to close in 2010 to the mass displeasure of workers and residents, is being repurposed into "an industrial and technical facility with three new activities: a technical support center for refining operations, a training center for refining jobs and a logistics depot," says Total.

Meanwhile, early this year, the European Commission announced it was directing 1.1 million (US$1.5 million) toward a feasibility study for a separate LNG bunkering station that would be fed directly from the terminal now under construction.

"LNG is rapidly emerging as a cheaper and more environmentally friendly fuel for the maritime sector and its uptake is encouraged by the European Union," said a release from TEN-T, the EU's Trans-European Transport Network executive agency.

The same agency is funding yet another study of ways to improve connections between the port and France's national railway network. 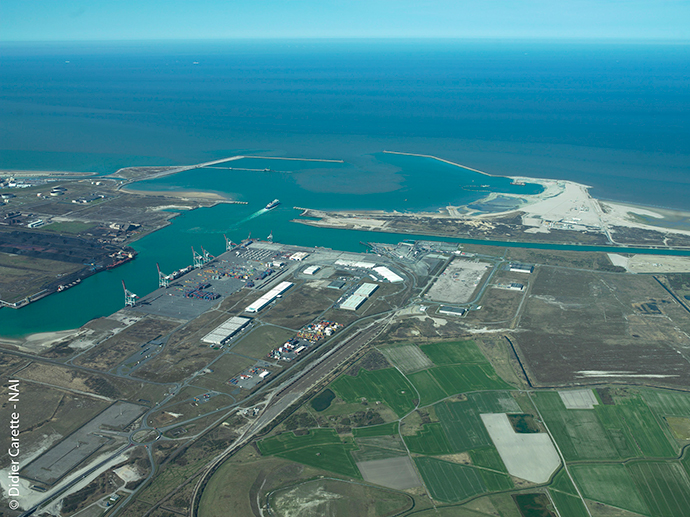 This pulled-back aerial places the LNG terminal project (upper right) within the context of the entire Port of Dunkirk complex. Left, the Western Bulk Quay is used for the reception and storage of ore and coal. On the right, the Flanders Terminal has 1,200 m. of quayside, five gantry cranes and 700 reefer sockets for containerized cargoes. In the center, warehouses of more than 120,000 sq. m. (1,291,711 sq. ft.) are already installed in the logistics area. Beyond the buildings, the RoRo Terminal offers 12 crossings every day between Dunkirk and Dover.