recent study conducted by NERA Economic Consulting and commissioned by the U.S. Department of Energy (DOE) found that expanding LNG exports leads to much greater economic expansion than limiting LNG exports. The U.S. Chamber of Commerce is clamoring for more LNG exports. But what really counts is when the companies step up to actually do it. In addition to multiple LNG liquefaction and export projects happening on the Gulf Coast (watch for the March 2013 issue of Site Selection for more), it’s happening on Elba Island near Savannah, Ga., where Shell US Gas & Power LLC (Shell), a subsidiary of Royal Dutch Shell plc, and Southern Liquefaction Company, LLC, a Kinder Morgan company and unit of El Paso Pipeline Partners, L.P., announced on Jan. 28 their intent to form a limited liability company to develop a natural gas liquefaction plant in two phases at Southern LNG Company, LLC’s existing Elba Island LNG Terminal, near Savannah, Ga.

“Kinder Morgan is delighted to be working with Shell at Elba Island on this project, which has already received Free Trade Agreement approval,” said Kinder Morgan Chairman and CEO Richard D. Kinder. “This project will facilitate further development of the abundant natural gas resources in the United States and will be a positive factor in the overall balance of trade between the U.S. and other countries.” Kinder added that the facility anticipates receiving non-Free Trade Agreement approval in due course.

“This announcement underscores how the abundance of natural gas in the U.S. is changing the energy landscape,” said Marvin Odum, president of Shell Oil Co. “With a measured, phased approach, exports of cleaner burning natural gas can help meet the world’s rising energy needs while also giving a boost to the U.S. economy.” 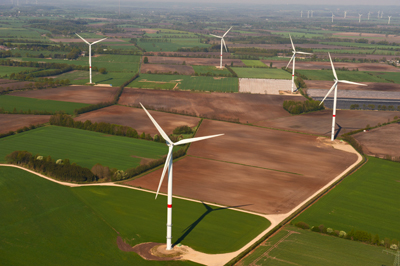 Nordex turbines like these will soon be rotating at two major wind farms in Uruguay.
Photo courtesy of Nordex SE

Nordex Americas this week announced two major wind farm projects in Uruguay that will result in the installation of 49 of the company’s N117/2400 2.4-MW turbines on 91-meter (ft.) towers. The first, about 100 km. (65 miles) from Montevideo, is being pursued with Akuo Energy, a firm Nordex has worked with in the past in France. The electricity produced by the project, enough to power 73,000 homes, will be deployed by Usinas y Trasmisiones Eléctricas (UTE), Uruguay’s state power company, under a 20-year power purchase agreement with Akuo.

Juan Negro, CEO of Akuo Energy Uruguay noted, “This is an exciting time for Uruguay. We are happy to play a role as the country moves forward with its plans to diversify its energy matrix and incorporate wind energy as its primary source of renewable energy.”

The second project, announced this morning, will be located at a site on the border with Brazil, a few miles from the city of Artigas, in the north of Uruguay, about 370 miles (600 km.) from Montevideo, the capital city. With 28 turbines, it will be the largest wind farm owned by UTE and represents the country’s commitment to the growth of renewable energy. Delivery of turbines is slated to begin in February 2014 with project completion in June 2014.

“We are honored that UTE has chosen Nordex and our technology for this important project. Uruguay’s first wind turbine was a Nordex N27/250 installed in 2000 for UTE as customer and still running successfully today,” said Ralf Sigrist, president and CEO of Nordex USA.

Gonzalo Casaravilla, president of UTE, said, “We are pleased to have reached this agreement with Nordex, a company known worldwide for its quality, capabilities and its dedication to wind energy. Their commitment to a renewable energy future matches our own.”

Yesterday “HERO” Solar (Hamilton Energy Resource Opportunities LLC) announced it has completed the interconnection study process and has signed and entered into an interconnect agreement with Progress Energy Florida for a 70-MW solar farm in Hamilton County, Fla. The project is supported by a $350,000 grant from the Hamilton County Development Authority.

HERO's Managing Director of Development, Jack Levine, said "We are grateful to Progress Energy and their Interconnect Team who has helped us every step of the way through Feasibility, System Impact and Facility Studies to insure FERC guidelines and utility requirements were met. We are delighted to have accomplished this impressive milestone and are excited about starting our construction build out. We look forward to continuing working with our partners at Progress Energy and commend their efforts to develop alternative fuel sources and provide economic development within their service areas."

Commenting on the status of Florida's solar economy and the start of construction, Levine added, “Right now there are regulatory barriers that do not allow us to recognize the added value of alternative energy and therefore have impeded the ability for the project to be adequately funded. As such, we are now beginning to look for and aggressively examine strategic alternatives that will allow us to get the project built. This project is ideal for the right tax equity partner or a company looking to expand their strategic footprint in the United States.”

Most recently, the EITF partnered with the Defense Logistics Agency-Energy in the release of a Request for Proposal (RFP) for a 15-MW solar photovoltaic (PV) project at Fort Detrick, Md., and for a 28-MW biomass plant at Fort Drum, N.Y. In addition, the EITF has positioned three other projects (Fort Bliss, Texas; Fort Irwin, Calif.; and Schofield Barracks, Hawaii) to be released as RFPs or EULs during 2013. “In total, these five projects represent a 10-fold increase in the Army's renewable energy deployment to date,” said an Army release, “and will move the Army 10 percent towards achieving its 1 GW goal.”

Think shale gas is only a big deal in the States? Last week Royal Dutch Shell came to a $10-billion agreement with Ukraine to drill for shale gas. Here’s a link to the official announcement and photos at the site of Ukraine’s Ministry of Energy, but you might need to brush up on your Ukrainian. Insights into the nation’s shale gas outlook can be found from Prime Minister Mykola Azarov’s administration here, here and here. 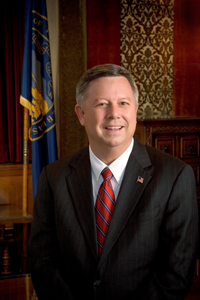 Nebraska Gov. Dave Heineman earlier this month approved a new route for the Keystone XL pipeline through his state.

On Jan. 22, Terry O'Sullivan, General President of LIUNA — the Laborers' International Union of North America — issued the following statement about Nebraska Gov. Dave Heineman's approval of a new route for the Keystone XL pipeline and the urgent need for final authorization of the jobs-creating pipeline project:

“Thank you, Governor Heineman, for completing the evaluation process of the new route for TransCanada's Keystone XL Pipeline project. Your approval removes one of the last barriers separating nearly 1 million unemployed U.S. construction workers from the tens of thousands of good jobs that will be created by this massive pipeline project. It is clear that this pipeline is in the national interest. I urge the State Department and the White House to move with all haste in completing the next steps in the authorization process. The Keystone pipeline will unlock thousands of good jobs for American workers and any further delay beyond the State Department's current schedule will only result in prolonged economic insecurity for thousands of Laborers who would otherwise be working.”

Interested in documents related to Keystone XL going back five years? The U.S. Department of State has made them available.

In December Hines and equity partner J.P. Morgan Asset Management announced that the 13-story, 415,000-sq.-ft. building under construction at La Jolla Commons in San Diego will become the nation’s largest carbon-neutral office building to date. The new building (see rendering) will achieve carbon neutrality on an annual basis through a combination of high-performance building design, directed biogas and on-site fuel cells made in California by Bloom Energy that annually will generate more electricity than the building and tenant will use.  “While there are other small net-zero buildings in the U.S.,” said the Hines release, “LPL Financial at La Jolla Commons will be the largest and most ambitious net-zero office building in the U.S. developed for lease.”

The building will be fully leased and occupied by LPL Financial, LLC. Construction began in April 2012 and completion is scheduled for mid-2014. The building design incorporates a highly efficient under-floor air system, advanced curtain wall materials and many other features that reduce the energy required to operate the building. The fuel cells, acquired from Bloom Energy, will generate approximately 5.0 million KWh of electricity annually.

It may seem like there are too many news outlets, but that just makes the truly valuable ones stand out all the more. One such standout coming to our attention is ElectricityPolicy.com. 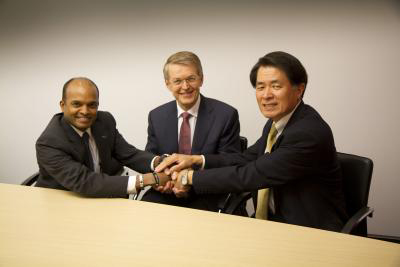 Daimler AG, Ford Motor Company and Nissan Motor Co., Ltd., have signed a three-way agreement to accelerate the commercialization of fuel cell electric vehicle (FCEV) technology. The goal of the collaboration is to jointly develop a common fuel cell electric vehicle system while reducing investment costs associated with the engineering of the technology. Each company will invest equally towards the project. The strategy to maximize design commonality, leverage volume and derive efficiencies through economies of scale will help to launch the world’s first affordable, mass-market FCEVs as early as 2017.

“Fuel cell electric vehicles are the obvious next step to complement today's battery electric vehicles as our industry embraces more sustainable transportation,” said Mitsuhiko Yamashita, member of the board of directors and executive vice president of Nissan Motor Co., Ltd., supervising research and development. “We look forward to a future where we can answer many customer needs by adding FCEVs on top of battery EVs within the zero-emission lineup.”

Engineering work on both the fuel cell stack and the fuel cell system will be done jointly by the three companies at several locations around the world. The partners are also studying the joint development of other FCEV components to generate even further synergies. 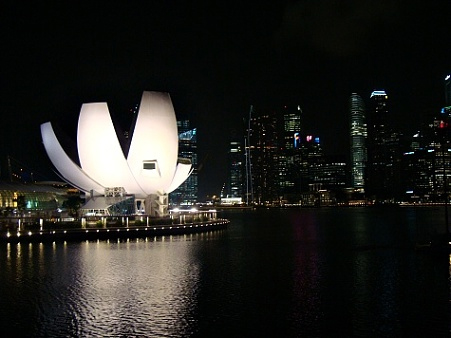 Azusa, Calif.-based Contour Energy Systems announced Jan. 24 the opening of its new R&D center in Singapore, located at Westpark Biz Central. Founded in 2007 out of the collaboration of Caltech and CNRS (the French National Center of Scientific Research), Contour Energy Systems is a next-generation battery company, pioneering breakthrough in fluorine-based battery chemistries, nano material science and advanced manufacturing processes. The company maintains another R&D center in Austin, Texas. This is its first facility outside the U.S.

“It is certainly an exciting time for both Contour Energy and Singapore as we embark on these disruptive technologies from which will spring new breakthroughs in the portable power industry,” said Ms. Chu Swee Yeok, president and CEO of edbi, the investment arm of Singapore’s Economic Development Board.