Rivers to Cross,
Bridges to Build 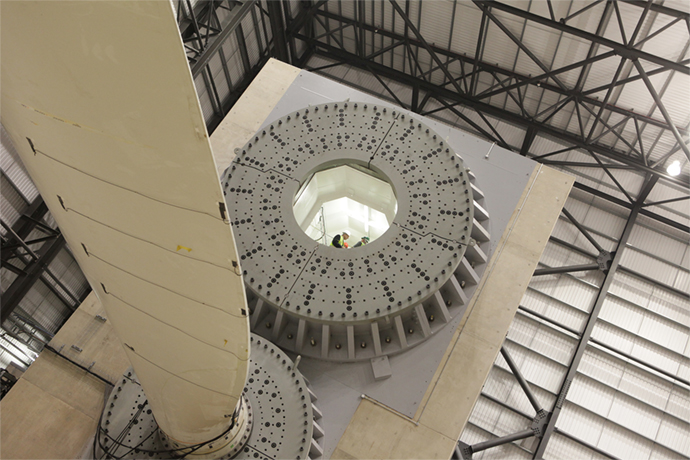 A blade is mounted to the hub inside the National Renewable Energy Centre’s blade test facility in Blyth, just north of Newcastle, UK.
Photo courtesy of Narec
by ADAM BRUNS
R 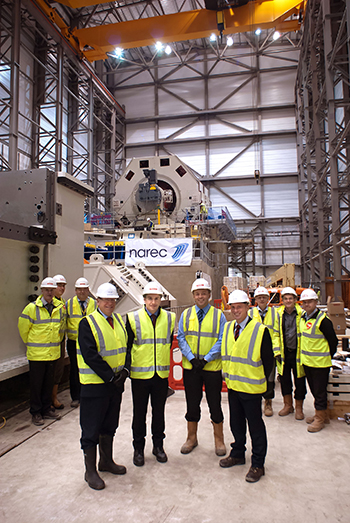 ivers by definition drive apart. But there's no shortage of examples where they've served to bring regions together. Think Cincinnati/Northern Kentucky, Greater Pittsburgh or Minneapolis-St. Paul.

The region has seen a marked uptick in projects related to offshore oil and gas and renewables over the past several years. It's a similar story just to the north in such locations as Aberdeen, Scotland. So, especially with Scotland's secession growing more inevitable every day, how do the areas compete or coalesce to maximize their opportunities?

Catherine Walker, inward investment director at NewcastleGateshead Initiative, says local companies pursuing global projects out of Newcastle "are always quite keen to point out that in Aberdeen it's around logistics — getting people out to the rigs. Newcastle is about innovation and technology, and design of materials going into the offshore industry."

The products range from umbilical lines being spooled out along the seabed to various turbines.

"All of those tend to be designed or manufactured in the Northeast," says Walker. In addition, she says, "We're finding a lot of companies are looking to open secondary offices in the Northeast because the talent is in very short supply in Aberdeen" and therefore comes at a steeper price. She points to Aberdeen-based Technip Offshore Wind's recent choice to pick Newcastle for a project and engineering center out of 18 possible candidate locations. The center is anticipated to host some 60 positions.

Helping make the Newcastle case are its three ports in Sunderland, Tyne and Blyth. Tyne handles cruise passengers and freight such as Nissan automobiles, and features a 65-hectare (160-acre) enterprise zone. Sunderland is home to a Nissan factory employing thousands, and is ramping up its commercial port activity. And Blyth is the home of the National Renewable Energy Centre, a testing facility whose very existence is geared toward renewable energy innovation, from wind to tidal and wave energy to other sectors.

"Some of their client base were in the north of England," says Walker, alluding to their own need to access talent in the form of project managers and design engineers.

Walker says some of the renewables activity has slowed as the UK government delays decisions on support commitments. But the area is primed to serve the sector once the activity is green-lighted. Among other attributes, NewcastleGateshead is the closest metro area to the largest wind farm planned for the North Sea, the 9-gigawatt Dogger Bank project from Forewind, a four-firm consortium comprising RWE, SSE, Statkraft and Statoil.

While the waiting goes on, however, nobody's standing around when it comes to serving the global subsea sector. Walker says more than 50 companies in the area employ about 10,000 people across the supply chain from NewcastleGateshead region, one of the largest subsea industry concentrations in the world, and serving deepwater projects all over the world.

"Dogger Bank will come online, so it's a ready market, but they're not reliant on that," she says. The area has capture more than £100 million (nearly $150 million) of new investment in the last two years alone involving such corporations as Wellstream, Duco Technip Offshore Wind and Bridon International, which recently established the world's most advanced wire rope manufacturing facility. Siemens' new £8-million ($12-million) training center in Newcastle is its most recent investment.

Ready Come What May

So how reliant are Northeast England and Scotland on each other economically? And what happens when Scotland splits off?

Duco Ltd., owned by Technip, operates a major underwater cable systems (umbilicals) factory on Walker Riverside in Newcastle, part of a huge cluster of subsea technology firms in the region that serve projects and clients at sites around the world. The company also operates a spoolbase for its umbilicals in Evanton, Scotland (below).
Photos courtesy of Technip/Duco

Walker admits it's difficult, "because we're the nearest location to them. Northumberland adjoins Scotland. There's a general view that through strong relationships it could actually benefit our economy. But we know Scotland is ultra-competitive around FDI particularly, and have always had the financial power to attract significant inward investment projects we've not been able to compete with. If anything, they'll have even greater power."

At the same time, she says, "it does give us opportunities. Companies could come to the Northeast and benefit from proximity to them."

Scotland attracted its highest level of global FDI projects in 15 years during 2012, strengthening its competitive positioning within the UK, according to Ernst & Young's latest annual attractiveness survey, released last week. "A total of 76 projects were recorded last year, a 49-percent increase on the 2011 figure of 51," said E&Y. "This compares to an increase of 3 percent in projects coming in to the UK as a whole during the same period and saw Scotland increase its market share of all UK FDI projects by almost 3.5 percentage points, rising from 7.5 percent to 10.9 percent."

One issue the E&Y report identifies as having little or no effect on levels of FDI is the current debate surrounding Scotland's constitutional future, saying there is no sign of investors being deterred from coming to the country.

"As new markets open up and competition for FDI intensifies, securing investment will become more difficult for all countries, including Scotland," said Jim Bishop, EY Scotland senior partner. "However, next year's referendum hasn't acted as a barrier to investment so far, although that may change as the discussion intensifies. What we can confidently say is that Scotland's voice is being heard all the more clearly by investors as things stand."

The limbo that accompanies any pending political decision plays into the Northeast's hands today:

"We've had anecdotal evidence where companies are choosing not to locate in Scotland at the moment because of the uncertainty," says Walker. But ultimately, she says, "irrespective of what happens, we are neighbors. The long-term aim will always be around building relationships with Scotland, not least in terms of logistics and distribution."

But large-scale energy and the movement of the large components it entails continue to be primary economic drivers. The city council recently committed to refurbishing the only hammerhead crane on the East of England coastline, a 325-ton behemoth with a 30-meter straight-lift capacity. The area has also dredged further up the river, freeing up nearly a mile of quayside deep water, and invested in heavy load-out pads as well as big structures to house operations serving such niches as umbilicals.

An energy academy established by Maersk and Advanced Industrial Solutions is expected to train some 2,000 people. And soon, in 2015, the area will open a new national marine test facility, a joint venture between the city council and Newcastle University that will features hyperbaric chambers and other technologies for testing the massive components headed offshore. The facility will be located in Neptune Yard on the north bank of the River Tyne. The North Bank of the River Tyne is a designated Enterprise Zone and has been identified by the Government as one of five Centres for Offshore Wind and Renewable Engineering (CORE) in England.

The Centre for Renewable Energy From Land (CREEL) is based at Newcastle University, a facility dedicated to researching a range of biomass sources for energy production. The world's largest offshore wind turbine has been developed in North East England. And as one of the UK's major deep sea ports, the Port of Tyne boasts Europe's largest biomass handling and storage facility.

Alongside those hard assets, says Walker, an open innovation network is also moving forward so that companies can pitch ideas, benchmark, have access to the business intelligence and get products to market much more quickly. Having the full gamut of resources will enable the area to attract the full gamut of facility types, from HQs to manufacturing to R&D.

"Infrastructure is a key part of it," she says. "We know as a city that the offshore sector has the potential to create about 10,000 jobs for us. We have to have the infrastructure to be able to achieve the job growth."

Narec most recently welcomed a June announcement by Samsung Heavy Industries that it would test a heavy-duty drive train for one of its offshore wind turbines at Narec's new $71-million facility.

"Britain has a real chance to lead the world in the offshore wind sector and is being supported by Government," said UK Business and Energy Minister Michael Fallon. "Samsung Heavy Industries' decision to undertake the testing of its new multi-megawatt offshore wind turbine at Narec's pioneering test facility proves the benefits the facility can offer industry and demonstrates the opportunity for growth and jobs in the offshore sector."

The Energy Technologies Institute (ETI) is investing £25m in the Narec facility through the design, development, supplying and commissioning of the test rig by GE Energy-Power Conversion and MTS Systems Corporation.

"The confirmation of the Samsung Heavy Industries contract is a massive boost for both Narec and the UK Offshore Wind industry as a whole," said David Clarke, CEO of the Energy Technologies Institute. "It is evidence that the UK can create world leading engineering facilities for advancing technology innovation, which are attracting major industry operators and provide a welcome economic stimulus in a growing business sector."

Look for more coverage of the UK business climate in the September 2013 print issue of Site Selection magazine. 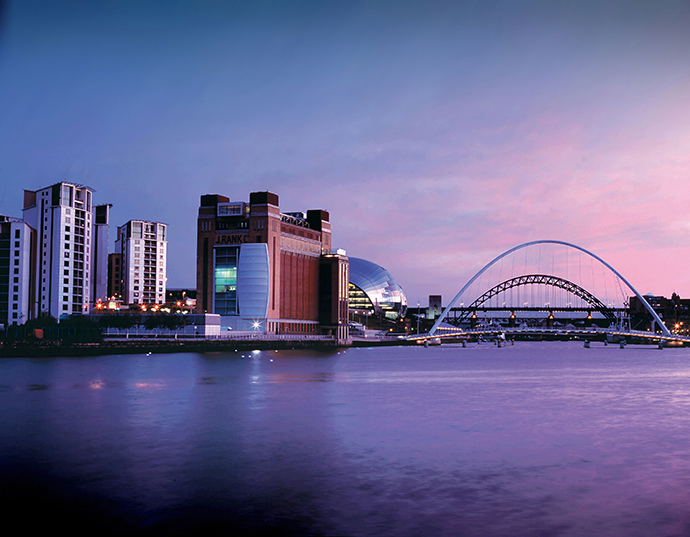