Race to the Starting Line 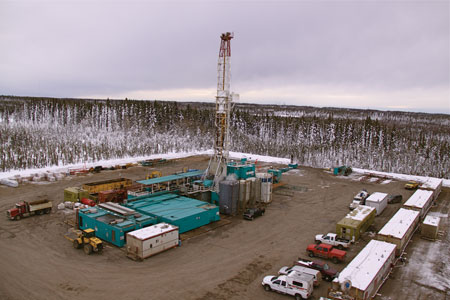 An Encana rig at work near Fort Nelson, B.C. This region of northeastern British Columbia expected to produce the lion's share of natural gas destined for several LNG export terminals on the B.C. coast. Encana sold its interest in Kitimat LNG to Chevron in December, but reiterated its support for LNG exports as "vital to diversifying markets for North American natural gas."
Photo courtesy of Encana

ay "Petronas" out loud and most people will think you're talking about Harry Potter's animal spirit ("patronus"), which has helped him out of any number of tight situations.

In the non-wizarding world, Petronas (formally known as Petroliam Nasional Bhd.) is the giant oil and gas company owned by the Malaysian government. But it's doing its best to wave a magic wand over a number of projects, led by a proposed Canadian LNG export facility on Lelu Island in Port Edward, B.C. 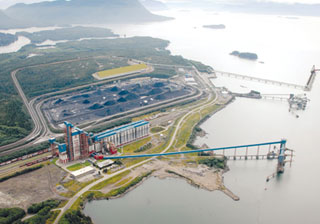 The Ridley Island area of the Port of Prince Rupert will be home to a number of new terminal projects for multiple commodities.

On July 5, Pacific NorthWest LNG (90-percent owned by Petronas and 10-percent owned by JAPEX [Japan Petroleum Exploration Co.]), applied to Canada's National Energy Board for a license to export up to 19.68 million metric tons of LNG per year for 25 years beginning in 2019.

"Today's filing for an NEB export license is another important step to bring this tremendous opportunity to reality. We believe the successful completion of our project will create long-term, multi-generational benefits for First Nations, northwest BC, the province and the country as a whole," said Greg Kist, president of Pacific NorthWest LNG. "While we continue our work to reach a final investment decision in late 2014, we believe that our project has all of the key components of a successful, world-class LNG development."

The proposed facility represents an investment of $9 billion to $11 billion, and will create up to 3,500 direct jobs during construction. Once operational, the LNG facility will create 200 to 300 permanent, full-time jobs. The facility is expected to operate in the community for over 20 years, says the company.

"Pacific NorthWest LNG's export application is more welcome news, which will help us achieve our goal to be a leader in clean energy supply and export," said B.C. Premier Christy Clark. "Our ability to reach new markets will enable British Columbia's natural gas to create new jobs, strengthen our economy, and lead to a debt-free future."

A separate pipeline project from TransCanada to supply the gas to the LNG trains will bring a $5-billion investment. It would be constructed by TransCanada, the firm behind the Keystone XL pipeline project still under review by the U.S. government. The primary source of the gas is the North Montney formation in northeastern B.C., where JAPEX in April acquired a 10-percent interest in Progress Energy Canada's assets there at the same time it acquired the interest in the export facility.

Based on past experience, TransCanada estimates the creation of up to 5,500 construction related jobs over a four-year period, bringing total estimated construction jobs for the two related projects to 9,000 total.

It's the second major proposed West Coast natural gas pipeline project for TransCanada, after the previously announced Coastal GasLink Pipeline project for Shell and its partners, which will carry natural gas from the same region of northeastern B.C. to an export facility under development in Kitimat, B.C. Another major export terminal project is on the drawing boards from Chevron and partners.

According to a June community presentation by Pacific NorthWest, B.C.'s natural gas sector has seen $27 billion invested between 2009 and 2013, compared to $1.8 billion in 2000.

In May, Pacific NorthWest awarded Front-End Engineering and Design ("FEED") contracts related to the project to Bechtel, a KBR/JGC joint venture, and a Technip/Samsung Engineering/China Huanqiu joint venture. Pacific NorthWest plans to recruit and hire up to 30 Canadian engineers who will be temporarily embedded with the FEED contractors over the next one to two years.

The District of Port Edward is located near Prince Rupert, B.C., where export of container and bulk cargo has ramped up dramatically over the past decade, helped by infrastructure investments from CN and others. A June 2013 year-to-date traffic summary showed a major increase in shipments of 45-foot containers, barley, canola and petroleum coke.

In March, a groundbreaking marked the start of construction of the port's $90-million "Road, Rail and Utility Corridor" project, which the port said "will support billions in new terminal developments and boost Canada's trade capacity and exports to fast-growing Asia-Pacific markets."

The project includes construction of five parallel rail tracks, a two-lane roadway, and a port-owned power distribution system along an 8-km. (-mile) corridor. The corridor will provide shared-use infrastructure for proposed potash, liquefied natural gas (LNG) and other terminals on the island. The first phase of the project will be completed in December 2014.

"The Government of Canada is focused on creating jobs, growth and long-term prosperity and this project is one of many under our Asia-Pacific Gateway initiative that delivers on this goal," said Ms. Wai Young, Member of Parliament for Vancouver South and Co-Chair of the Canada-China Legislative Association, on behalf of the Honourable Ed Fast, Minister of International Trade and Minister for the Asia-Pacific Gateway. "The development potential of Ridley Island is good news not only for the community of Prince Rupert but for all Canadians as we continue to open new markets to increase our exports to fast-growing Asian markets."

The Port Authority's Gateway 20/20 Plan foresees reaching an annual throughput capacity of 100m metric tons of cargo as proposed terminal developments are completed. The $90-million utility corridor is being funded jointly by the Governments of Canada and British Columbia, which have each contributed $15 million, and CN and the Port Authority, which have each committed $30 million.

Look for more coverage of Canada in the September 2013 issue of Site Selection, featuring our annual report on Canada's Best Locations. 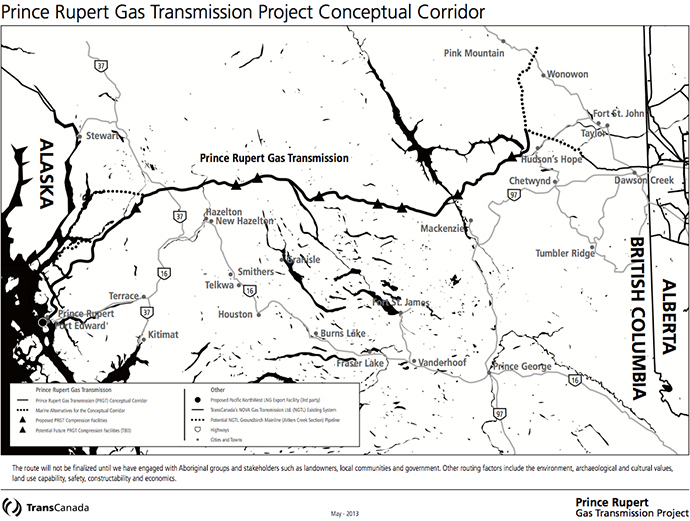 TransCanada PipeLines Limited has been selected to design, build, own and operate the proposed $5-billion Prince Rupert Gas Transmission Project, a new 750-km. (466-mile) natural gas pipeline from northeast BC to Lelu Island. The estimated in-service date for the pipeline is the end of 2018, subject to regulatory approvals.