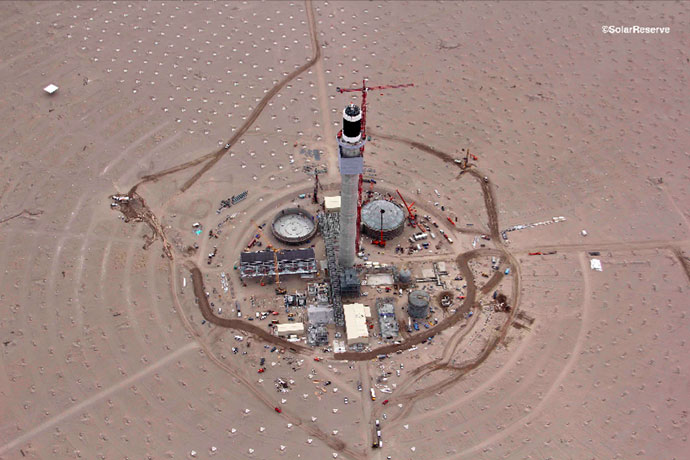 SolarReserve, the Santa Monica, Calif.-based developer of large-scale solar power projects, in April announced completion of the assembly of the molten salt receiver panels that sit on top of the 540-ft. solar power tower for its 110-megawatt (MW) Crescent Dunes Solar Energy Plant located near Tonopah, Nev. The Crescent Dunes Plant will be the nation's first commercial-scale solar power tower facility with energy storage and the largest power plant of its kind in the world.

"With more than 450 construction workers currently on site, the project is on course to bring American innovation to fruition," said Kevin Smith, CEO of SolarReserve. "The energy storage capability of this technology solves the problem of intermittency typical of other renewable energy sources. Additionally, because of it high efficiency, this technology can generate almost twice as much energy as a comparably sized solar facility, including facilities powered by photovoltaic panels or by a direct steam tower."

The Crescent Dunes project has secured a 25-year power purchase agreement with NV Energy to sell 100 percent of the electricity output of the facility to serve homes across Nevada. Construction is expected to peak at more than 600 jobs on site during the 30-month construction period and is estimated to create more than 4,300 direct, indirect and induced jobs at companies throughout the U.S. that provide engineering, equipment supply and manufacturing, transportation and other value-added services.

Watch for more coverage of other SolarReserve projects around the world in the July edition of The Site Selection Energy Report.

European Commission President Jose Manuel Barroso had energy markets and infrastructure on his mind in the run-up to the late May meeting of the European Council. But that's all in the past this week as the European Commission announced tariffs on imports from Chinese solar companies. Seeking to avoid European import tariffs like other Chinese companies, Chinese polysilicon and wafer manufacturer GCL-Poly, profiled in these pages two years ago, is looking to establish production in Taiwan, according to this report by South China Morning Post.

A U.S. Geological Survey news release calls attention to newly available maps depicting Southwestern Wyoming's enormous energy potential across the full range of resources. And an April 30 release updates the USGS's oil and gas resource assessment for the Bakken Formation and a new assessment for the Three Forks Formation in North Dakota, South Dakota and Montana. The assessments found that the formations contain an estimated mean of 7.4 billion barrels (BBO) of undiscovered, technically recoverable oil. The updated assessment for the Bakken and Three Forks represents a twofold increase over a 2008 assessment that estimated only the Bakken's mean resource, at 3.65 BBO. 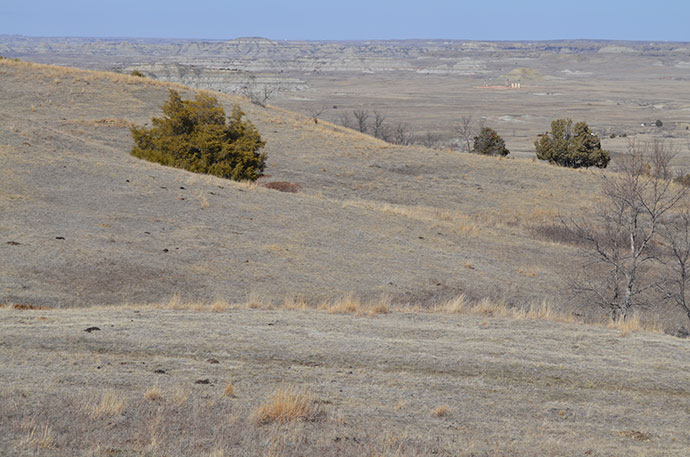 A view of the badlands terrain with Bakken oil and gas production pads in the distance, Billings County, N.D.
Photo by David Ferderer, USGS, 2013

"Since the 2008 USGS assessment, more than 4,000 wells have been drilled in the Williston Basin, providing updated subsurface geologic data," said USGS. "Previously, very little data existed on the Three Forks Formation and it was generally thought to be unproductive. However, new drilling resulted in a new understanding of the reservoir and its resource potential. In addition to oil, these two formations are estimated to contain a mean of 6.7 trillion cubic feet of undiscovered, technically recoverable natural gas and 0.53 billion barrels of undiscovered, technically recoverable natural gas liquids."

Among other aspects of an omnibus energy bill signed into law by Minnesota Gov. Mark Dayton in late May was a requirement that utilities get at least 1.5 percent of their power from solar energy. The overall measure is expertly summarized here by law firm Stoel Rives. 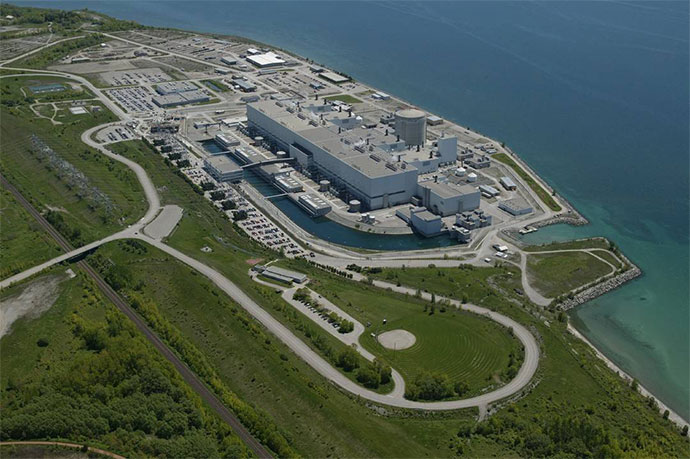 The $10-billion, 10-year refurbishment of Darlington Nuclear Generating Station in Ontario (pictured) is creating opportunity for the approximately 26 organizations in the nuclear power supply chain in Peterborough and throughout the greater region, say the city's economic development leaders, who recently visited London, UK, to explore that country's planning for 10 new reactors to be constructed starting in 2015.

Meanwhile, last week, the Ottawa-based Canadian Wind Energy Association (CanWEA) welcomed the Ontario Minister of Energy's continued commitment to a clean energy future and a growing role for communities as the province continues to modernize its electricity system. Minister Bob Chiarelli also announced the current Feed-in-Tariff (FiT) program for large renewable projects will be replaced by a competitive procurement process.

"Ontario's progressive approach to renewable energy development has successfully attracted billions in new investment and helped revitalize the manufacturing sector and wind energy is now a very cost-competitive source of clean, renewable electricity generation," said Robert Hornung, president of CanWEA, which also just released "WindVision 2025: A Strategy For Alberta," a report that asserts the western province "has about 5,000 MW of easily accessible wind resources that can produce energy at a more affordable cost than virtually any other form of electricity generation available today. However, the structure of the province's current competitive electricity market makes it very difficult for new wind farms to be financeable and to secure the revenues needed to be economically viable." CanWEA's recommendations? Imposition of a clean electricity standard and an increase in the price of carbon from large emitters.

Energy Fuels Resources wants to reopen its Canyon Mine near Grand Canyon National Park. But the U.S. Dept. of the Interior imposed a 20-year federal ban on new uranium mining just last year. Arizona Republic reporter Brandon Loomis gets to the heart of the matter. 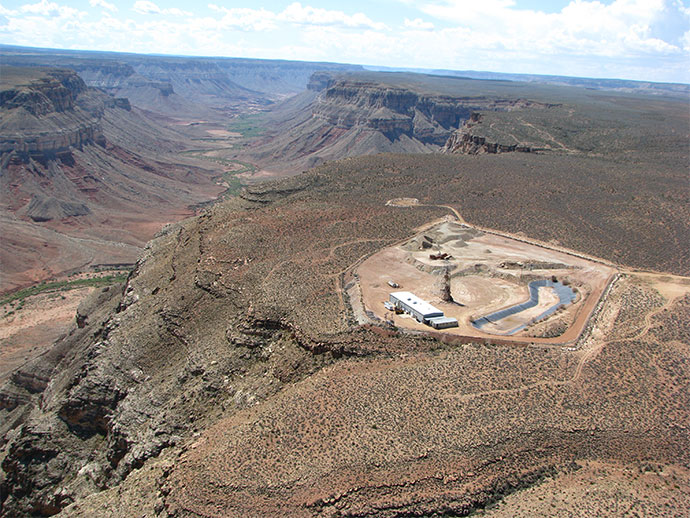 The Kanab North uranium mine is one of several that Denison Mines put into limbo some 20 years ago but has not remediated because of the possibility of reopening.
Photo courtesy of USGS

Among the groups welcoming the confirmation of Dr. Ernest Moniz as the new US Secretary of Energy was the Cyprus-U.S. Chamber of Commerce. "Our American Hellenic communities are thrilled that Democrats and Republicans joined together Thursday in a unanimous sweeping 97-0 vote to confirm Dr. Moniz as Energy Secretary," said Vassos Vassiliou, president of the Cyprus-US Chamber of Commerce, on May 21. "Secretary Moniz is a world-class scientist who understands the energy revolution underway in the United States and the rest of the world."

Moniz was awarded the highest honor of the Republic of Cyprus, the Grand Cross of the order of Archbishop Makarios III, for his contributions in establishing the Cyprus Institute and developing the research and educational sectors in Cyprus. "Secretary Moniz will make important decisions that will shape the global energy and climate landscape for decades to come, and we look forward to working closely with him to help properly develop the massive natural gas reserves recently discovered offshore Cyprus and, its friendly neighbor, Israel," said the Chamber's prepared statement. "The significant natural gas reserves recently found offshore Cyprus create great prospects and pave the way for long term economic development from which both the present and future generations of Cypriots, and citizens of neighboring countries will benefit, and that the United States Department of Energy and U.S. companies, like Noble Energy who have made significant exploration investments in Cyprus, will play a key role in the global natural gas market."

Way down at the other end of the Mississippi River, oil and gas production and construction services firm Danos, based in Larose, has picked a site in Gray, La., in Terrebonne Parish, for a new $10-million HQ. Danos also is evaluating multiple Louisiana port locations to select where it expects to invest $20 million in a new manufacturing and fabrication facility.

"With 1,100 employees based in Louisiana or working in offshore Gulf of Mexico operations linked with the company's Louisiana base, Danos is one of the major economic drivers in Louisiana's Bayou Region and a key contributor to global energy solutions, with 1,600 employees worldwide," said Louisiana Gov. Bobby Jindal on May 21. "We are thrilled to retain the company's headquarters in Louisiana after an extensive site selection eliminated Alabama, Mississippi and even Texas from consideration."

Construction of the headquarters facility will begin by late summer, with the manufacturing site to be selected within three months and construction of that facility to begin before the end of 2013.

Disparity in useful energy data is just one of several information gaps that must be bridged as the United States transitions towards residences that generate as much energy as they use over the course of a year — so-called "net-zero" houses. Gaps — and strategies to overcome them — are summarized in "Strategies to Achieve Net-Zero Energy Homes: A Framework for Future Guidelines," a new publication from the National Institute of Standards and Technology (NIST) based on the discussions at a 2011 workshop convened by the agency. One such strategy, proffered by experts who attended the workshop, is to require that energy costs be listed in all real-estate transactions. 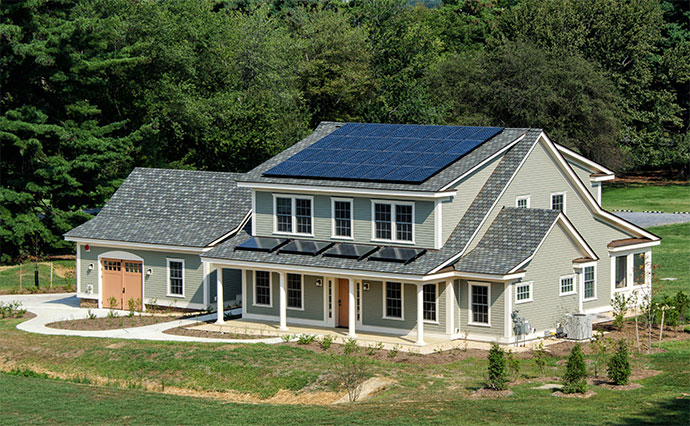 The Net-Zero Energy Residential Test Facility sits on the campus of the National Institute of Standards and Technology in Gaithersburg, Md. The facility allows researchers to test various high-efficiency and alternative energy systems, materials, and designs.
Photo courtesy of Young/NIST

E-mail your comments or inquiries directly to editor@conway.com