Highlights from Sally Jewell's first two months in office may have business leaders shaking their heads up and down instead of back and forth. 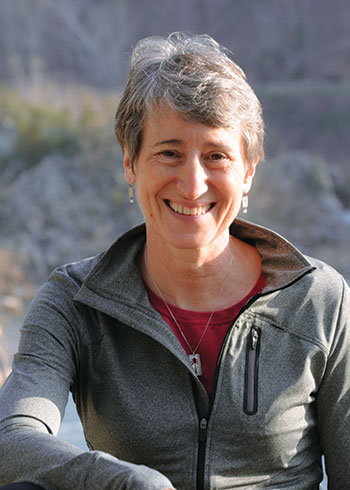 Former REI President and CEO Sally Jewell was sworn in as the 51st U.S. Secretary of the Interior on April 12.
Photos courtesy of DOI
by ADAM BRUNS
C

ompanies involved in all aspects of traditional or renewable energy development are seeing a lot of action from the US Dept. of the Interior since former REI President and CEO Sally Jewell was sworn in as its new Secretary in April.

Before joining REI, Jewell spent 19 years as a commercial banker, first as an energy and natural resources expert and later working with a diverse array of businesses. Trained as a petroleum engineer, Jewell started her career with Mobil Oil Corp. in the oil and gas fields of Oklahoma and the exploration and production office in Denver, Colo.

During her 54-day-old tenure at DOI, the following events already have transpired:

"This is history in the making as we mark yet another major milestone in the President's all-of-the-above energy strategy," said Secretary Jewell. "Today we are moving closer to tapping into the enormous potential offered by offshore wind to create jobs, increase our sustainability, and strengthen our nation's competitiveness in this new energy frontier. As we experience record domestic oil and gas development, we are also working to ensure that America leads the world in developing the energy of the future."

As part of the "Smart from the Start" program for expediting commercial-scale wind energy on the federal OCS that was announced in November 2010, DOI has identified Wind Energy Areas (including the area scheduled for this auction) to spur responsible development of this abundant renewable resource. A key precursor to the auction announcement was a revised environmental assessment that resulted in the issuance of a Finding of No Significant Impact by BOEM.

Jewell announced the approval of three major renewable energy projects that, when built, are expected to deliver up to 520 megawatts to the electricity grid.

Pictured left are water storage tanks at a drill pad in the Fayetteville Shale in Arkansas. Water is pumped from an impoundment into these tanks, which supply the hydraulic fracturing operation. At right is a typical drill pad in the Marcellus Shale gas play of southwestern Pennsylvania. A revised DOI proposal for fracking safety standards was released in May that increases flexibility for oil and gas operators.
Photos by Bill Cunningham and Doug Duncan, USGS

Since 2009 Interior has approved 25 utility-scale solar facilities, 9 wind farms and 11 geothermal plants, with associated transmission corridors and infrastructure to connect to established power grids. When built, these projects could provide more than 12,500 megawatts of power, or enough electricity to power more than 4.4 million homes, and support an estimated 17,000 construction and operations jobs.

Interior's Bureau of Land Management (BLM) has identified an additional 15 active renewable energy proposals slated for review this year and next.

The Midland Solar Project is a 350-MW solar photovoltaic facility. Proposed by Boulder Solar Power, LLC, the project will be built on private lands about 7 miles southwest from Boulder City, Nev., and will cross 76 acres of federal transmission corridor.

The New York Canyon Geothermal Project and electrical transmission facility will be built on 15,135 acres of land managed by the BLM about 25 miles east of Lovelock, Nev., in Pershing County. TGP Dixie Development Company, LLC, a subsidiary of TerraGen Power, LLC, will build the 70-megawatt project and associated 230-kilovolt electrical line.

Jewell signed a Declaration of Cooperation with the States of Oregon and Washington to expedite the review and permitting of energy generation, power transmission and other vital infrastructure development in the Pacific Northwest.

"By cutting red tape, expanding information technology tools and conducting concurrent state and federal reviews, we can trim months, if not years, off the time it takes to review and approve projects," said Jewell.

The agreement formally establishes a pilot Pacific Northwest Regional Infrastructure Team to more efficiently coordinate the permitting processes for infrastructure projects where both state and federal agencies have review responsibilities.

At the federal level, on May 17, 2013, a Presidential Memorandum established a permitting initiative to serve as a mechanism to cut timelines in half for major infrastructure projects while creating incentives for better outcomes for communities and the environment.

Based on a successful partnership model deployed in California, the state-federal team will use a cross-agency and cross-jurisdictional strategy to identify siting conflicts and mitigation early in the development and permitting process.

"Our public lands are huge economic engines for the nation. From energy development to tourism and outdoor recreation, our lands and waters power our economy and create jobs. I look forward to working with you all to ensure that we are managing our public lands wisely and sustainably so that their multiple uses are available for the generations to come."
— Sally Jewell, U.S. Secretary of the Interior, April 15, 2013

"Pacific Northwest States have already taken a number of steps to spur infrastructure investment and expedite their permitting processes," noted DOI, including Oregon Gov. John Kitzhaber's executive orders establishing the Oregon Solutions Network and life-cycle cost evaluation by state agencies, and his 10-Year Energy Action Plan. In Washington, reform and modernization of permitting and regulatory procedures is front and center, while the state hopes to continue capitalizing on its historically affordable power costs due to a pronounced hydropower advantage.

Washington is also where Jewell led Seattle-based REI for eight years as CEO and five years as COO, nurturing the co-op's growth to nearly $2 billion in annual sales in tandem with a pronounced emphasis on stewardship. "Speaking on behalf of REI's board and staff, we thank Sally for her 17 years of service to the co-op and wish her all the best with her new adventure in the ‘other Washington,' " said Interim CEO Brian Unmacht on her confirmation as Secretary. "As she did at REI, Sally Jewell will lead the Interior department with integrity, balance and wisdom."

"Approximately 90 percent of wells drilled on Federal and Indian lands use hydraulic fracturing, but the Bureau of Land Management's (BLM) current regulations governing hydraulic fracturing operations on public lands are more than 30 years old and were not written to address modern hydraulic fracturing activities," the department said. The updated draft proposal maintains the three main components of the initial proposal: requiring operators to disclose the chemicals they use in fracturing activities on public lands; improving assurances of well-bore integrity to verify that fluids used during fracturing operations are not contaminating groundwater; and confirming that oil and gas operators have a water management plan in place for handling fluids that flow back to the surface. 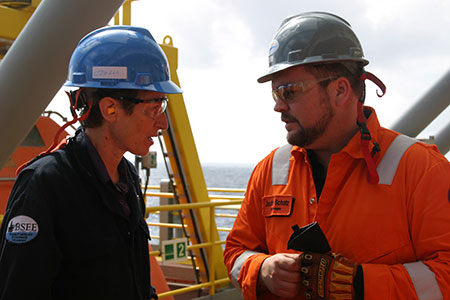 Sec. Jewell, who started her career with Mobil Oil and was trained as a petroleum engineer, visits ENSCO's 8502 rig in the Gulf of Mexico.

A supplemental proposal revises the array of tools operators may use to show that water is being protected, and provides more guidance on trade secret disclosure, while providing additional flexibility for meeting these objectives. While the revised draft seeks to establish baseline environmental safeguards across all public and Indian lands, it also complements efforts of several states that are regulating hydraulic fracturing, including Colorado, Wyoming, North Dakota, and Texas. The proposal includes a variance process that allows for deferring to states and tribes that already have standards in place that meet or exceed those proposed by this rule.

Jewell visited an offshore drilling rig and production platform in the Gulf of Mexico, capping a two-day visit to the Department's regional offices that oversee oil and gas development in federal waters. She dropped in on LLOG's drilling operations onboard the ENSCO 8502 rig, approximately 120 miles southeast of New Orleans, and also Chevron's deepest producing facility in 6,500 feet water depth, a semi-submersible platform approximately 125 miles southeast of New Orleans.

"Oil and gas production from the Gulf of Mexico plays an important role in powering our nation and strengthening our economy," said Jewell. "The Department of the Interior will continue to work with industry to ensure that these resources are developed safely and responsibly, while also delivering a fair return to the American taxpayer, businesses and communities."

The Gulf of Mexico contributes about 25 percent of U.S. domestic oil and 11 percent of domestic gas production, providing the bulk of the $12.2 billion in revenue from energy production that Interior distributed last year. In 2012, Interior approved 112 new deepwater well permits in the Gulf , the most since 2005, and more rigs are now operating there than before the Deepwater Horizon oil spill.

Under Interior's new five-year program for offshore leasing, more than 75 percent of the total undiscovered, technically recoverable oil and gas resources estimated on the OCS were made available for exploration and development. Fifteen potential lease sales are scheduled for the 2012-2017 period, including 12 in the Gulf and three off the coasts of Alaska.