The electric vehicle ecosystem is not allowing a few bad headlines to inhibit growth. 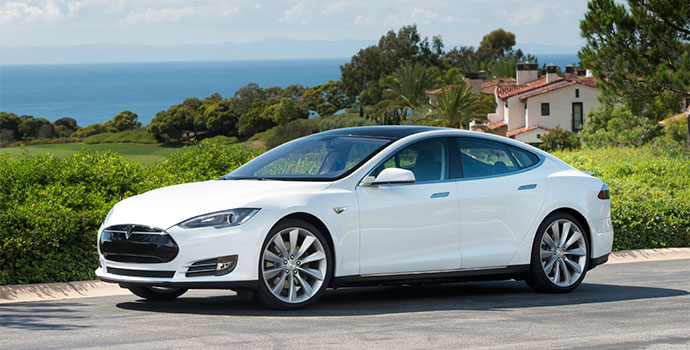 The Tesla Model S will soon be able to "supercharge" in a lot more places.
Photo courtesy of Tesla
by ADAM BRUNS
F 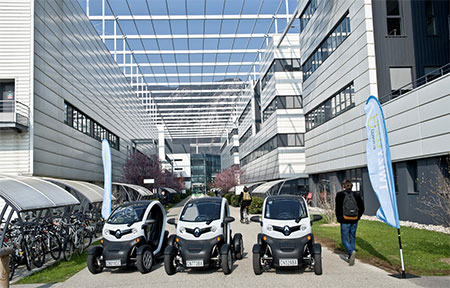 The French atomic energy agency's (CEA) Grenoble facility is the first of its kind to adopt the Twizy Way by Renault car-sharing service.
Photo by Alain Rico courtesy of Renault

isker Automotive is in bankruptcy. Coda Automotive's story has reached its own concluding passage. And Better Place's vision for an electric car network has gone to a better place.

If you didn't know any better, you might think electric vehicles are over before they started. But for every sapped battery there's at least one other venture charging toward the future.

Massachusetts-based BCC Research in February forecast that the hybrid and plug-in EV battery marketplace would grow in value from $4 billion in 2012 to more than $5.2 billion by 2017. And, as The Wall Street Journal reported in May, a deft blend of rebates, tax breaks and sheer savings can result in a net gain by consumers who might initially balk at EVs' higher price tags.

According to a chart maintained by the National Conference of State Legislatures and last updated in April, 27 states and D.C. have EV incentives for individuals, and 13 states currently have pending legislation relating to incentives. The US Dept. of Energy Alternative Fuels Data Center, meanwhile, shows 329 different incentives for EVs, 185 for hybrids and plug-ins, and another 53 for neighborhood EVs (i.e. those designed to travel below 35 mph). Their list includes 34 federal incentives.

The California Center for Sustainable Energy in December reported a steady increase in applications for EV rebates as 2012 closed, with nearly 2,000 in October, the highest monthly total in the rebate program's three-year history. The state accounts for some 25 percent of EV sales nationwide.

Overseas, Renault, for one, is not going to let the failed Better Place joint venture hold it back from progress on several fronts.

"The Renault network in Israel and in Denmark will continue to provide after-sales servicing for Fluence Z.E. and these vehicles' batteries," said the company on May 27 following the decision to fold by the Better Place board of directors. "Electric vehicles are a revolution in mobility. Renault is exploring all the charging technologies from quick drop to several alternatives. This decision does not at all call into question the electric vehicle strategy of the Renault-Nissan Alliance. The Alliance is the world leader in terms of electric vehicles, and the volumes of Renault's EVs continue to progress month after month."

Renault and Better Place, partners since January 2008, announced earlier in May that customers of Renault's Fluence Z.E. EV have covered more than 11 million "electric" kilometers (more than 6.8 million miles) around Israel since the vehicle launch in January 2012.

The Tesla Supercharger network has enabled an estimated 1 million miles of driving since going live in October 2012. Three days after Better Place's announcement, Tesla Motors revealed an expansion of that "Supercharger" charging network. Tesla has delivered more than 10,000 EVs to customers in 31 countries. The expansion builds upon the success of the Tesla Supercharger network that covers California and Nevada on the West Coast and the Washington, D.C., to Boston region on the East Coast. 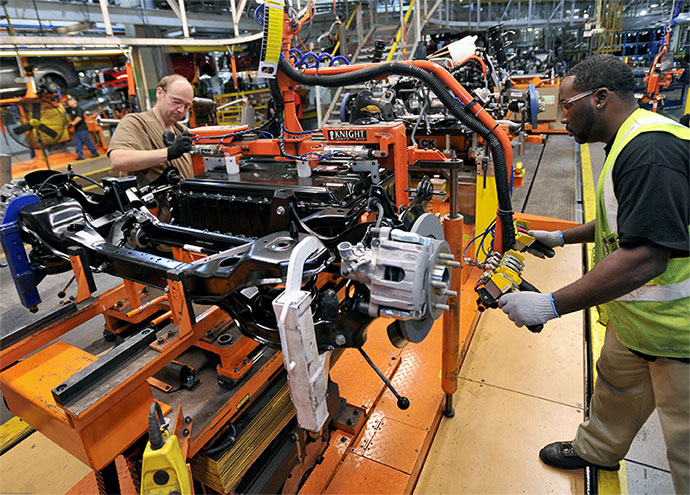 In November, Ford employees lower a battery into the chassis of a Focus Electric, one of five vehicles built at Michigan Assembly Plant (MAP) in Wayne, Mich. Flexible work stations make MAP the only manufacturing site in the world to build vehicles with five different fuel-efficient powertrains on the same line, and the only one to build four vehicles that deliver 40 mpg or more in real-world driving. In addition to the Focus Electric, MAP produces the C-MAX Energi plug-in hybrid, C-MAX Hybrid, as well as the conventional Focus and Focus ST high performance model.
Photo by Sam VarnHagen/Ford Motor Co.

Superchargers are designed for city-to-city travel, "enabling Tesla Model S drivers to travel for about three hours, take a 20 to 30 minute break to grab lunch or a soda or coffee, and get back on the road charged up," says the company. "For free."

By the end of June, Tesla says its network will include additional stations in California, coverage of the northwest region from Vancouver to Seattle to Portland, Austin to Dallas in Texas, Illinois and Colorado. Within six months the Tesla network will connect most of the major metro areas in the US and Canada, including expansion into Arizona, additional stations in Texas, Florida, and the Midwest, stations connecting Ottawa to Montreal, and across North and South Carolina into Georgia. A year from now, the Tesla Supercharger network will stretch across the continent. At the same time the network is improving, so is the charger itself. New technology expected to roll out this summer will allow the Model S to be charged at 120 kW, replenishing three hours of driving in just over 20 minutes.

The Drive to Innovate

Before the consumer comes the R&D and the manufacture. In January, Nissan ramped up assembly of the 2013 model year all-electric LEAF at its manufacturing plant in Smyrna, Tenn., where it is manufactured alongside the company's gasoline-powered products. The start of Nissan LEAF assembly in Smyrna comes on the heels of the opening of Nissan's battery plant in an adjacent facility. Nissan is the only automaker that manufactures its own electric vehicle batteries, at the largest lithium-ion automotive battery plant in the U.S.

"Bringing assembly of the innovative 2013 Nissan LEAF to our award-winning manufacturing plant speaks to the flexibility, efficiency and talent of our U.S. workforce," said Susan Brennan, Nissan's vice president of manufacturing in Smyrna.

LEAF assembly in Smyrna will contribute to Nissan's goal to manufacture 85 percent of its U.S. sales volume in North America by 2015, and having more local content will reduce exposure to fluctuations in foreign currency. The addition of LEAF and battery assembly has resulted in the creation of more than 300 U.S. manufacturing jobs, a number that can increase with demand.

The 2013 Nissan LEAF boasts 240V charging that is nearly twice as fast as the previous model. After two years on the market, the Nissan has become the global leader in EV sales with about 50,000 LEAFs sold to date, of which 19,500 LEAFs are on the road in the United States. 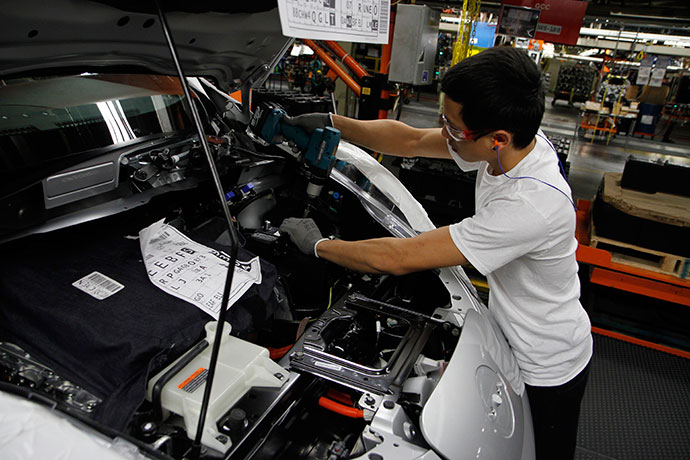 Like Ford, Nissan assembles its LEAF EV in Smyrna, Tenn., alongside other vehicle models. Unlike Ford, Nissan gets its battery packs from its own plant next door.
Photo courtesy of Nissan

For GE, the purchase of 2,000 Ford C-MAX Energi vehicles is another step in the company's initiative to convert half of its global fleet to alternative fuel vehicles. The addition of the Ford vehicles brings the number of alternative fuel vehicles in GE's fleet to more than 5,000 in its goal of 25,000 vehicles. The two companies will also work with researchers from Georgia Institute of Technology to study GE employee driving and charging habits, with the goal of improving all-electric driving and charging performance. Study findings will be shared with GE commercial customers to provide insights and help facilitate deployment of electric vehicles in their own fleets amid a growing electric vehicle infrastructure that now includes more than 10,000 public charging stations across the country.

Backing up still further in the chain, R&D investment continues to take place. Last November Chicago's aim to be what Mayor Rahm Emanuel calls "the electric vehicle and batteries capital of the nation" was bolstered by the selection of Argonne National Laboratory by the DOE as the Joint Center for Energy Storage Research (JCESR), combining the R&D firepower of five DOE national laboratories, five universities, and four private firms in an effort aimed at achieving revolutionary advances in battery performance. At the same time, Smith Electric Vehicles has chosen to locate a manufacturing plant in the city, and the city launched new incentives for electric truck use.

"The researchers working here will not only help advance the science involved in manufacturing batteries, they will also explore new technologies that leverage Kentucky's booming renewable energy resources, such as biomass and biofuels, that can supply the power to charge up tomorrow's batteries," said Kentucky Gov. Steve Beshear.

"It's not enough to invent a better battery," said Argonne Director Eric Isaacs. "We need to continue to revitalize our domestic battery industry by building tomorrow's batteries here in America."

One company that has already located nearby is nGimat Co., based in Atlanta, which opened a facility in Lexington to better access the Kentucky-Argonne Center's expertise and resources. The company is developing advanced lithium titanate energy storage materials for use in next-generation automotive batteries.

The Renault Z.E. Center on Île Seguin in Boulogne-Billancourt near Paris is the first EV test center in Europe. Between January 2012 and mid-May 2013, the center has organized over 21,000 EV test drives of its ZOE, Twizy, Kangoo Z.E. and Fluence Z.E. models, and has welcomed such visitors as Yann Arthus-Bertrand, Alain Prost and Sebastian Vettel (pictured above right in a Formula One test model EV) in its first 18 months of operation.