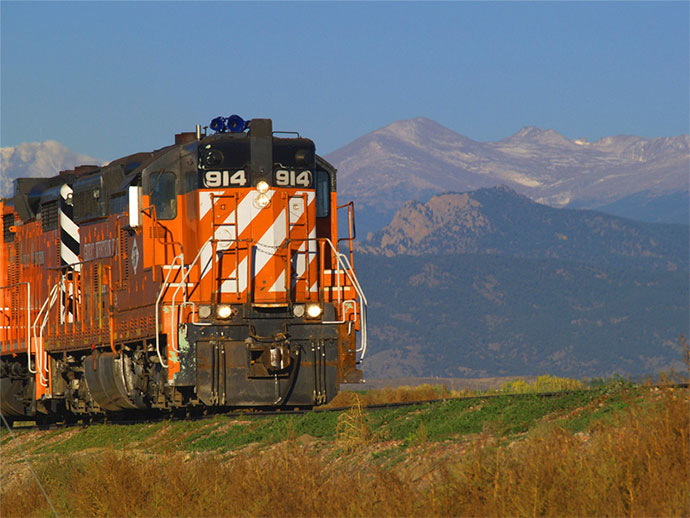 The Great Western Railway of Colorado owns and operates a total of 80 miles (128 km.) of track and interchanges with BNSF and UP. Greatly expanding its customer base since its acquisition by The Broe Group, GWR has become a vital link in Northern Colorado's transportation network, and currently serves such customers as Anheuser-Busch, Vestas, Front Range Ethanol, Eastman Kodak, Owens-Illinois, AllWeather Wood, Universal Forest Products, Amalgamated Sugar, and Wedron Silica.
by ADAM BRUNS
A 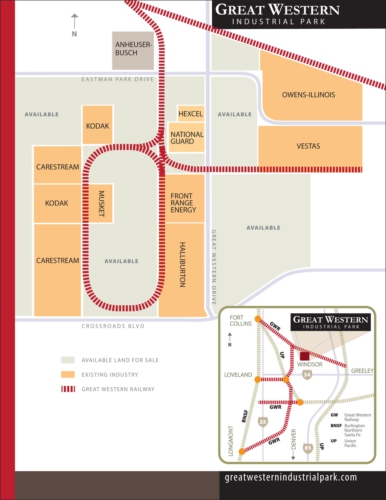 This schematic shows who's where in Great Western Industrial Park in Windsor.

search of Halliburton's 2,100 current job openings shows a bit over 1 percent of them (29) are in Colorado. Sixteen of those are in the company's Brighton district, where Halliburton this spring has brought online the world's largest frac sand terminal at Great Western Industrial Park in Windsor.

An energy boom is doing so, with vigorous brush strokes. The Halliburton facility alone employs 800 personnel today, from truck drivers to administration to engineers and mechanics, and covers half of the company's 12 business lines. Other development and support operations are putting a strain on housing supply.

Why all the activity? The Niobrara shale formation in northeastern Colorado (also extending into parts of Kansas, Nebraska and Wyoming), part of the Denver-Julesburg (DJ) Basin, where such companies as Anadarko and Noble Energy have made major oil plays, and where significant tight gas assets are also being uncovered.

In Windsor, as at similar facilities in North Dakota, the Halliburton terminal that opened March 18 will benefit from a "pipeline by rail" approach that sends out 110-car unit trains. When the project broke ground in January 2012, the park's developer — The Broe Group — announced, "With the abundance of existing infrastructure, the site is easily scalable beyond the initial loading capacity of 5.8 million barrels per year."

Windsor Renewal 1, an affiliate of The Broe Group, announced on Jan. 3, 2012, the purchase of 320 acres (130 hectares) of former Eastman Kodak Company property. Some of that property, including fuel-storage tanks with a total capacity of 48,000 barrels, has been converted for crude oil storage as part of the Musket Corp. pipeline-by-rail facility. Halliburton's facility sits on 54 (22 hectares) of the park's total 1,800 acres (728 hectares).

To serve Halliburton, Musket and other users within the park, the Great Western Railway of Colorado (owned by Broe) has extended its track system to complete a four-mile loop track, adding the unit-train capacity to address the growing demand for rail service throughout the region. Great Western Railway interchanges with both Burlington Northern Santa Fe and Union Pacific systems.

"We felt their connectivity gave us a competitive advantage in executing our crude-by-rail strategy," says Dan Withers, general manager – business development and assets for Musket. He calls the Niobrara oil field "probably the largest shale play for crude oil" outside of the Bakken and Eagleford plays in North Dakota and Texas, respectively.

Healthy Diversity for Windsor and for Broe

As for the industrial park, "When we looked at the park initially, we liked that it was an established industrial park with roads, rail line and utilities," Withers says. "Many of the sites we evaluate are undeveloped or underdeveloped. Broe, the Windsor Development Corporation and the Great Western Railroad are all well-respected companies. The Broe Group enjoys a solid reputation in the industry, and they are headquartered nearby in Denver, which made them an ideal partner."

Halliburton's facility in Windsor will support the activities of more than 500 Halliburton employees who will work in the DJ Basin.

"Working with companies like Halliburton, we're able to bring solutions to the energy services sector, originating sand from around the country and transporting it by rail," said Rich Montgomery, vice president of Great Western Development Co., an affiliate of The Broe Group, at the project announcement last year.

According to the US Geological Survey, of the 43.7 metric tons of industrial sand and gravel sold or used in 2011, 57 percent was consumed as frac sand and sand for well packing and cementing.

In attracting companies such as Owens-Illinois, Front Range Energy, Reliant Holdings, Vestas and Hexcel, the Great Western Industrial Park has helped generate more than 1,000 new jobs for the community. For 2011, the park contributed $1.6 million to Weld County's tax base, $1.1 million to Windsor's tax base, and $4.3 million to Windsor's school district. The $9.8-million Colorado Army National Guard Windsor Readiness Center opened there in 2012.

The town of Windsor is a Home Rule Municipality in Larimer and Weld counties. The Cache la Poudre River runs through the town, which is approximately halfway between Fort Collins and Greeley. The centralized location of the town has given rise to rapid growth in the last two decades.

According to Site Selection's New Plant Database, since January 2008 the two counties have welcomed some 23 corporate facility projects, including engineering services firm Spirae and Timberline Energy in Fort Collins; DCP Midstream, a natural gas firm, in La Salle; Flatiron Construction in Firestone; and gas handling equipment firm Matheson Tri-Gas in Longmont. But the area is by no means overdependent on energy: Among its largest investments have been a control products plant from Woodward in Fort Collins; composite industry firm Bach Composite in Fort Lupton; and Leprino Foods' cheese and whey products plant in Greeley.

'The Fuse Has Been Lit'

Halliburton has operated in the state of Colorado since 1935, and the company currently employs more than 1,600 employees in the state.

"With increasing interest in horizontal well development in the DJ Basin, we have seen more exploration and production by some of our key customers," said Rick Grisinger, Halliburton's senior region vice president, US Northern and Canada. "In preparation for this market growth, Halliburton continues to evaluate plans for expansion and increasing its business presence."

largest US onshore field at Wattenberg

That presence in Fort Lupton was increased in part because of a $2.4-million water and sewer extension, stretching service another 2.5 miles (4 km.). In addition to serving Halliburton's growth, the investment also opens up nearly 2,000 acres (327 hectares) to further industrial development.

"As a result of this injection of capital into our infrastructure by Halliburton, Fort Lupton is talking with several other oil and gas companies that are looking to open operations in our city," Fort Lupton Mayor Tommy Holton told the Colorado Oil and Gas Association. "The city has also experienced real interest by commercial developers to add restaurants and retail outlets because of our activities. The fuse has been lit and the City of Fort Lupton intends to make sure it keeps burning."

Halliburton itself is burning more natural gas, choosing the grand opening of the Fort Lupton expansion to debut its "Frac of the Future" program that includes CNG-powered trucks, solar- and gravity-powered sand pumps and natural gas-powered fracking pumps that can operated on LNG, CNG or gas brought out of the ground and conditioned on site. 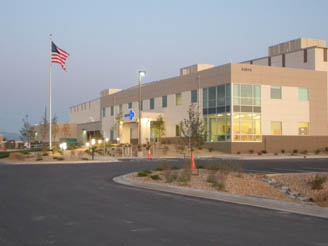 Hexcel's facility in at the Great Western Industrial Park in Windsor opened in 2009. It makes prepregs — epoxy resins reinforced with glass or carbon fibers — used by its next-door neighbor Vestas Wind Systems, a major customer.

There's enough opportunity to fuel field fleets with gas that major Niobrara investor Noble Energy announced in March it would construct its own $45-million LNG processing facility near Keota in Weld County. It will supply 100,000 gallons a day to fuel Noble's fleet and the equipment of other operators in the region. The new LNG complex is a part of the company's existing Keota natural gas plant and will come into service just after the Keota facility begins operations in the latter half of 2014.

According to documents filed with Weld County Planning, Noble located the facility on 80 acres (32 hectares) purchased from Quarter Circle Lazy H Ranch for the purpose of constructing a "natural gas processing facility, storage area and gas plant staging area, a future central processing facility, a LNG (liquefied natural gas) plant, and a power substation." The complex will employ up to 26 people.

"Noble Energy is expected to invest around $1.7 billion in its entire Colorado operations in 2013," said Zacks Equity Research in March. "Also, as much as $10 billion is estimated to be allocated for ensuring safe and eco-friendly development of oil and gas prospects in the DJ Basin in the next five years."

According to the Colorado Oil and Gas Association, the state ranks fifth in the country in U.S. natural gas production and 11th in oil production. More than 107,000 Coloradans have jobs supported by the industry, which provide $6.5 billion in total labor income and $31 billion in economic output annually.