DR's Carbon Neutral Energy Solutions Laboratory (CNES) at the Georgia Institute of Technology in Atlanta (pictured), has earned LEED-Platinum certification from the U.S. Green Building Council (USGBC). The 42,000-sq.-ft. CNES facility allows project-based experiments of varying durations to be rapidly modified in a non-traditional lab environment. The lab is to be a center for research in carbon-neutral energy conversion technologies including combustion, gasification, biochemical-enzymatic conversion of biomass, and carbon dioxide capture. 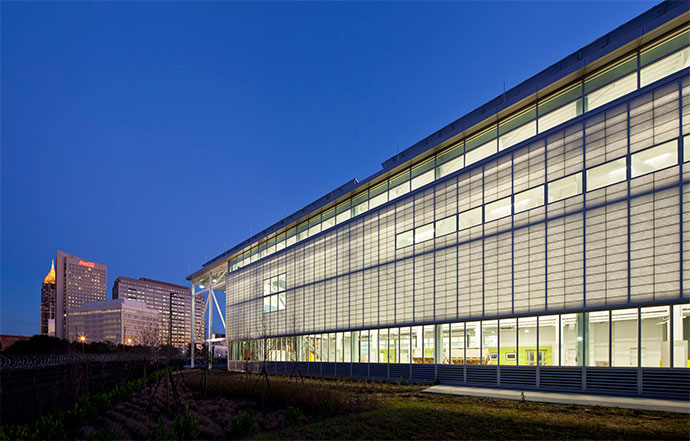 "We asked HDR to design a no-frills building to clearly express sustainability and energy efficiency," said Howard Wertheimer, FAIA, director, Capital Planning and Space Management at Georgia Tech, in an HDR press release. "The design-build team of HDR/Gilbane collaborated with Georgia Tech's facilities' professionals, researchers, and program leaders to develop the schematic design concept, including a matrix of energy-savings options that evaluated first costs, life-cycle costs, and carbon savings for each element." Among other key features, The CNES baseline energy model (based on ASHRAE 90.1) suggested energy use at 147kbtu/SF — the as-designed model has energy use at 70kbtu/SF — a savings of 54 percent. A 290-kwh photovoltaic system brings energy required down to 29kbtu/SF — a savings of 80 percent.

Need a map of wind energy manufacturing facility locations in the U.S., categorized by product manufactured there? Here's one, courtesy of the DOE.

"When invalid renewable fuel credits are 'produced' and sold, it undermines the integrity of an important program designed by Congress to reduce the nation's dependence on foreign oil and to grow the nation's renewable energy industry," said Cynthia Giles, assistant administrator for EPA's Office of Enforcement and Compliance Assurance. "Today's sentence shows that there are serious consequences, including jail time, for defrauding the renewable fuels program for personal gain."

"Any government program that is based on trust is vulnerable to a fraudster like Rodney Hailey," said U.S. Attorney Rod J. Rosenstein. "The only thing Rodney Hailey's 'Clean Green Fuel' business produced was the dirty money he used to fund his lavish lifestyle."

It's not all bad news from the EPA, however, as the organization and its partners at the Association of Climate Change Officers (ACCO), the Center for Climate and Energy Solutions (C2ES) and The Climate Registry (TCR) on Feb. 28 handed out their second annual Climate Leadership Awards. Among the 23 winners were programs and individuals from Intel, Microsoft, Entergy, Cisco Systems, Raytheon, CSX, Limited Brands, Abbott, Lockheed Martin and SC Johnson & Sons.

The agency's Center for Climate Leadership also offers a host of corporate project and process case studies, though the most recent posting was in June 2010 because the program has been phased down.

Both Washingtons are getting in on the car2go act. The subsidiary of Daimler North America Corp. just announced that in its first year in the nation's capital, 19,000 people had registered as members of "the world's first free-floating carsharing service." Last July the total membership was 8,500. The car2go network of 350 smart fortwo vehicles is available for members to use and share collaboratively in and around Washington, D.C. On average, car2go D.C. members' trips typically last between 20 and 30 minutes and range between three and five miles, said the company (you can do the mph math).

The membership numbers and enrollment pace in D.C. pale next to what the company subsequently announced this week in Seattle, where it only took 90 days for 18,000 members to sign up.

Car2go has ramped up to a fleet of 350 smart fortwo vehicles in D.C. serving 19,000 members at the one-year anniversary mark. But it only took the service 90 days to welcome 18,000 members in Seattle (right).

After deciding to invest in infrastructure for an LNG transport corridor in Alberta in 2011, Shell this week announced twin investments in new small-scale natural gas liquefaction units that it said "will form the basis of two new LNG transport corridors in the Great Lakes and Gulf Coast regions." In the Gulf Coast Corridor, Shell plans to install a unit at its Shell Geismar Chemicals facility in Geismar, La., to eventually supply LNG along the Mississippi River, the Intra-Coastal Waterway and to the offshore Gulf of Mexico and the onshore oil and gas exploration areas of Texas and Louisiana.

In the Great Lakes Corridor, Shell plans to install a unit at its Shell Sarnia Manufacturing Centre in Sarnia, Ontario, Canada. Once operational, this project will supply LNG fuel to all five Great Lakes, their bordering U.S. states and Canadian provinces and the St. Lawrence Seaway. Additional information on Shell and Natural Gas for Transport is available at http://www.shell.com/gasfortransport.html

Think shale is enriching everyone in North Dakota? Think again.

Will China's Suntech Power Holdings repay the $541 million in debt it owes by March 15? The Wall Street Journal explores why this pending deadline is a "major test of China's promise to consolidate its solar-panel makers."

Imperial County, Calif., is betting its future on renewable energy, according to this February feature in The Los Angeles Times.

Can a report called "Drill, Baby, Drill" published in February by an organization named Post-Carbon Institute be anything but balanced and objective? You be the judge. 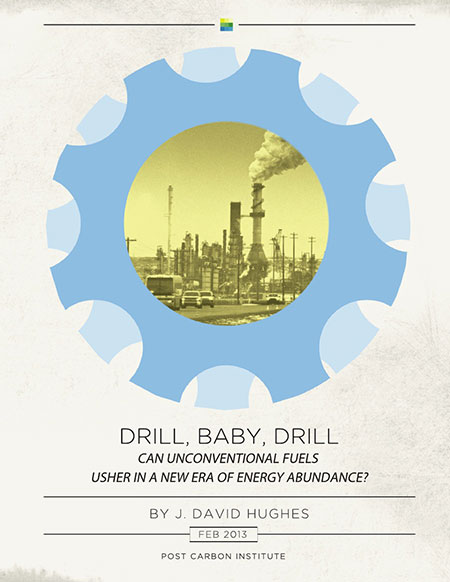 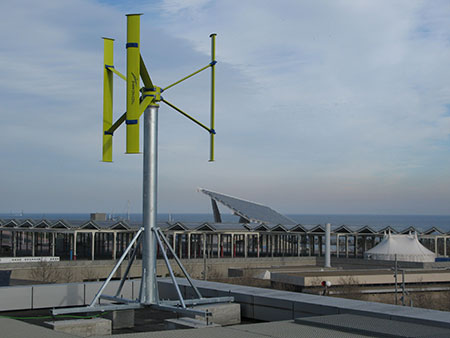 Technowind wind turbines such as this one now installed at the Barcelona International Convention Centre are notable for their optimal use of the turbulent winds generated in cities.


The Barcelona International Convention Centre (CCIB) announced in mid-February it had installed a 1kW vertical-axis wind turbine on its northeastern roof in order to generate its own energy. The project was jointly developed with the engineering company Virtus Nova Enginyers, using the silent Technowind vertical-axis wind turbine, designed and manufactured entirely in Catalonia by the Catalan company Ficosa.

"Apart from choosing the most efficient system and the one best suited to the characteristics of our facility, we also wanted equipment that was manufactured in Catalonia, in order to avoid the carbon footprint involved in buying a product from another country and transporting it here," said Philippe Mesnard, facility and maintenance director of the CCIB. "The scalability of the system allows us to incorporate new wind turbines in the future so that we can continue to contribute to energy self-sufficiency, which is one of the goals of the city of Barcelona."