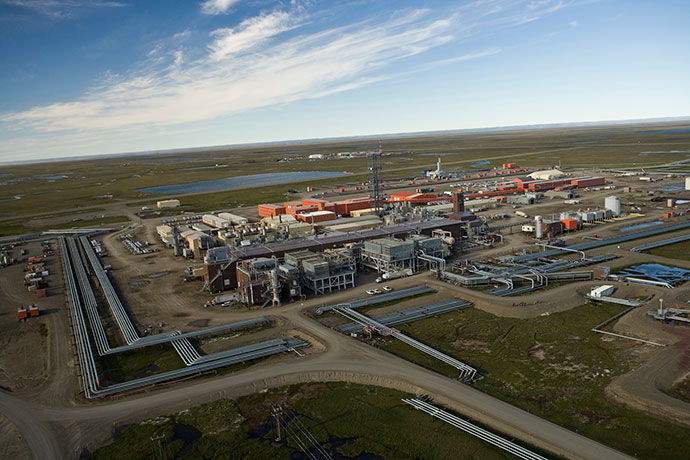 Among ConocoPhillips’ operations in Alaska is this complex in the Kuparuk River Field, discovered in 1969 about 40 miles (64 km.) west of Prudhoe Bay. Production began in 1981 and increased to a record rate of 322,000 barrels per day in 1992. Kuparuk reached a milestone in July 2005 when cumulative production reached 2 billion barrels.
Photo courtesy of ConocoPhillips
B

On Feb. 15, Gov. Sean Parnell received a letter from the companies stating that the concept selection phase for the project had been completed, addressing details Parnell had requested in his State of the State address this year: the size of the pipe; the daily volume of gas; the location of a gas treatment plant; the number of compressor stations; the size and scope of a liquefaction plant and LNG storage facilities; and the number of off-take points for Alaska communities to obtain gas for local use.

"This represents historic progress," said Parnell of a project, announced last spring, that would be one of the largest LNG projects in the world. "Never before has a gasline project been so specifically aligned and described in detail by the companies that have the capacity to build, fill, and operate it. A critical part of the concept selection is to ensure that Alaska's gas goes to Alaskans first, which will dramatically improve the quality of life and cost of living for many Alaskans." 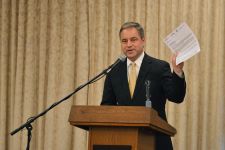 Governor Sean Parnell in February received a letter from multiple oil and gas producers and TC-Alaska, detailing their concept for an Alaska liquefied natural gas project.

Photo courtesy of the Governor’s office

This spring, aggressive benchmarks require the companies to finalize an agreement to enter the pre-FEED stage — pre-front-end engineering and design — followed by a full season of field work this summer. By entering this phase, the companies will spend hundreds of millions of private sector dollars to advance the LNG project toward permitting and construction. As the companies have been developing the project concept, the Parnell administration says it has undertaken significant outreach to overseas markets to highlight the comparative advantages of Alaska LNG exports, and to other key stakeholders, including federal officials in charge of export licensing.

"A successful Alaska LNG project would result in thousands of jobs and the opportunity for decades of domestically produced natural gas for homes and businesses in Alaska," the companies wrote in the February letter.

But their March 2012 letter to the governor outlined some of the obstacles ahead.

"Commercializing Alaska natural gas resources will not be easy," the CEOs wrote. "There are many challenges and issues that must be resolved, and we cannot do it alone. Unprecedented commitments of capital for gas development will require competitive and stable fiscal terms with the State of Alaska first be established."

That means tax reform, something Parnell has championed, and which is slowly making its way through the Alaskan legislature at this writing. According to earnings guidance from ConocoPhillips Alaska (COPA) issued in January, COPA incurred an estimated $1.2 billion in obligations to Alaska and the federal government, more than twice the company's net income, during the fourth quarter of 2012. Of this amount, an estimated $900 million was due to Alaska in the form of severance taxes, royalties, property taxes and state income tax. Capital spending for 2012 was approximately $800 million representing a small increase versus the prior year.

"The fourth-quarter earnings continue the general trend where we pay twice as much in taxes as we keep," said Bob Heinrich, vice president finance for COPA. "We are hopeful that the Governor and legislature will be successful in creating a better business climate on the North Slope."

COPA taxes and royalties due to Alaska and federal income tax for the full year amount to $4.9 billion, with $3.7 billion due to Alaska. COPA earnings in 2012 were $2.3 billion.

"Conoco Phillips is proud to have been a partner with the state of Alaska in developing Alaska's oil and gas resources for more than 50 years," wrote Scott Jepsen, vice president for external affairs at ConocoPhillips Alaska, in the Anchorage Daily News in October, citing the company's direct employment of more than 1,000 Alaskans, as well as the thousands of contractor jobs supported by the company's activity. "However, high taxes on North Slope oil production, in particular the tax increases passed by the Legislature in 2007 under a bill called ACES, are hurting the investment climate on the North Slope and ultimately the long-term health of Alaska's economy."

According to ConocoPhillips, since ACES was enacted in 2007, through to year-end 2011, the company has reported almost $10 billion in net Alaska income, but paid approximately $16 billion in taxes and royalties to the state of Alaska. Between 2007 and 2011, oil prices rose from approximately $70 per barrel to $106 per barrel. The company's net income rose by a much smaller percentage, from $22 to $25 per barrel, wrote Jepsen, but because of the progressivity of the ACES policy, the state's share per barrel rose from $27 to a high of $51. Such reslicing of the pie is not conducive to capital investment, he said, comparing recent activity in the Lower 48.

"Despite rising oil prices, ConocoPhillips' capital budgets in Alaska in 2010 to 2012 remained flat at about $900 million per year," he wrote. "In the Lower 48, our capital budgets tripled, from $1.6 billion in 2010 to $4.8 billion in 2012, driven by attractive Lower 48 oil plays given today's high oil price environment. This is the fundamental problem of ACES — it skews the risk-reward balance of investments at high prices, making the North Slope a less favorable place to invest."

Decision Bodes Well for Development and for Wildlife

A policy skewing more favorably toward both energy development and the natural world was announced in February in Washington, D.C., when Secretary of the Interior Ken Salazar signed the Record of Decision (ROD) for the National Petroleum Reserve in Alaska (NPR-A). 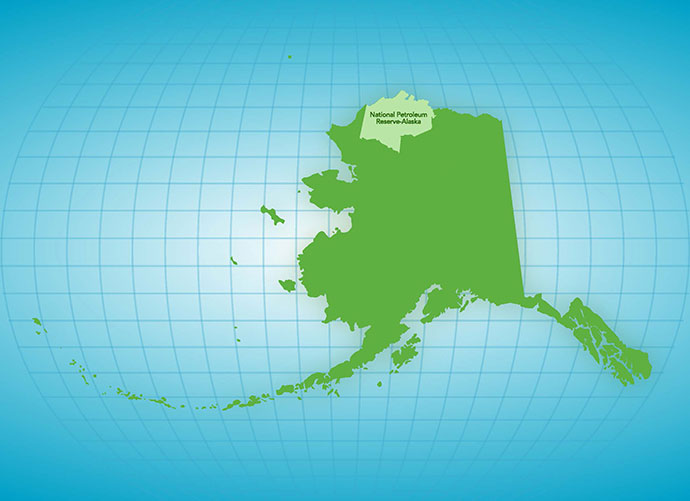 The final action allows for the development of 72 percent of the estimated economically recoverable oil in the nearly 23-million-acre (9.3-million-hectare) Reserve, while protecting the vital subsistence resources of Alaska Natives and the habitat of world-class wildlife populations. "The balanced approach under this plan is the result of extensive local input and will help guide the responsible production and transport of the substantial oil and gas resources in and around the Reserve," said Salazar. "This comprehensive plan will allow us to continue to expand our leasing in the NPR-A, as has happened over the last three years, while protecting the outstanding and unique resources that are critically important to the culture and subsistence lifestyle of Alaska Natives and our nation's conservation heritage."

In fiscal year 2012, Interior paid out $12.15 billion in revenue generated from energy production on public lands and offshore areas — a $1-billion increase over the previous year.

The ROD provides explicit confirmation that potential pipelines carrying oil or gas from operations in the Chukchi and Beaufort Seas can be constructed through the NPR-A. Meanwhile, the BLM will establish an NPR-A working group comprising tribal, corporate and government representatives that will provide input on a full range of management and future development issues.

The plan allows for access to oil and gas resources on 11.8 million acres (4.7 million hectares), which are estimated to hold 549 million barrels of economically recoverable oil and 8.7 trillion cu. ft. of economically recoverable natural gas. Among other pending projects in NPR-A, ConocoPhillips' CD-5 Alpine Satellite Development Project received a go-ahead from the U.S. Corps of Engineers in December 2011.

"This balanced plan protects some of America's greatest treasures in the Arctic while allowing for measured resource development," said Joshua Reichert, an executive vice president at The Pew Charitable Trusts who leads the organization's environmental work, of the Dept. of the Interior decision. "The U.S. government's actions preserve core calving and migration areas for two of the state's largest caribou herds, maintaining critical subsistence resources for more than 40 communities in northern and western Alaska. This plan fulfills the congressional intent for the reserve by protecting vital wildlife, waterfowl, and fish habitat, safeguarding subsistence opportunities and allowing for extraction of the majority of the area's oil. It is a model for sustainably managing our Arctic resources, both onshore and off."

Meanwhile, exploration in the Outer Continental Shelf saw a hiccup in late February, when Shell announced it will pause exploration drilling activity for 2013 in Alaska's Beaufort and Chukchi Seas to prepare equipment and plans for resumption of activity at a later stage. "Alaska remains an area with high potential for Shell over the long term, and the company is committed to drill there again in the future," said the company.

"While Shell's decision to pause drilling in Alaska is a disappointment, I commend the company's commitment to safety and responsible development," said Gov. Parnell. "Much progress has been made toward developing the vast resources in Alaska's Outer Continental Shelf, and we recognize this is a long-term endeavor. Taking the long view, we are at the early stage of a new era of oil exploration in the Arctic, one that will continue for decades in a measured and responsible way." 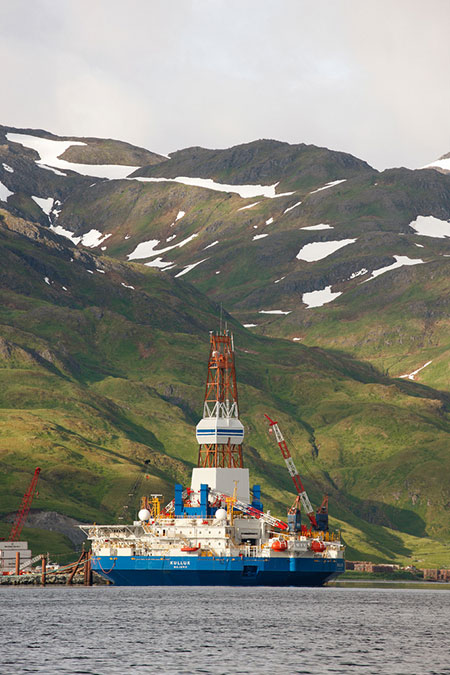 This Shell rig, the Kulluk, was damaged in an incident brought on by strong weather, and has been towed to Asia along with another rig for maintenance and repairs as the company temporarily suspends exploration drilling activity in Alaska’s Beaufort and Chukchi Seas.
Photo courtesy of Shell