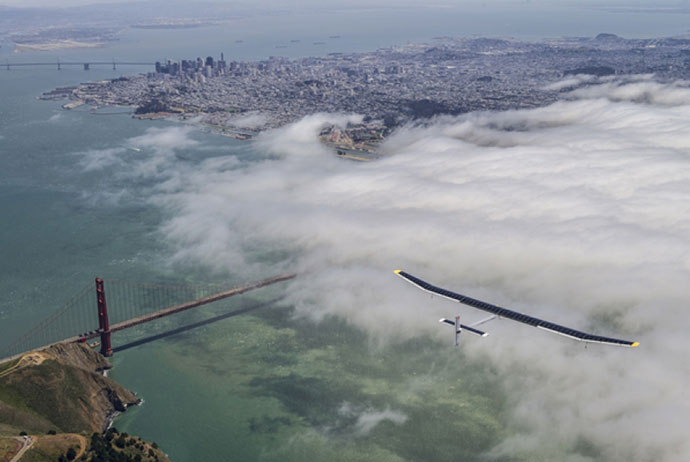 You may have read our past coverage of the visionary Solar Impulse solar-powered aircraft. If you live in the U.S., you might have a chance over the next couple months to see this incredible creation in action, as the Solar Impulse team, backed by the Swiss government, makes a coast-to-coast tour. Above, the airplane soars over the Bay Area in April.

Back on the ground, photographer Jamey Stillings show that the landscape wrought by renewable energy development can be no less stunning, even as communities wrestle with its effects on the land. Post Carbon Institute takes a similar, if less refined, approach to the oil & gas landscape.

Speaking of Canadian oil & gas, have you heard the one about the Canadian media mogul who wants to build a $25-billion refinery in the growing energy hub of Kitimat? It's no joke. 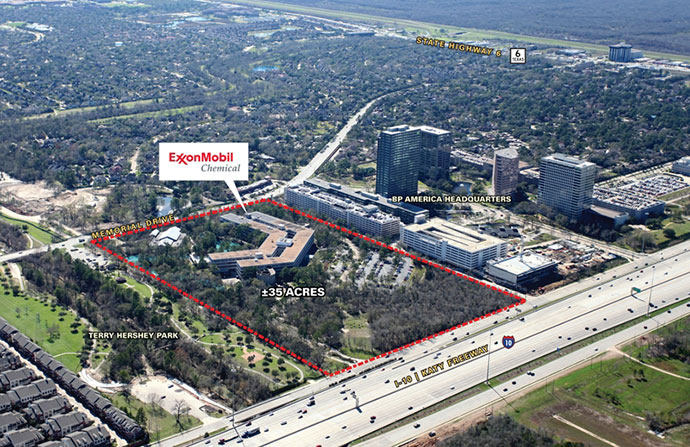 Holliday Fenoglio Fowler, L.P., announced April 16 that as the appointed real estate advisor, it is marketing the ExxonMobil Chemical Co. headquarters campus (pictured) in Houston's Energy Corridor. Featuring a complex with 352,170 rentable sq. ft. on 35 acres along I-10 on Katy Freeway, the site is adjacent to the BP America Headquarters, across Interstate 10 from both ConocoPhillips and Shell Oil's North American Exploration and Productions headquarters, and within a mile of Mustang Engineering and Dow Chemical. Exxon Mobil is currently planning a major expansion of its corporate campus under construction near The Woodlands.

The New Jersey Board of Public Utilities announced in March that New Jersey's solar industry had surpassed one gigawatt (GW) of installed solar energy. As of the end of February 2013, a total of 1,008.4 MW of solar capacity has been installed statewide through 20,340 of solar projects. That number includes more than 15,500 residential, 3,000 commercial, 300 schools and 200 government projects constructed in places such as, rooftops, carports, landfills and brownfields. In July 2012, Gov. Chris Christie enacted bipartisan legislation that couples acceleration of the renewable portfolio standard (RPS) for solar energy with a reduction of the solar alternate compliance payment (SACP) levels. The Solar Act will help New Jersey's solar industry to meet an important goal of the Governor Christie's 2011 Energy Master Plan: New Jersey is on target to meet or exceed its 22.5 percent renewable energy standard portfolio by 2021, as outlined in the 2011 Energy Master Plan. 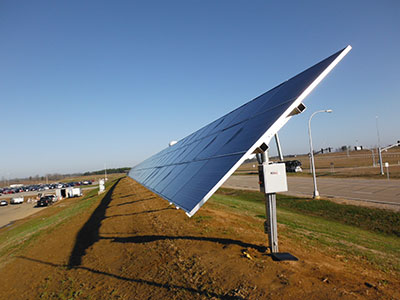 Cranes in the air are as good an indicator as any of energy activity on the ground. Case in point: California-based Bigge Crane and Rigging just announced a new location in Denver that offers bare rough terrain and crawler crane leasing. "More importantly," said the company, "the Denver terminal provides a logical waypoint between established Bigge locations in Salt Lake City and their fast growing regional headquarters in Houston, Texas. Bigge's push into the plains states is now bearing fruit with new jobs in Oklahoma, Kansas and Missouri. Bigge has eight cranes on three distinct industrial projects. Bigge has several cranes at a refinery in Sayre, Okla.; both rough terrain and crawler cranes at a gas plant project Hugeta, Kan.; and is also supplying a pipeline job in Miller, Mo., with cranes. The geographic proximity of Bigge locations in Denver and Houston was instrumental in providing the logistical support, transportation and field support for these projects." 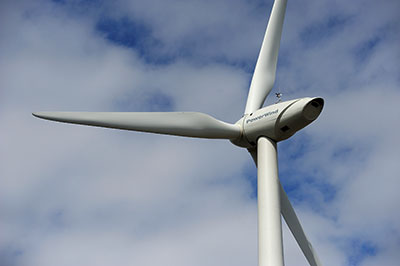 New Delhi-based PowerWind Ltd. in late May sold its first four PowerWind 56 turbines (pictured) to two locations in the U.S. (including Surenergy in Port Clinton, Ohio) and one in Romania. PowerWind GmbH in Hamburg filed for insolvency under self-administration at the district court in Hamburg on April 24, 2012. The former RK Wind Ltd. (renamed in February to PowerWind Ltd.) bought a major share of inventories, production-related assets and IP rights required for the production of PowerWind systems at the end of 2012.

After the insolvency of PowerWind GmbH, the demand of the PowerWind platform was still huge, says the company. So PowerWind Ltd. decided to offer the PowerWind 500, PowerWind 56 and PowerWind 100 platforms to clients. "Through its large project pipeline and a financially strong mother company, PowerWind Ltd. offers the financial security we need to secure banks and clients. A team of former PowerWind employees ensures that the products retain their robustness and quality on a long-term base," says Marilyn Heib, the former sales team leader for Eastern Europe and now head of sales Europe and USA for PowerWind Ltd. 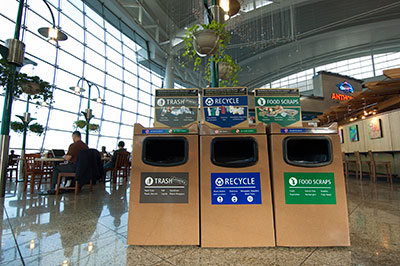 Seattle-Tacoma International Airport’s efforts to be green extend from its LEED-Silver-certified new rental car facility to food waste recycling in its concourses.
Photo courtesy of SeaTac

Seattle City Light superintendent Jorge Carrasco celebrated Earth Day by presenting Port of Seattle commissioners with a $408,275 rebate award check for energy efficiency measures built into the rental car facility at Seattle-Tacoma International Airport, recently certified as LEED-Silver. The Port and City Light began collaborating in 2006 to design a facility that incorporates energy-efficient lighting with controls that automatically turn off unneeded lighting during daylight hours, an efficient electrical transformer, and efficient cooling equipment. The facility also takes advantage of area winds, using natural ventilation to reduce the need for fans to move car exhaust out of the area. Those measures will reduce the rental car facility's electricity use by more than 1.5 million kilowatt-hours (kWh) each year and lower the Port's electricity bills by about $99,000 annually.

"This rebate highlights the Port's Century Agenda goal to be the greenest and most energy efficient port in North America," said Port of Seattle Commission President Tom Albro. "Finding the creative ways to decrease energy need through conservation is a core principle for the port now and in the future. The Rental Car Facility is a shining example of the work of everyone involved in the project." On peak days, the five-story rental car facility will process 12,000 to 14,000 rental cars.

The very next day, the Port of Seattle Commission recognized the outstanding environmental achievements of businesses at Seattle-Tacoma International Airport with its Green Gateway Environmental Excellence Awards. Among them was FedEx, whose lighting retrofit achieved estimated annual energy savings of 377,377 kWh per year, or 70-percent energy savings, resulting in estimated annual utility bill savings of $33,341. The project is expected to have a 1.5-year payback without factoring in partial installation funding provided through the Bonneville Power Administration energy saving incentive program.