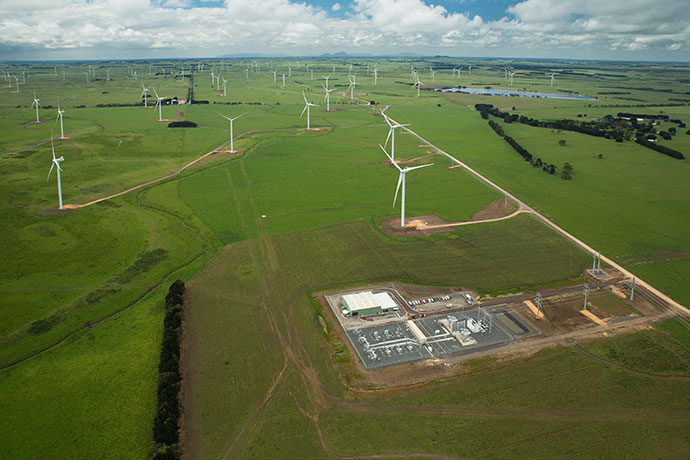 The AU$1-billion (US$1.02-billion) Macarthur Wind Farm located in the Shire of Moyne in the Australian state of Victoria comprises 140 Vestas V112-3.0 MW wind turbine generators and was constructed by a Vestas/Leighton Contractors consortium.
Photos courtesy of AGL
by ADAM BRUNS 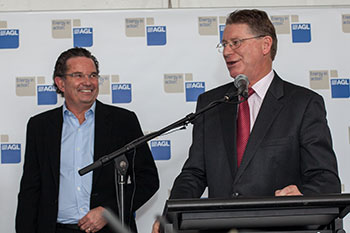 T he 140-turbine Macarthur Wind Farm site near Hamilton, 290 kilometers (180 miles) west of Melbourne, in the Shire of Moyne in the southeastern Australian state of Victoria, sits not far from several state and national parks, and just a long stone's throw inland from the coast at Port Fairy. There are only three landowners of the 5,500 hectares, and only 150 people live within 5 km. (3.1 miles).

For operators of the largest wind farm in the Southern Hemisphere, those are winning numbers for more reasons than one.

On April 12, the installation was officially opened by the Hon. Dr. Denis Napthine MP (left), premier of Victoria and local member for South-West Coast, and Michael Fraser, managing director and CEO of AGL, the 175-year-old Australian utility that operates retail and merchant energy businesses, power generation assets and an upstream gas portfolio.

Plans originally filed with the State of Victoria in May 2006 called for 183 turbines and 329 MW of total capacity. But the machines have improved: The completed AU$1-billion farm has 140 Vestas turbines and 420 MW of capacity, enough to power more than 220,000 average Victorian homes and abate more than 1.7 million metric tons of greenhouse gases every year — the equivalent of taking more than 420,000 cars off the road.

The project came in on time and on budget from joint venture partners AGL Energy Limited (AGL) and Meridian Energy. AGL said the site was chosen for its large landholdings, landowner commitment, community support, wind resource and proximity to the existing transmission grid. The average wind speed at the site is 7.6 meters/second (17 miles per hour). The electricity generated by the project will connect to the grid at the Heywood-Mooralbool 500kV transmission line some 14 km. (8.7 miles) away.

"This project has been made possible because of strong bi-partisan political support for Australia's 2020 Renewable Energy Target," said Fraser, citing a national policy that calls for a minimum 20 percent of electricity generation to come from renewable sources by 2020. "Projects like this also don't happen without support from all levels of government, in this case including support from federal, state and local governments.

"The Macarthur Wind Farm is a major investment in clean, renewable Australian energy and in the social and economic development of this community," said Federal Minister for Resources and Energy Gary Gray.

"We are proud that it not only delivers clean, renewable energy, but has been able to generate significant economic benefits for the region during development and construction," said Fraser. "This includes approximately 875 jobs in the region, 2,490 in Victoria, and 2,782 in Australia. A permanent full time work force of approximately 20 people for the next 25 years of operation will also boost local employment."

"It is particularly pleasing that a significant number of the towers used for this project were constructed locally in Portland by Keppel Prince Engineering," said Premier Napthine. The joint venture team also established a community fund that is contributing to such things as fire engine purchases and other facility upgrades in the area.

Meeting the 20 percent target by 2020 will require an estimated $30 billion of investment in new renewable energy generation. Helping pay the bill will be the price placed on carbon by the national government on July 1, 2012. Resource mining by Chinese and other Asian enterprises is big business in Australia, where GDP is expected to expand by 3 percent this year "on the back of higher capital investments, strong output growth in the mining sector, and increased exports," said a February report from Deloitte.

It's All In Your Head

AGL followed up the grand opening on April 30 with a declaration that the wind farm is "successfully operating within the strict noise limits set in the wind farm's State Planning Permit, as evidenced in the Macarthur Wind Farm Noise Compliance Assessment independently produced by AECOM Australia Pty Ltd (AECOM)."

The permit required that pending landowner approval, noise monitoring was to be carried out at specified dwellings neighboring the Macarthur Wind Farm. Noise loggers were installed between February and March 2013 to capture the noise data. The Noise Compliance Assessment is part of a wider noise monitoring program implemented by AGL since the first turbines started operating in late September 2012.

"All noise monitoring results received to date at 13 neighbouring dwellings demonstrate that the Macarthur Wind Farm complies with the acoustic requirements of the Planning Permit," said AGL.

"AGL is pleased that the independent AECOM Assessment demonstrates that the Macarthur Wind Farm continues to operate well within the Planning Permit requirements," said Scott Thomas, AGL's Group General Manager Power Development. "We appreciate some community members have been concerned about wind farm noise levels so we wanted to make sure it was operating correctly from the start and give the community a greater level of comfort. Over 40,000 hours of noise monitoring has been conducted at Macarthur, which is well beyond the amount of noise monitoring required in the Planning Permit. All results received to date confirm that Macarthur Wind Farm remains compliant within the Government's strict noise regulations that are in line with the World Health Organisation's guidelines for noise limits."

The findings are in keeping with a study just released this spring by Simon Chapman, a professor of public health at Sydney University, that suggests purported illnesses caused by wind farms are essentially psychological phenomena caused by the power of suggestion, not power turbines. It's called the nocebo effect, after a medical term meaning "a harmless substance that when taken by a patient is associated with harmful effects due to negative expectations or the psychological condition of the patient."

The study examined noise complaints related to all 51 Australian wind farms, going back to 1993. Chapman found that 33 of those farms (including 17 where the turbines are greater than 1 MW in size) have never received a complaint from any of the 21,592 residents within 5 km. of their turbines.

"Only 131 individuals across Australia representing approximately 1 in 250 residents living within 5 km. of wind farms appear to have ever complained, with 94 (72 percent) of these being residents near six wind farms which have been targeted by anti-wind-farm groups," said the report. "The large majority [104 out of 131, or 79 percent] of health and noise complaints commenced after 2009 when anti-wind-farm groups began to add health concerns to their wider opposition. In the preceding years, health or noise complaints were rare despite large- and small-turbined wind farms having operated for many years.

"In view of scientific consensus that the evidence for wind turbine noise and infrasound causing health problems is poor, the reported spatio-temporal variations in complaints are consistent with psychogenic hypotheses that health problems arising are ‘communicated diseases' with nocebo effects likely to play an important role in the aetiology of complaints," said the report's conclusion.

According to the study's complaint analysis, of the 150 people living within five kilometers of Macarthur, 21 of them in eight houses complained within two days of the September start-up of the first two of the eventual 140 turbines.

The Macarthur Wind Farm is the latest addition to AGL's already significant portfolio of renewable energy generation assets and brings AGL's renewable energy capacity to 1,720 MW, including 796 MW of hydro power, and 20 MW of biogas, biomass and landfill gas.

Victoria's wind energy generation capacity of 499 MW was nearly doubled overnight by the launch of Macarthur. Premier Napthine said there are more than 1,100 wind farm turbines with planning approval in the state that have yet to be constructed. 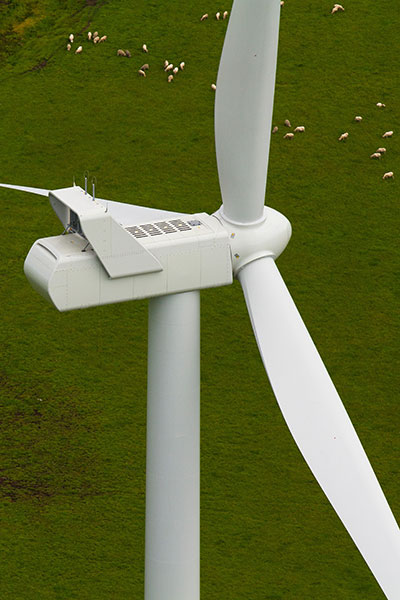 A unique vantage point on one of the Macarthur turbines appears to indicate unperturbed sheep.

"South West Victoria has played a key role in developing alternative sources of energy generation capacity," he said last month. "Last year I attended the opening of the Mortlake gas-fired power plant and the Coalition Government previously announced $5 million in funding for a wave energy trial project off the coast of Port Fairy."

Meanwhile, the state's planning ministry in early April approved an amendment to the Moyne Planning Scheme that will facilitate the use and development of a new $600-million gas-fired power station and associated works in a new Special Use Zone in Tarrone. The 920-MW project is to be constructed by AGL, and has been designed to capitalize on the nearby 500Kv electricity transmission line and the SEAGas pipeline, which carries natural gas from near Port Campbell to South Australia.

The renewables push is just one environment-friendly part of a broader move toward business-friendliness in Victoria. This week the state government announced that a new Office of State Development will be established to drive Victorian growth and investment with funding of $16 million over four years, said Deputy Premier and Minister for State Development Peter Ryan.

"The new office will be an interface for business and industry and cut through red tape by facilitating across government the development of significant projects in Victoria," said Minister Ryan. "The establishment of this major investment focus is a key action in the Coalition Government's vision to secure Victoria's position not just as a leading state, but a regional economic center, benefiting from and contributing to the Asian Century."