New research shows which territories led the U.S.
in wind power installations in 2012, and why.

Iberdrola Renewables added three new wind farms to its U.S. fleet at the end of 2012, adding to a portfolio of projects that now spans 19 states. The three farms, including the Manzana project in Kern Co., Calif. (pictured) all reached commercial operation in December, and represent a total investment of approximately $700 million.
Photo courtesy of Iberdrola
by ADAM BRUNS 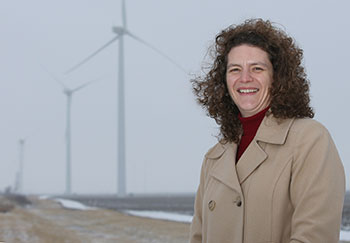 Linda Prokopy's research sheds light on why some communities in Indiana are welcoming of wind turbines while others have rejected them.
Photo by Tom Campbell courtesy of Purdue Agricultural Communication

Not knowing whether the wind production tax credit would be renewed or not, a megaload of wind farm projects and expansions came online just before the finish line in 2012.

On New Year's Day, Congress enacted a one-year extension of the PTC and also relaxed the rules. Under this extension, projects that begin construction before the end of 2013 are eligible to receive a 2.2 cents/kWh PTC for generation over a 10-year period.

Wind turbines installed during 2012 were mostly concentrated in the Midwestern and Southern Great Plains regions. These are regions with high-potential wind resources and low population density (thus reducing problems related to siting and permitting). But research by Purdue University Linda Prokopy shows one more reason: The population in those areas can be more open to wind farm development.

According to two studies funded by the Purdue College of Agriculture and carried out by Prokopy, an associate professor of natural resources planning, and former graduate student Kate Mulvaney, more than 80 percent of survey respondents in three Indiana counties said they either supported wind farms in their counties or supported them with reservations. That was the case even in areas where local governments were against wind farm development or newspaper articles trended toward more negative aspects of the farms.

"We found that there is not a lot of opposition from the people in the Midwest," Prokopy said in a Purdue news release. "And there are not a lot of perceived negative impacts from people who have or live near wind turbines."

Mulvaney said Benton County, which has more than 500 turbines and hundreds more approved, welcomed wind farms for a variety of reasons, including local government support and options for diversifying development within the agricultural-based economy.

Despite support from residents, Boone County turned down wind farm development. Prokopy said the biggest factors in that decision were a well-organized opposition and a lack of governmental support.

"The opposition appeared to come from people who worked in Indianapolis but lived in rural parts of the county. They wanted to preserve their landscape," Prokopy said. "They were in the minority, but they were very vocal and, thus, influential in terms of local government."

In Tippecanoe County, Prokopy and Mulvaney said the government was supportive, but there was also a strong vocal minority.

"The opposition in Tippecanoe County was focused on setbacks, noise regulations and other rules," Prokopy said. "It was focused on making sure people were protected."

Prokopy said the data suggest the Midwest could be more receptive to wind farm technology, especially in more rural areas that lack other development.

"It certainly shows that many of the concerns that have kept wind farms from developing on the coasts aren't issues here in the Midwest," Prokopy said.

But Portland, Ore.-based Iberdrola Renewables, which added three new wind farms in December to its 19-state portfolio of projects, has seen its share of success on both coasts. The three new projects were in Massachusetts, New Hampshire and California, and represent a total investment of approximately $700 million. The company earlier in the year completed projects in Iowa, Pennsylvania and Ohio.

"These projects have begun delivering the environmental benefits of clean, renewable energy, but they also create significant economic impacts resulting from hiring numerous local workers and companies, and making long-term tax and lease payments to the local communities," said Martín Mugíca, president and CEO of Iberdrola Renewables, LLC, in January. "Each project represents the culmination of years of hard work, and we could not do it without the vision and support of our shareholders, customers and employees."

The 189-MW Manzana Wind Power Project in Kern County, Calif., includes 126 GE 1.5-MW wind turbines. "This project will support the local economy with property tax payments estimated to be more than $50 million and lease payments expected to total more than $30 million over the life of the project," said the company. "The property taxes will support schools, public health, fire, library and other necessary services in Kern County. During construction, the project created 216 construction jobs at its peak and resulted in $10.3 million spent locally.

Rising on Crum Hill in Monroe, Mass., and on Bakke Mountain in Florida, Mass., the 19-turbine Hoosac Wind Power Project is now the Commonwealth’s largest wind farm. During construction the 28.5-MW project employed a peak of 140 workers, with $3.9 million spent locally during building. Over the life of the project, Hoosac will generate approximately $6.8 million in tax revenue for the towns, and lease payments to local landowners will total another $3 million. All of the energy is under contract with NSTAR Electric, a subsidiary of Northeast Utilities.

The Groton Wind Farm is situated along two ridge features in the town of Groton, N.H., in Grafton County. It consists of 24 Gamesa G87, 2.0 MW wind turbines. It is the company’s second project in the Granite State, the first being the 24-MW Lempster Wind Farm, in operation since 2008.

During construction, Groton peaked at 277 workers on-site, 52 percent of whom were local. Local spending during this project totaled $3.9 million. Annually, Groton will be paying $528,000 to the town of Groton, with an annual 2.5 percent increase, an amount approximately equal to the town’s annual municipal budget; $450,000 in state taxes and approximately $275,000 to local landowners. Like Hoosac, all of the energy is under contract with NSTAR Electric.

Of all existing capacity at the end of 2012, wind made up 5.5 percent. "However," notes the EIA, "wind provided only 3.5 percent of total electricity generation during 2012, reflecting a capacity utilization rate that is limited by the intermittent nature of the wind resource. 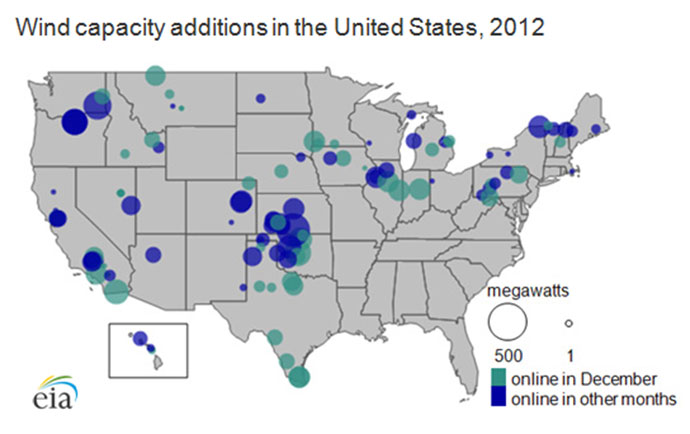 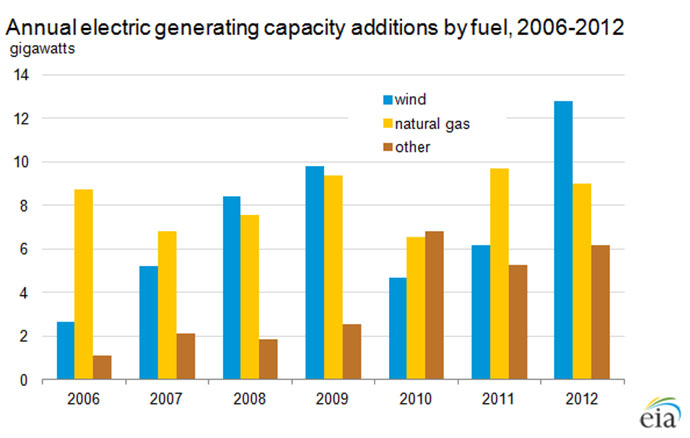