The Commonwealth and California lead the nation in energy efficiency policies that work. 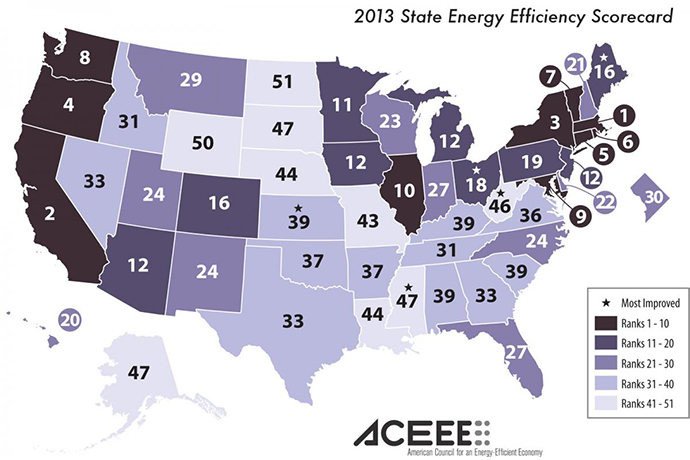 “Massachusetts retains the top spot for the third year in a row based on its continued commitment to energy efficiency under its Green Communities Act,” said the ACEEE. “In California, requirements for reductions in greenhouse gas (GHG) emissions have led it to identify several strategies for smart growth, keeping the state in a top position at #2. Connecticut is also closing the gap due to passage of a major energy bill in 2013, and Illinois is making its first appearance in the top 10 this year, reaping the benefits of increased energy savings called for in the state's energy efficiency resource standard.”

"Massachusetts continues to lead the nation in energy efficiency because we have made the choice to shape our future, rather than leave it to chance,” said Gov. Patrick. “We will continue to focus on policies that create jobs, decrease dependence on imported energy sources and protect our environment by reducing emissions."

States needing to boost their efforts include No. 50 North Dakota, No. 49 Wyoming, No. 48 South Dakota, and at a tie for No. 47 Alaska and Mississippi, which curiously also appeared on ACEEE's list of the top five most improved states. Last year Mississippi passed comprehensive energy legislation that included energy efficiency as a major component. The bill included provisions setting an energy code for commercial and state-owned buildings. West Virginia's score improved due to the state adopting stronger building codes. The other three most improved states in 2013 were Maine, Kansas and Ohio.

"Energy efficiency is a critical tool for cutting harmful carbon emissions and the best way to reduce energy bills for America's families,” said Secretary Moniz. “We applaud the continued progress in energy efficiency nationwide and stand ready to help states as they make their communities cleaner and more sustainable, while saving taxpayer dollars and fostering greater economic growth."

Several DOE officials and other experts will take part Nov. 20 in the Alliance to Save Energy’s Great Energy Efficiency Day in the nation’s capital.

"From Massachusetts, which continues to be the pacesetter in the race to cut down energy waste, to Mississippi, which is emerging as a regional star, state governments are proving that smart policy can still cross partisan divides," said ACEEE Executive Director Steve Nadel.

“California continues earning its reputation as an energy leader by instituting the nation's most advanced energy efficiency standards for buildings and appliances, and for pushing the envelope on ratepayer-funded efficiency programs,” said California Energy Commissioner Andrew McAllister. “Our standards alone have helped save ratepayers more than $75 billion since 1975, grown California's economy with local jobs, and protected our climate by reducing carbon emissions. ACEEE is providing a valuable service by recognizing energy efficiency leaders that other states can follow. We are proud to be one of the leaders."

Among other findings highlighted by the ACEEE:

The scorecard for the most part does not cover initiatives at the local or federal levels or by the private sector, though the ACEEE issued in September its separate City Energy Efficiency Scorecard (see map below). Boston took top honors, doing the most to save energy. Other top-scoring cities include Portland, Ore., New York City, San Francisco, Seattle and Austin. The next tier of top-scoring cities (Washington, D.C., Minneapolis, Chicago, Philadelphia and Denver) have also developed efficiency initiatives and are poised to rise in the rankings in future years.

“We couldn’t be more proud of our progress in creating a greener, healthier city,” said Boston Mayor Thomas M. Menino. “Boston is a world-class city, and we know that our economic prosperity is tied to its ‘greenovation,’ which has helped create jobs and improve our bottom-line. Reducing our energy use is just one smart step in improving the quality of life in Boston and around the world.”

Separate work on energy efficiency policy by the National Governors Association resulted in "An Energy Efficiency Primer for Governors," issued in September. 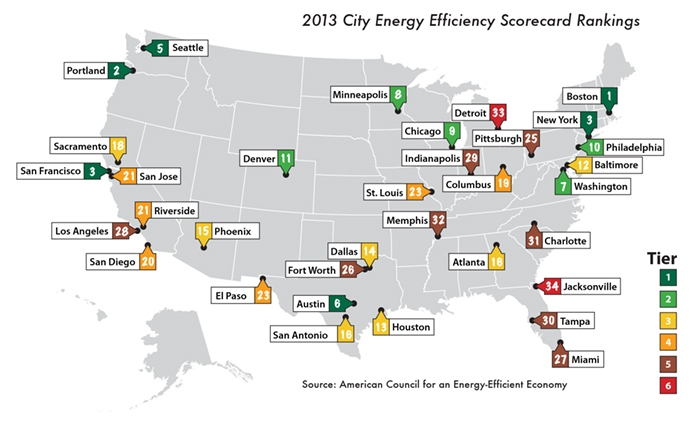