New energy projects encompass a wide range of
resources in the land where two continents meet.

Azerbaijan’s state-run oil company SOCAR plans to invest between $4.8 billion and $5 billion in the Star Refinery project, located in Aliaga Izmir on the Aegean coast of Turkey.
Photo courtesy of SOCAR
by ADAM BRUNS
M 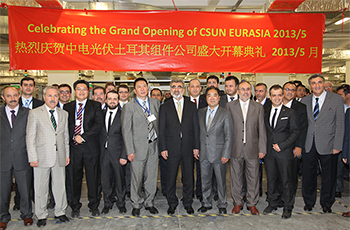 ore than $100 billion of investment will be required to meet growing energy demand in Turkey, says İlker Aycı, president of the Investment Support and Promotion Agency of Turkey (ISPAT). Projects are coming from both the fossil-fuels-based petrochemical sector and the renewable energy sector. Two new projects illustrate the potential of each end of the spectrum. They also illustrate the fact that developing economies aren’t waiting around for developed economies to act before making their own moves.

In May, Nanjing-based solar cell and module maker CSUN (China Sunergy) celebrated the grand opening of a new factory in Istanbul-Tuzla Free Trade Zone on the same day that a framework agreement with EPC and project developer Sybac for 100 MW of module supply and a cooperation agreement with TÜV Rheinland were signed, and that local banks AKBANK and ISBANK officially confirmed their support for CSUN Eurasia and its business in the Turkish and European markets.

“I would like to congratulate CSUN because they invested not only in module production but also in cell manufacturing in our country,” said Turkish Minister of Energy Taner Yildiz. “With this local production investors will benefit from higher feed-in-tariffs.”

The 22,000-sq.-m. (236,814-sq.-ft.) plant, which features equipment moved from the CSUN’s site in Shanghai, will have an annual module production capacity of 300 MW, and a cell manufacturing capacity will be 100 MW. To offer Turkish customers higher feed-in-tariffs, CSUN is currently also evaluating locally produced materials such as glass, frames and backsheets and expects to be compliant with Turkish local content regulations by the Q4 2013.

“Due to the increasing electricity prices and falling module prices all around the world, solar energy is becoming more and more attractive,” said Cagri Seymen, chairman of Seul Energy, a leading developer of solar PV parks in Turkey. “Istanbul is at the heart of this region and CSUN Eurasia eases the investment decisions for solar investors by helping with legal barriers, logistics and local incentive issues.”

China Sunergy expects the new plant to create over 1,200 job opportunities locally, and expects Turkey to become its second largest manufacturing base after China

“We are very proud of establishing CSUN’s first manufacturing plant outside of China here in Turkey,” said Tingxiu Lu, CSUN’s chairman. “This marks a very crucial and important step in CSUN’s continued drive for globalization.”

On the petrochemical side, interest is running high not only from multinationals, but from nations themselves.

Turkey’s largest petrochemical complex is Petkim, located near Izmir. After a failed first attempt at privatization that ran into political opposition six years ago, the second effort prevailed. Today the complex is owned by a Turkish-Azeri consortium headed by Azerbaijan’s state-run oil company SOCAR, which also is a major partner in the Trans-Anatolian Natural Gas Pipeline (TANAP). SOCAR plans to invest between $4.8 billion and $5 billion in the Star Refinery project, located in Aliaga Izmir on the Aegean coast. That’s just part of larger investments in energy production and logistics SOCAR projects to be made at the site that could total $17 billion by 2018.

The refinery is the first project to be issued a “Strategic Investment Incentive Certificate” since the introduction of Turkey’s new investment incentives system in 2012. Among the benefits accruing to the project because of this are value-added tax and customs tax exemptions, a 90-percent tax cut, and a 50-percent investment contribution.

Aliaga figures to be more developed in no time. SOCAR Turkey CEO Kenan Yavuz said the firm had invested $327 million at Petkim since it was privatized in 2008, and was investing $114 million currently. 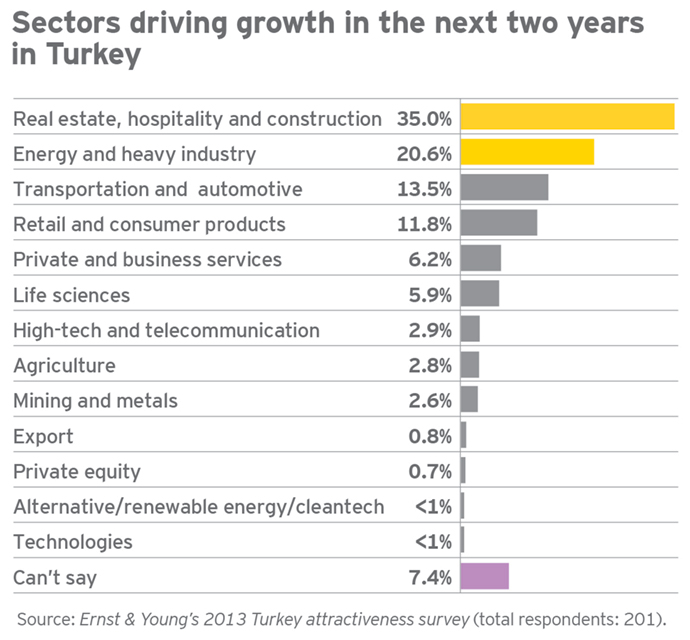 This graph from an Ernst & Young survey earlier this year shows how corporate end users view the prospects for Turkey’s energy sector.

“By 2018, we will have made $9 billion of investment in the Petkim Peninsula along with STAR Refinery, Petkim Container Port and STEP Power Plant,” he said in June. “Our target is to become one of the three biggest groups of Turkey in 2018 with a $15- to $20-billion turnover and 10,000 employees.”

The port and logistics investment — including a 28-year operations agreement signed earlier this year with Moller-Maersk Group’s APM Terminals — includes a 48-hectare logistics area. The container port will have annual capacity of 1.5 million TEU, with the potential to boost that capacity to 4 million TEU. The container port'''''''t phase is targeted to finish in 2015, with the second phase expected to be complete in 2016. The complex will employ 260 once operational.

"Through our port and logistics investments, we aim at making Aliağa, which is one of the most strategic industrial areas of our country, the largest integrated logistics center," said Yavuz in February when the APM agreement was signed. "The Nemrut Ports Area is the Turkey’s nearest point to Europe. It is further situated at the location where the Aegean Sea meets the Mediterranean in the industrial center of Turkey. We are aiming at making the Port of Petkim the largest integrated port and logistics center of the region, including the Port of Alsancak. With the investment Aliağa and the Nemrut Ports Area will become one of the most important logistics centers in world.”