Milestones Instead
of Millstones

Dangote Group's $9-billion complex in its home country of Nigeria could help erase memories of other grand plans that never seem to materialize. 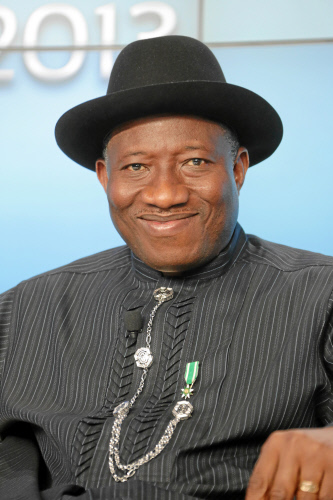 Goodluck Ebele Jonathan, President of Nigeria, at the World Economic Forum in Davos, Switzerland, in January. Jonathan's "Transformation Agenda" and Dangote Group's major investments both point toward a stronger future for the country.
Photo by swiss-image.ch/Remy Steinegger, courtesy of World Economic Forum
S

top us if you've heard this one before: A megaproject has surfaced in Nigeria.

But hear us out: This one has the backing of the richest man in Africa, whose vision appears to encompass bringing good fortune to his fellow Nigerians as well as his companies.

Last week in the nation's capital of Abuja, Dangote Industries Limited (DIL) signed a $3.3-billion loan agreement with a consortium of local and international banks. The loan will be used for the construction of the biggest petroleum oil refinery, petrochemical and fertilizer plants in Nigeria. "The plants," said a company statement, "which will cost a total of $9 billion, will generate up to 9,500 direct and 25,000 indirect jobs, in addition to reducing current volumes of refined fuel imports by around 50 percent, and will effectively stop the importation of fertilizer."

DIL said the project will be financed by $3 billion in equity and $6 billion in loan capital. The signing ceremony, which commits the first tranche of loans secured by Dangote, comprised a $3.3-billion term loan facility supported by a consortium of 12 local and international banks. The first facility was jointly co-ordinated by Standard Chartered Bank as the Global Coordinator, and Nigeria's Guaranty Trust Bank Plc as the Local Coordinator.

"With the refining capacity expected to reach 400,000 barrels of crude oil per day and producing a variety of refined fuel products from local crude resources, Nigeria will cut its current volumes of imported fuel products by a massive 50 percent," said the announcement. "The 2.8 million tonnes of urea will be channeled into growing the local agriculture sector, which is essential in producing healthy crops and promoting Nigeria and West Africa's agricultural development. The petrochemical plant will produce polypropylene which is a common component of most plastic and fabric products."

"This plant will further entrench Africa's role on the global map as not only a valued contributor for natural resources, but also a competent manufacturer of refined products and fertilizer," said Aliko Dangote, the president and chief executive of Dangote Group. "As a result, several African nations will be less reliant on importing fuel and fertilizer from foreign markets, reducing the negative impact of negotiating terms within increasingly turbulent international markets."

According to the Nigerian National Petroleum Corp., Nigeria is being positioned to control 10 percent of the global fertilizer market by 2017.

"Standard Chartered is proud to support the Dangote Group in a project which will significantly boost Nigeria's economic productivity and create valuable jobs with specialist skills from key growth sectors," said Bola Adesola, CEO of Standard Chartered Bank in Nigeria. "This project is an historic example of self-empowerment and leadership for the continent as a whole - and is made possible through effective partnerships between the Nigerian private sector, government and international financial institutions."

The complex is to be located at the Olokola Liquefied Natural Gas (OKLNG) Free Trade Zone in Ondo State, one of 25 export processing zones overseen by the Nigerian Export Processing Zone Authority (NEPZA). Fifteen of those are operational, and another 11 are awaiting government approval. Among the Olokola zone's strongest attributes is a major deepwater port. 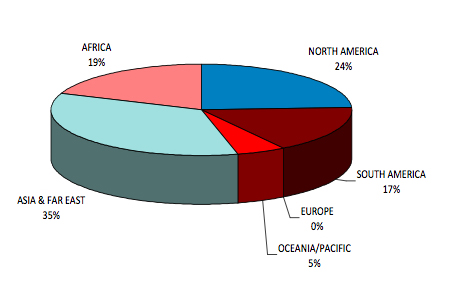 This graph depicts Nigeria'a crude oil exports by destination in June 2013, according to the Nigerian National Petroleum Corp.

According to a brochure about the zone, "a 10,000-hectare [24,710-acre] expanse of land has been acquired for the Port/FTZ. The Southern side of the site runs about 10km along the shore of the Atlantic Ocean while uncultivated fields border the Western, Eastern and Northern sides." Among the reasons it was chosen over other contending locations for a zone were its proximity to offshore oil blocks; its proximity to Lagos (45 minutes); its water depth contours and relative lack of ship traffic, and its "relatively superior security profile of Olokola area, far from restive minority youths and communities."

According to a speech by NEPZA Managing Director Gbenga Kuye in April, the nation's Free Zone scheme has generated 3,000 new jobs from the various enterprises located in the zones while new FDI totaled $664 million, led by ALSCON EPZ where $83 million is going toward the expansion of the company's aluminum smelter facility. That zone was followed in investment totals by the LADOL and Ogun Guangdong Free Trade Zones, respectively.

Kuye also noted that one of the major factors attributed in the delay for the grant of free zone status is the inability of most zone promoters to meet relevant requirements, "an example of which is the provision of resettlement plan of current dwellers/inhabitants of the proposed free zone," said a NEPZA release. "This is a pre-requisite condition that must be fulfilled in order to avoid unforeseen challenges that may hamper the future progress of the zone."

The Dangote Group's main revenue and profit contributor is Dangote Cement Plc (DCP), the leading integrated cement producer in Sub-Saharan Africa and largest company on the Nigerian Stock Exchange. "Given the cement subsidiary's strong market share along with its higher profit margins, DCP has been able to maintain a robust financial position, and thus assist in leveraging the Group on a conservative basis to undertake expansion projects on this large scale," said the company.

Among the statements made by Mr. Dangote was that the complex would be constructed by UOP, a Honeywell company, and finished by 2016. Asked to confirm the company's participation, a spokesman for UOP said, "For competitive reasons, UOP does not comment on projects it may or may not be involved in, except for those projects our company has announced through a press release."

Inquiries to Dangote Group have not received replies.

"Obviously, being the richest man in Africa, Dangote is the major player in Nigeria and in much of West Africa," says one knowledgeable observer from the World Bank. "If anyone can accomplish this, he can. He has deep pockets, close government relations, and knowledge of how to do business and get things done in the country."

Both the 2012 and 2013 "Doing Business" indices from World Bank Group ranked Nigeria 131st out of 185 countries in ease of doing business. In 2013 the country's lowest rankings are in the sub-categories of registering property and getting electricity, and its highest (38th) in obtaining credit, a 15-position jump from 2012. Among the business reforms noted by World Bank this year in the area of tax payments is a new compulsory labor contribution paid by the employer.

Nigerian Vice President Mohammed Namadi Sambo, in a release from the federal ministry of information, used the occasion of the loan agreement signing to call on investors to take advantage of investment incentives offered by the present administration of Nigerian President Goodluck Jonathan to venture into the Nigerian economy.

Dizeani Alison-Madueke, the Minister of Petroleum, noted that the event was fulfilling as the Nigerian banks came together to facilitate the venture, saying Dangote is the first to take a refinery to the private sector. She encouraged other investors to take a cue from Dangote and move into the petroleum and gas sectors.

This map showing the location of the OK Free Trade Zone shows its proximity to offshore oil blocks. Lagos is a 45-minute drive away.

According to a release from her ministry, Alison-Madueke explained that "the thrust of the two-pronged policy of gas-to-power and gas-to-industries is to drive linkages between the power and industrial sectors with the agricultural sector serving as a linchpin in the industrial sector on account of its enormous job creation potential and multiplier effect in the economy."

For a detailed breakout through June 2013 of monthly petroleum exploration and production statistics in Nigeria, visit this Web page of the Nigerian National Petroleum Corp.

Signs of the African Century?

The Dangote project comes along just after another megaproject slated for the same region, the Olokola LNG plant, saw Chevron, Shell and British Gas divest from the project over the past year. Press reports cited a statement from Chevron Nigeria alluding to the "fruitlessness of efforts over the last eight years for the project to mature into a Final Investment Decision (FDI)." Other reports cited taxation uncertainty and other concerns related to a new Petroleum Industry Bill from the Nigerian National Petroleum Corp. that still awaits passage.

But other mega-plans continue to move forward. Earlier this summer General Electric announced it would invest more than $1 billion in Nigerian operations over the next five years. The announcement took place at a groundbreaking for the General Electric Multi-Model Service and Manufacturing Facility at Calabar Free-trade Zone in Cross River State.

At the event, Vice President Namadi Sambo said, "The company's decision to build this facility here in Calabar, with Nigeria as a pivotal regional hub for the West African sub-region, amply demonstrates the strongest confidence in our economy." He added that the company's wide-ranging experience in energy, transportation and healthcare, will strengthen ongoing reforms in these critical sectors, under the Jonathan administration's "Transformation Agenda." 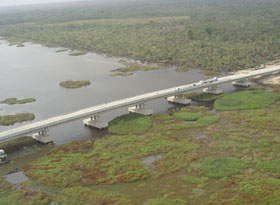 An archive photo shows some of the early infrastructure at OKFTZ.
Images courtesy of OKFTZ

Dangote — the individual and the conglomerate —meanwhile continue to exert their own positive transformations. In a recent speech entitled "Nigeria Beyond Oil," delivered by his chief of staff Joseph Makoju, Dangote called on government to use the nation's abundant petroleum resources to drive the industrialization of the economy, adding that it is only through industrialization that value is added to raw materials.

"We believe industrialization is the key to Nigeria's economic prosperity and we also believe Nigerians should drive the industrialization process," he said. "As a practical demonstration of our business philosophy, we have massive investments in the real sector both within and outside the country. Currently, we have over 13 subsidiaries in Nigeria and operations in 14 other African countries."

Among other developments, the Kogi State Government in July announced the allocation of 20,000 hectares of land in Kogi State to Dangote Group for a sugar plantation and refinery that is expected to directly employ 30,000 workers. And the Group is planning to invest $3.9 billion in additional cement production lines inside and outside Nigeria, including Ethiopia, Tanzania, Republic of Congo, Gabon, South Africa, Cameroon, Zambia and Senegal.