Stars of the Show

California leads the way in the latest tally of Energy Star buildings. 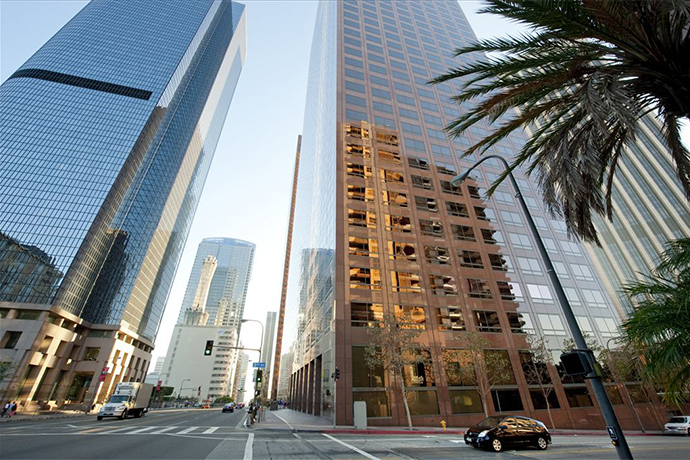 Los Angeles has more Energy Star certified buildings than any other US city.
Photo of Grand Ave. and 3rd St. courtesy of Visit California
by ADAM BRUNS
L

“The cities on this list demonstrate the economic and environmental benefits achieved by facility owners and managers when they apply a proven approach to energy efficiency to their buildings,” said the EPA.

"Not only are the Energy Star top 25 cities saving money on energy costs and increasing energy efficiency, but they are promoting public health by decreasing greenhouse gas emissions from commercial buildings,” said Administrator Gina McCarthy.

Los Angeles has remained the top city since 2008 when the EPA first released its list. It was one of six California cities in the Top 25. Washington, D.C. continues to hold onto second place for the fifth consecutive year. Atlanta moved up from the number five to number three. For the first time, Philadelphia entered the top 10, ranking ninth.

More than 23,000 buildings across America earned EPA’s Energy Star certification by the end of 2013. These buildings saved more than $3.1 billion on utility bills and prevented greenhouse gas emissions equal to the annual electricity use from 2.2 million homes.

The EPA also saluted Top Small Cities of 2014, led by Elizabethtown, Ky., with 53 Energy Star buildings, followed by St. George, Utah (36) and Chambersburg, Pa., and Owensboro, Ky., tied for third with 16 apiece. The Top Mid-Size Cities category was topped by three communities that made the Top 25 overall: San Jose with 83 projects, followed by Columbus, Ohio (77) and Louisville, Ky. (60). They were followed by Virginia Beach (57), Indianapolis (56) and Des Moines (54).

Commercial buildings that earn EPA’s Energy Star must perform in the top 25 percent of similar buildings nationwide and must be independently verified by a licensed professional engineer or a registered architect. Energy Star certified buildings use an average of 35 percent less energy and are responsible for 35 percent less carbon dioxide emissions than typical buildings. 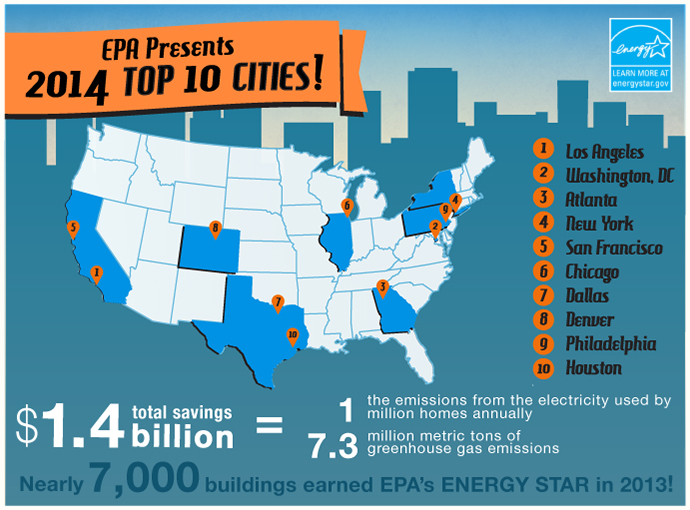 Infographic courtesy of the EPA

As part of the Better Buildings Challenge, Los Angeles is working to benchmark 250 of the city’s most energy-intensive facilities and develop a plan to improve building performance by 2020. More than 25 owners of large commercial buildings, including Transwestern, Kaiser Permanente of Southern California, Kilroy Realty, and the Children’s Hospital of Los Angeles, have joined the Challenge and are reporting their results annually to help others save money and energy.

Los Angeles Mayor Eric Garcetti was one of 10 mayors from major cities (all of them in the EPA’s Top 25) across the country who in January joined the Natural Resources Defense Council (NRDC) and the Institute for Market Transformation (IMT), as well as philanthropist and former New York City Mayor Michael Bloomberg, to announce a new, united effort designed to cut climate pollution and boost local economies in participating cities. Cities will look to the largest single source of climate pollution in the U.S. to achieve these goals: buildings.

“The key metric we're focused on is the amount of energy efficiency that contributes to the energy mix,” said Garcetti. “We know the best way to get a greener mix of power is to reduce our power, not put up more wind farms or solar. We want to get energy efficiency to 15 percent from our current 10 percent — not through a big slew of expensive programs, but by simply building a bridge.”

“In New York City, 75 to 80 percent of emissions come from buildings, not transportation,” said Bloomberg. “It’s the reverse of many other cities. We've ben able to get roughly half the landlords — about 2,500 of them — to convert from No. 6 heavy oil to natural gas, we got some banks to put up loans, and we've made a dramatic cut. There are over 2,500 buildings [still] to go.”

Bloomberg Philanthropies has partnered with the Doris Duke Foundation and the Kresge Foundation to put up $1 million a year for each of the next three years to help keep the momentum. Meanwhile, said Bloomberg and other mayors, there should be no monopoly on good ideas. 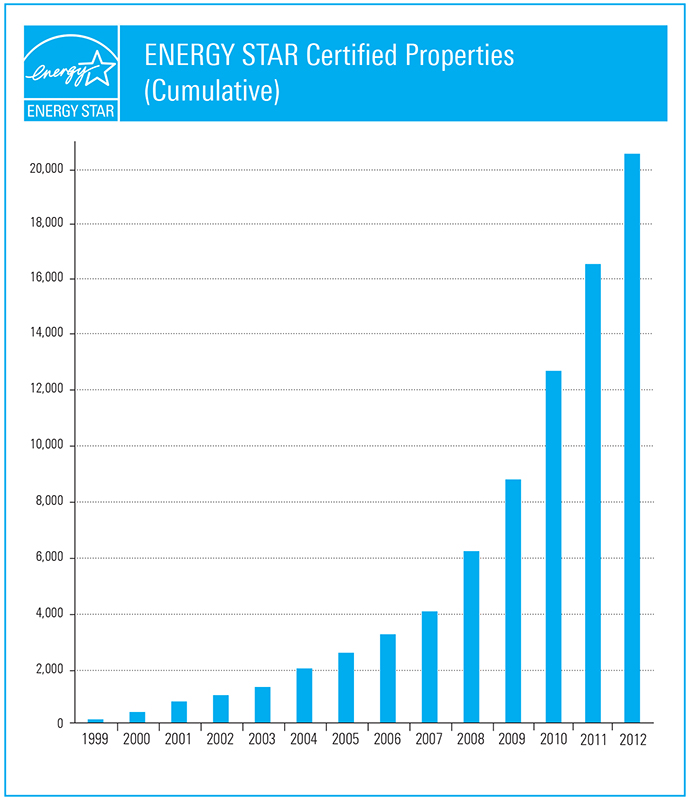 Growing awareness of energy efficiency is reflected in this graph. More than 23,000 buildings across America had earned EPA’s Energy Star certification by the end of 2013.
Graph courtesy of the EPA

“Each of us should feel free to steal ideas from each other,” said Bloomberg. “We're all in this together.”