Solar Impulse 2 hopes to fly around the world without fuel about this time next year. 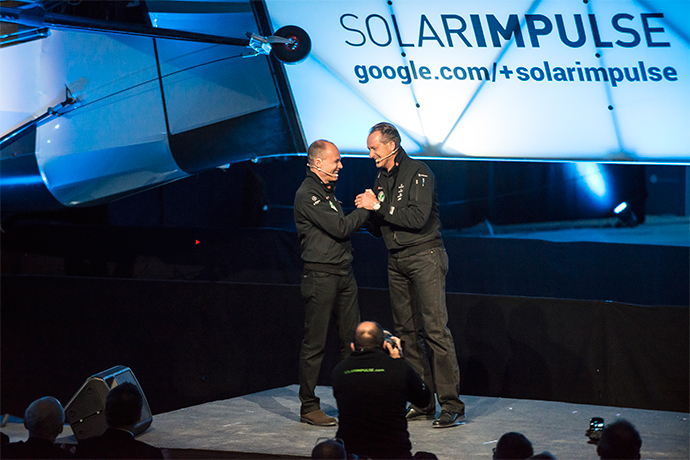 Solar Impulse co-founders Bertrand Piccard (left) and André Borschberg celebrate last week’s completion of the Solar Impulse 2 aircraft, which they plan to help pilot around the world a year from now.
All photos courtesy of Solar Impulse
by ADAM BRUNS
T

hey could be … the most interesting men in the world.

After taking America by storm last year with a cross-country solar-powered flight, third-generation visionary Bertrand Piccard and his pilot/consultant collaborator André Borschberg are at it again.

Last week in Payerne, Switzerland, the two men launched Solar Impulse 2, their new single-seater solar aircraft designed to make the first round-the-world solar flight — without any fuel — in 2015. Backed by 12 years of work and a technical team of 80, as well as sponsorship and technical contributions from such firms as Schindler, Solvay, Bayer, ABB and SunPower, the pair are primed to take the next step in a legacy of exploration that Piccard’s grandfather began in the 1920s.

“A vision counts for nothing unless it is backed up by action,” said Piccard, founder and chairman of Solar Impulse. “With eight world records for Solar Impulse 1, the first solar aircraft capable of flying during the night, crossing two continents and flying over the United States, we have shown that clean technologies and renewable energies can accomplish the impossible,”

“Now we need to go even further,” said Borschberg, the former McKinsey consultant who serves as co-founder and CEO. “Solar Impulse 2 will have virtually unlimited autonomy, and now we need to make sure the pilot is as sustainable as his aircraft. This is why the round-the-world flight will be as much a human as a technological feat.”

To complete the round-the-world flight, said the organization, “Solar Impulse 2 will have to accomplish what no other aircraft has achieved before: flying without fuel with only one pilot for five consecutive days and nights over oceans from one continent to another. This is the challenge for which the aircraft has been built.” 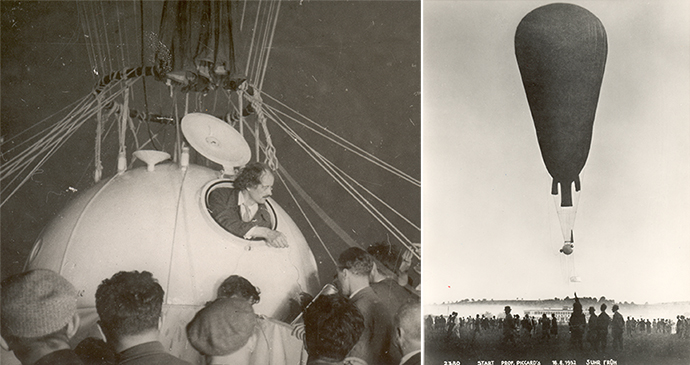 Piccard’s grandfather Auguste was a scientist with an exploratory bent all his own, seen here in the first pressurized cabin, and also taking off in the balloon FRNS on the 2nd ascent into the stratosphere on August 18 1932.

The single-seater solar aircraft has a huge wingspan of 72 meters (236 ft.) for its weight of just 2,300 Kg (5,000 lbs.), equivalent to the weight of a car. As for the wings, 144 ribs are carefully placed at 50-cm. (20-inch) intervals by Solar Impulse engineers. The upper surface of the wings is made of solar panels and the lower part with an ultra-light fabric. The wing spar is entirely made of carbon fiber honeycomb sandwich panels.

The 17,000 solar cells built into the wing supply four electric motors with renewable energy. During the day, the solar cells recharge lithium batteries weighing 633 kg. (2,077 lbs.) which allow the aircraft to fly at night and therefore to have virtually unlimited autonomy.

There is cockpit measuring 3.8 cubic meters, “every detail of which has been designed for a pilot to live there for a week,” says the organization. “However, for the sake of maximum energy efficiency, the cabin is not pressurized or heated — a further endurance challenge for the pilot.”

Okaaaay. Not exactly the same as attacking the latest version of “Flight Simulator X” from the couch.

The attempt to make the first round-the-world solar-powered flight is scheduled to start in March 2015 from the Persian Gulf. Solar Impulse then will fly, in order, over the Arabian Sea, India, Burma, China, the Pacific Ocean, the United States, the Atlantic Ocean and Southern Europe or North Africa before closing the loop by returning to the departure point. Landings will be made every few days to change pilots and organize public events for governments, schools and universities. During the circumnavigation of the globe, each pilot will fly for 4-5 days, requiring 2.4 kg. (5.2 lbs.) of food, 2.5 liters (84.5 oz.) of water and 1 liter (33.8 oz.) of sports drink per day. 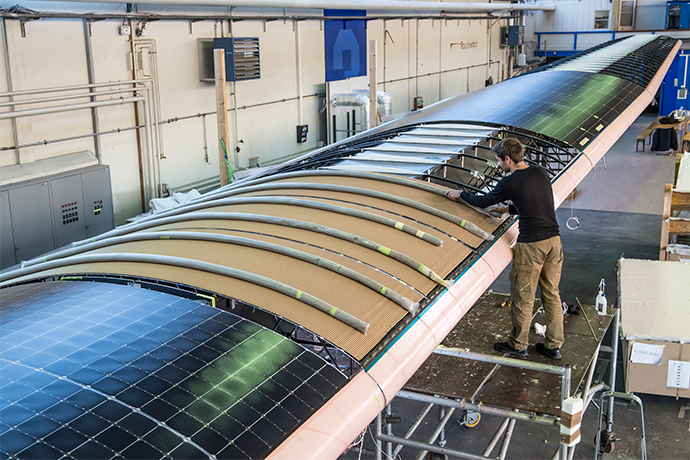 One of Solar Impulse’s 80 team members works on a wing.

“Solar Impulse is a unique adventure aiming to put emotion back into the heart of scientific exploration,” says the company’s mission statement. “Solar Impulse is also an airborne laboratory making way for innovative technological solutions capable of meeting today’s challenges head on. And it is a vision which drives each one of us to become a pioneer on a day-to-day basis.”

Among the innovations and their sources to be on board the aircraft next year:

But the innovations are as much about human psychology as technology. In Dübendorf, Switzerland, in December — at 8 in the morning the day before the year’s shortest day Dec. 20 — Piccard completed what must have felt like the longest day: a 72-hour flight simulation in a full-scale mockup, staying at the controls for all three uninterrupted days. The battery of tests ran the gamut: “Fatigue, cockpit ergonomics, nutrition, use of the toilets, exercises to prevent thrombosis, vigilance and the ability to pilot the aircraft in a state of sleep deprivation were all assessed,” said a Solar Impulse press release.

"Seeing so many doctors around the Solar Impulse reminded me of my first profession,” said Piccard, whose initial medical degree included specializations in both psychotherapy and psychiatry, “although this time round I was the patient." He used self-hypnosis techniques to remain alert, manage his fatigue and sleep, truck-driver style, for 20 minutes at a time, 35 times in total — for a total of 11.6 hours of sleep in those three days.

Piccard’s grandfather and father were Swiss explorers and scientists in their own right. Bertrand in 1999 made the first ever non-stop round the world balloon flight, which was also the longest flight in terms of duration and distance in the history of aviation. A pioneer of ultralight flying in the 1970s, he has championed clean technologies. He also was a teacher and supervisor at the Swiss Medical Hypnosis Society. He teamed up with André Borschberg to officially launch the Solar Impulse project in 2003. For his part, Borschberg, 60, flew for 20 years in the Swiss Air Force before graduating from the Ecole Polytechnique Fédérale de Lausanne (EPFL) as an engineer in mechanics and thermodynamics, getting his master’s in management from MIT’s Sloan School, and then developing and leading numerous technology projects, companies and start-ups as both investor and entrepreneur.

The idea from the start has been to think of the future:

“Adventure in the 21st century,” Piccard has said, “consists in using human creativity and the pioneering spirit to develop the quality of life to which present and future generations are entitled.” 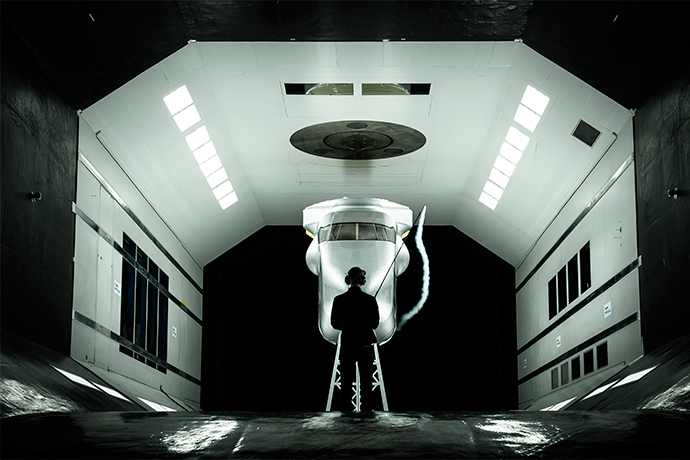