'I'm Very Disappointed in You'

The United States knows it could do better, says a new report on global energy efficiency. 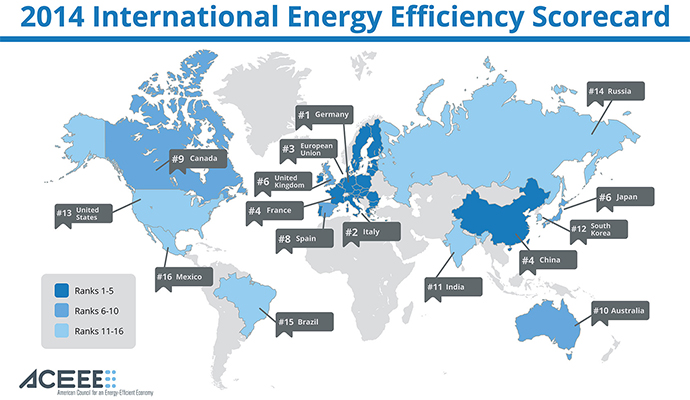 ermany comes in first in a new energy efficiency ranking of 16 of the world's major economies, followed by Italy, the European Union as a whole, China, and France, according to the 2014 International Energy Efficiency Scorecard published July 17 by the nonprofit American Council for an Energy-Efficient Economy (ACEEE).

The report finds that "there are substantial opportunities for improved energy efficiency in all economies analyzed, including the US, which ranked 13th out of 16 nations — behind countries such as China, Canada, and India."

"Germany is a prime example of a nation that has made energy efficiency a top priority," said ACEEE Executive Director Steven Nadel. "The United States, long considered an innovative and competitive world leader, has progressed slowly and has made limited progress since our last report, even as Germany, Italy, China, and other nations surge ahead."

"We see this as a validation that Germany's measures are bearing fruit in its ongoing efforts to transition towards a low-carbon and energy-efficient economy," said Dr. Philipp Ackermann, Minister and Deputy Chief of Mission, Chargé d'Affaires, Embassy of the Federal Republic of Germany said. "At the same time, we will continue to strive for further improvements. Energy efficiency is the second pillar of Germany's transformation of its energy system alongside the expansion of renewable energies. Every kilowatt-hour of electricity that is not consumed saves on fossil fuels and the construction of power plants and grids."

While many utilities either grumble or make diplomatic "wait and see" statements about the EPA's newly proposed carbon pollution standards for power plants, the ACEEE says those standards "would be a major stride in the direction of greater energy efficiency in the US," among other international best practices that could be implemented.

ACEEE divided the 31 metrics across four groupings: those that track cross-cutting aspects of energy use at the national level, as well as the three sectors primarily responsible for energy consumption in an economically developed country — buildings, industry, and transportation. The top-scoring countries in each grouping are: EU, France, and Italy (three-way tie for national efforts); China (buildings); Germany (industry); and Italy (transportation). The ACEEE did not explain why it chose to include the EU as a grouping, and not NAFTA.

The ACEEE couldn't contain its disappointment in its home country.

"The inefficiency in the US economy means a tremendous waste of energy resources and money," says the report. "Across most metrics analyzed in this International Scorecard, in the past decade the United States has made limited progress toward greater efficiency at the national level. The overall US score of 42 is less than half of the possible points and is 23 points away from the top spot. Further, the United States falls behind Canada, Australia, India, and South Korea. These scores suggest that this list of countries may have an economic advantage over the United States because using less energy to produce and transport the same economic output costs them less. Their efforts to improve efficiency likely make their economies more nimble and resilient." 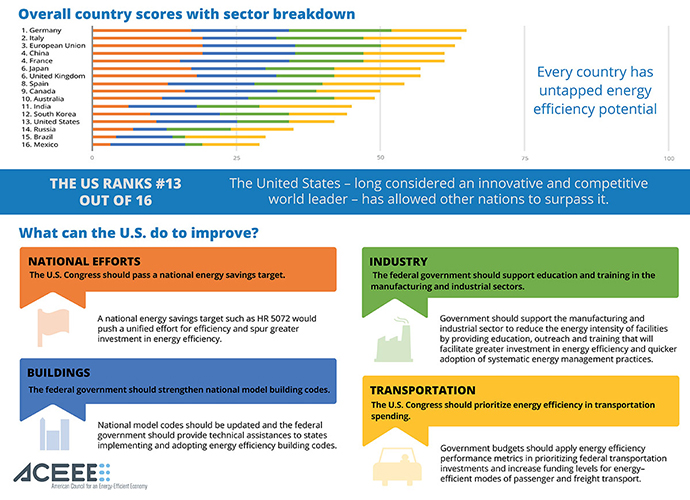