A new report from JLL documents how US shale zones reach well beyond the oil patch. 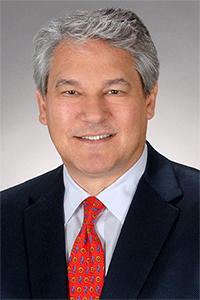 Bruce Rutherford is international director and head of the oil & gas practice for JLL.
Photo and all images below courtesy of JLL
E

nergy-related employment grew by 10.7 percent over the past five years, and is projected to grow by another 5 percent by 2020. And there's no doubt where most of the $80 billion in expected investments over the next six years is going: to places hot with shale oil and gas activity such as North Dakota's Bakken formation, the Marcellus formation in Pennsylvania and other states, and multiple formations, including the Eagle Ford and Permian, in Texas.

But it doesn't stop there. According to the new 2014 North American Energy Outlook, released by JLL (Jones Lang LaSalle's new name since March) earlier this month, major metropolitan areas are benefiting too, with "surge cities" growing at more than twice the pace of their peers. (See below for a breakdown of boomtowns and their accompanying surge cities.)

"The energy boom is having a dramatic effect on the infrastructure of these boom towns and on the economies of the hubs that support the oil and gas business," said Bruce Rutherford, international director and head of the oil & gas practice for JLL. Sites like Williston, N.D.; Midland, Texas; and Hobbs, N.M., have their own boom-town opportunities and challenges. But the surge "also creates a business that has to be supported regionally, which means jobs and a surge of economic activity in cities like Houston, Denver, Dallas and Pittsburgh," said Rutherford. "We are just scratching the surface of the benefit on our local economies."

A recent ruling by the US Dept. of Commerce to allow some light-oil exports could signal another watershed moment. "Increase in crude production could lead to a nearly $73-billion rise in the US GDP in 2016," said Rutherford on the release of the report. "That means more jobs and economic growth in these communities."

In an interview, Rutherford says it's not about the fracking technology, which has been around for decades. The boom is coming from directional drilling, "the ability to direct the drill bit to wherever the technology tells it to go, at extreme depths and extreme temperatures."

But there's growing opposition, he says, popping up in certain communities in Texas and Colorado, and in New York.

"Major energy companies and downstream industries that rely on inexpensive natural gas are really going to have second thoughts about relocating to a place where local laws limit, curtail or prevent their production of new energy sources," he says. "I say, 'production,' because this has gotten to be such a science that it's not really wildcatting anymore. The last 3,341 wells drilled in Texas in 2012 hit oil." 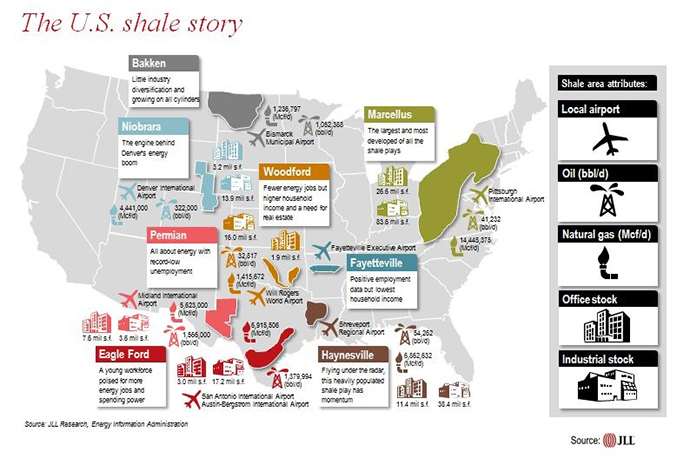 Another issue he raises, though it may be in the process of fading, is increased disclosure requirements for chemicals used in the hydraulic fracturing process, stemming from fears of groundwater contamination. "The public, rightly so, is saying, 'Tell us what chemicals are going into the earth,' " says Rutherford, though water and sand make up 98 percent of it. "Some companies are holding back from disclosing, but companies like Baker Hughes and Halliburton are beginning to disclose, and once they do, a lot of that public fear will go away.

Water itself is becoming a large issue, as fracking uses such huge amounts. But Rutherford is sanguine about the outlook, and sees yet more engineering ingenuity coming to the fore:

"The industry is responding to that, because water is becoming one of the single largest costs of fracturing a well," he says. "Companies are specializing in recovering, cleaning and treating the water at the well site, or centralizing it. But right now it's a critical issue. In Oklahoma and Kansas, people are starting to worry about depleting the water table."

He says some of these worries are unwarranted because the water comes from so far below the water table. Industry has been injecting it into old wells, though in Oklahoma there has been some evidence that the injection itself may be triggering seismic activity. But "as we learn to treat this water, and reuse and reuse it, I think in two to three years, this issue will go away."

"Another concern the industry has is just getting the resources in a timely fashion to exploit the leases you've paid dearly for," he says. "Most leases contain clauses that say, 'If you don't drill and produce oil and gas that produces royalties, you lose the lease.' Once a company buys up acreage for mineral leases, they have a serious speed-to-market issue, which in turn creates these man camps."

Those in turn create infrastructure, social and law enforcement challenges.

"The transportation manager in Williston told me they were issuing $84,000 a week in overload truck traffic tickets in his county," says Rutherford. "They're trying the best they can to pave the gravel roads, but there's only so much they can do. So the energy companies are now grappling with the inherent challenges that come with growth, things like the development of really high-quality multifamily and single-family housing so the companies can provide a place where workers can literally move their families." 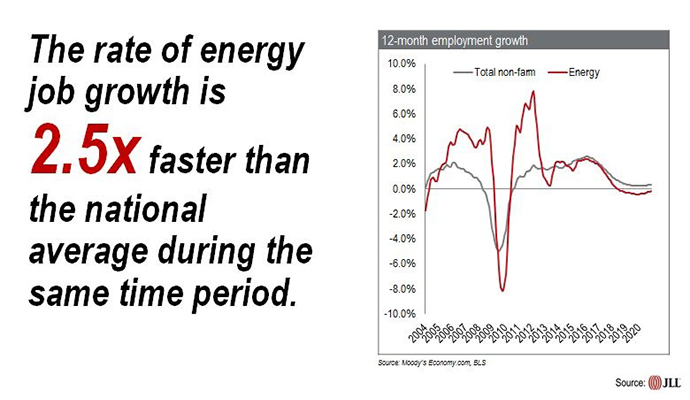 Rutherford says between 10 and 20 percent of energy field workers become permanent. That gradually building residual population is going to want the services, schools and retail choices anybody would want. And energy companies will need to do their share.

"Communities want them to help build these roads," for instance, says Rutherford, "and some companies may have to step up to it."

"Retail is only now beginning to respond," says Rutherford. "Here's something a lot of people don't realize — Energy workers earn 58 percent more than workers in the balance of the economy, and almost 110 percent more in Texas. That increase in pay creates a disposable income that allows them to buy more trucks, groceries and big-screen TVs. In the US, where consumption is 70 percent of the economy, the downstream effect of energy workers can be significant. So you have this tremendous unfulfilled demand for new retail." 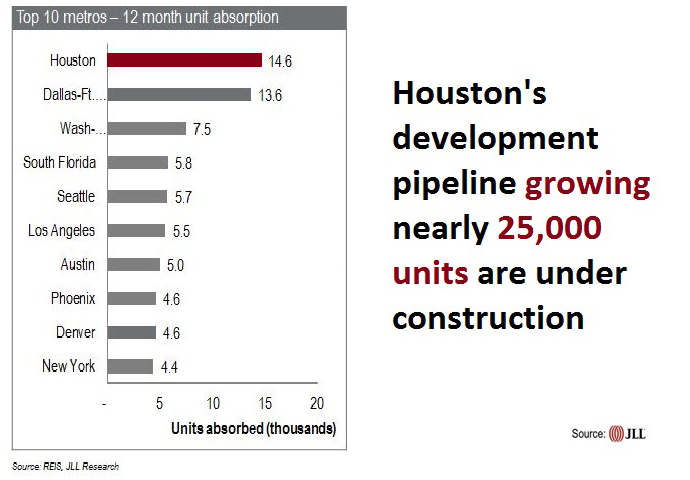 These are almost uniquely North American and US issues, says Rutherford. Of the 46,000 wells drilled in 2012 in the US, 12,000 were in Texas. Meanwhile, only 4,000 wells were drilled on the rest of the planet, and many of them were offshore.

"Even though places like Great Britain and Poland are revisiting this issue, they are so far behind the US, they're not even a speck on the horizon," he says. "They don't have the technology, and more importantly they don't have the property rights that allow the companies to make a deal and drill. In China, they desperately understand they need to develop this, and they have no infrastructure to get this heavy equipment to places they would like to drill. I anticipate we will see this technology spread around the globe, but the US will have this energy advantage for decades."

The collateral natural gas production is helping create low-cost energy for manufacturing he says, with energy costs a third to a quarter of costs in Europe and the Asia Pacific. Add that to a mobile American worker population and you have a recipe for being the best-cost producer.

"The only exception is China," says Rutherford, "and we are gaining on China like Secretariat coming down the home stretch." The industry is not without its issues and problems, he says, but he's convinced US innovation, engineering and solutions will allow the country "to enjoy the benefits for decades and decades." 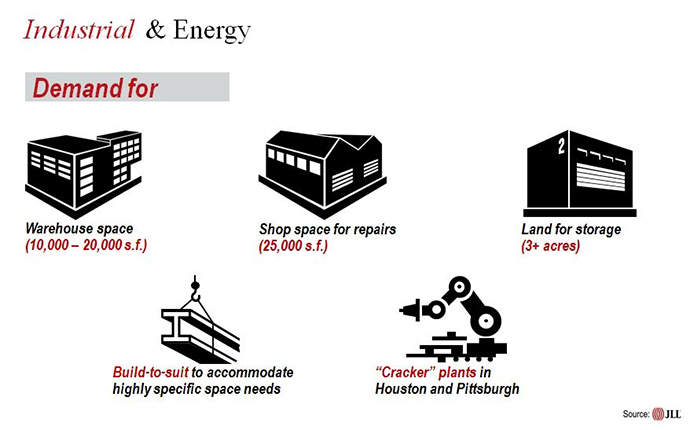 Here's how critical infrastructure is progressing in each shale zone, and its ripple effect on neighboring major cities, directly from JLL's report: 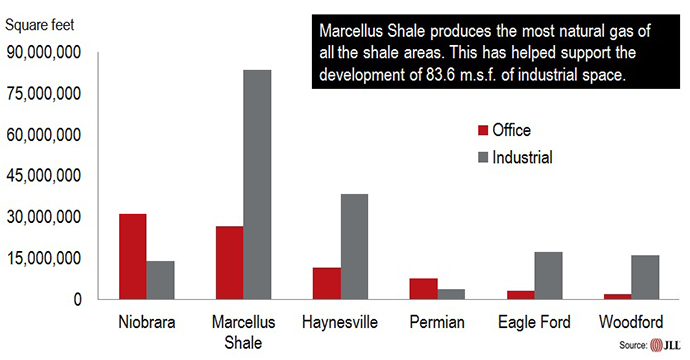