A new survey sheds light on the next energy frontiers for data center operators. 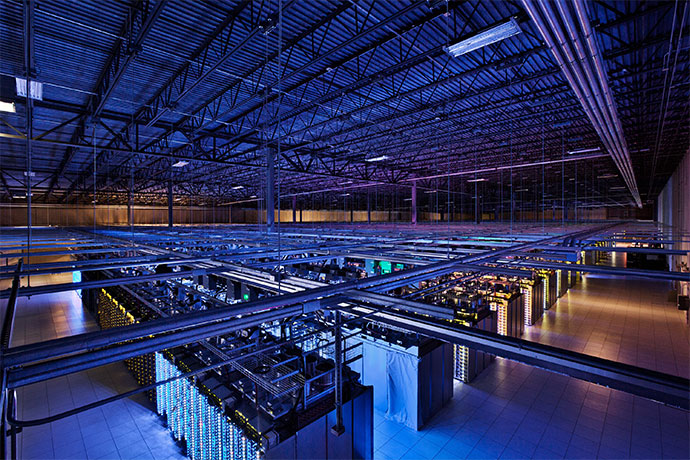 ven as its hotels and casinos pursue sustainable practices and LED lights begin to light its famous Strip, Las Vegas isn't known for its power usage conscience. But Sin City was where energy efficiency and renewables were top of mind last month, according to a survey by Mortenson Construction of corporate data center executives, data center developers and operators, and IT providers at the 2014 Data Center World conference there in November.

The Minnesota-based firm already knows a thing or two about data centers, having completed more than 360 mission-critical projects representing 16.8 million sq. ft. of facilities. And, wouldn't you know, its personnel know quite a bit about renewables too: The firm constructed its first wind farm way back in 1995 in Adair, Iowa, and since that time has been at the center of constructing more than 140 wind and solar projects generating more than 14,000 megawatts of renewable power across North America, even publishing two children's books about renewables along the way. Its most recently completed project is the Windthorst II wind farm south of Dallas owned by OwnEnergy and asset manager Blackrock, Mortenson's 26th wind farm project completed in Texas.

According to the data center survey, 84 percent of respondents feel there is a need to consider renewable forms of energy, such as wind and solar, to manage future needs. At the same time, their top priority for facility improvement is greater energy efficiency, all in the service of that ultimate measure of data center conscience and cost, the Power Usage Effectiveness (PUE) rating. PUE measures how much overhead energy is required to house and cool the computers inside a building relative to the amount the computers consume themselves. "A PUE of 2.0 means that for every watt of IT power, an additional watt is consumed to cool and distribute power to the IT equipment," explains Google, known for its pioneering efforts in data center sustainability. "An ideal PUE would be 1.0, meaning that all of a data center's power is consumed by the components that do the actual work that the data center is meant to do."

Nineteen percent of Mortenson's respondents said being more energy-efficient was the one thing they'd most like to change about their data centers, and 15 percent saying that top change would be a better cooling/HVAC system. Most attention-grabbing for communities, however, is that 12 percent want a better location: 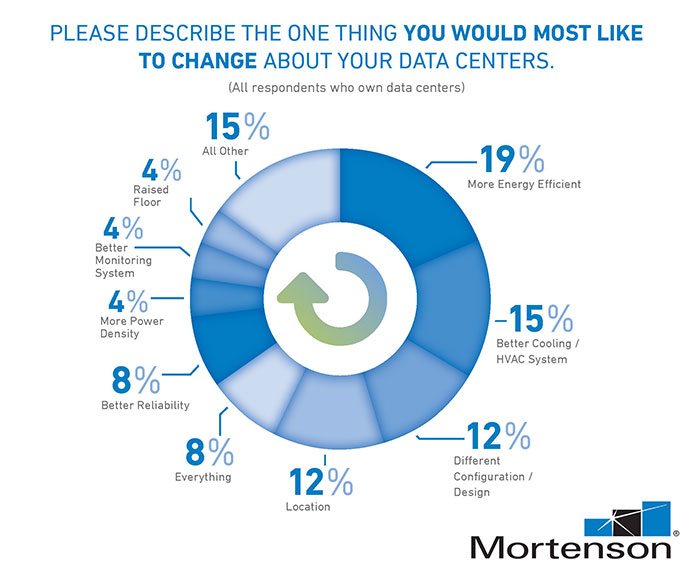 As for PUE, data center pros are looking to liquid cooling, hot island containment and data center information management systems (DCIM) for help, and 47 percent believe an average PUE of 1.3 or better is achievable in the next five years - 25 percent better than the 1.7 reported by The Uptime Institute in June 2014. (The average PUE for all Google data centers is 1.12.) When asked which features of DCIM they leverage in their daily operations, 80 percent of respondents mentioned energy, and 72 percent mentioned power distribution management.

Renewables are Cool, But Cold May Be Cooler

"Worldwide data usage continues to grow, which requires more infrastructure and power to support it, so it's vital that we leverage innovation to help balance energy demand and supply," said Scott Ganske, director of operations for Mortenson's Mission Critical Group. "There are a number of promising technologies that will drive energy efficiency forward in the next few years; and renewable energy increasingly makes economic as well as environmental sense for the energy supply chain. With costs dropping and operating efficiency rising, we believe renewables are rightly attracting interest from data center operators."

Renewables represented 12 percent of US electricity generation in 2012, and are expected to climb to 16 percent by 2040, according to the US Energy Information Administration. According to Mortenson, costs for producing wind have decreased 58 percent and solar power by 40 percent in the past five years, and they continue to fall, making renewables more cost-competitive in many markets.

"At the same time, availability is steadily improving," the survey reports. "Wind farms, for example, generate power 50 percent of the time now, up from 35 percent in 2007. In fact, several leading technology firms in the U.S. are already investing in power purchase agreements (PPA) with wind energy producers to lock in energy costs over the long term. Mortenson has built several of the wind farms, located in Illinois, Iowa and Texas, that are a part of those PPA deals."

Google is covering all bases. The search giant, says Mortenson, reportedly has invested more than $1 billion in renewable energy, and it's also reportedly proposing "a new tariff to buy renewable energy directly from utilities, a model it hopes will help scale renewable energy for data centers and other big energy consumers." Another option is direct off-grid supply of renewable power from a renewable power plant close to the data center. "Creating smaller, on-site wind or solar options presents possibilities for owners in the future but needs more development," says Mortenson's report.

Google in September announced a €600-million (US$773-million) investment in a new data center in Eemshaven, Netherlands, where the company has invested in other data centers in the past. Expected to be fully operational by the end of 2017, the facility will be free-cooled using natural assets such as cool air and grey water, and will be run on renewable energy.

The graph below, furnished by Mortenson, demonstrates the prominent role energy plays in data center location decisions. Among the comments from respondents when asked about site selection, one said, "We look for cooler climate locations where we can reduce energy costs," while another noted, "We want cheap-ish electricity and naturally cold air." 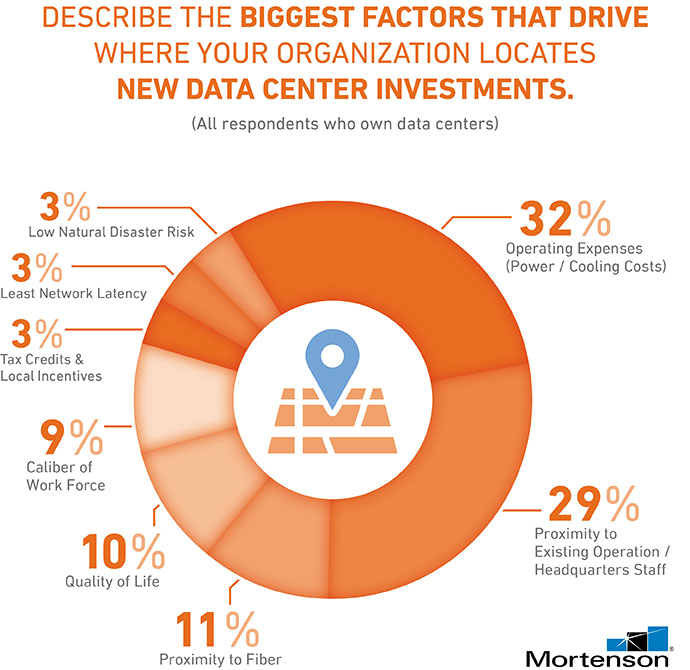